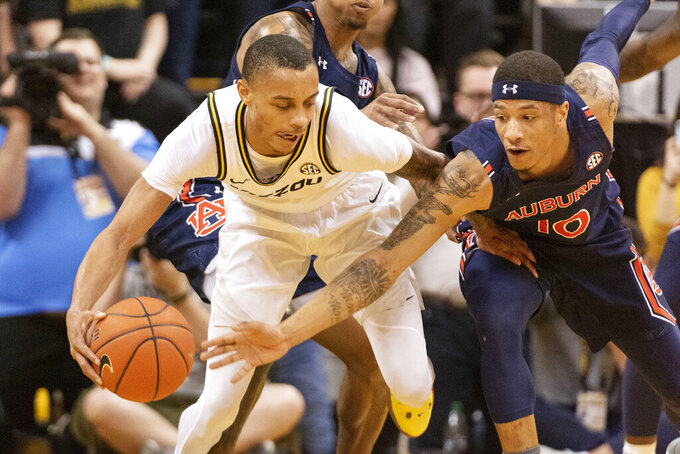 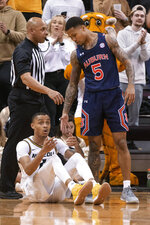 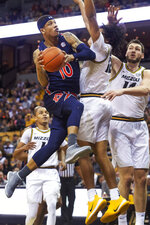 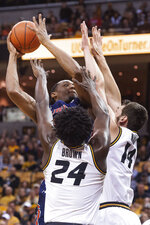 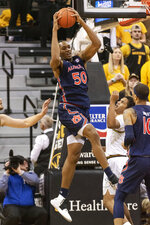 The pair looked comfortable together on Saturday, each scoring 28 points as Missouri beat No. 11 Auburn 85-73.

“It was a little weird at first, weird playing off the ball, but I love having X out there with me,” Smith said. “When we’re both being aggressive, it gives us a great chance to win games.”

Smith and Pinson started playing together in games more often in the last two weeks after starting guard Mark Smith was sidelined with a back injury. The slender Pinson has a quick first step and can elevate for emphatic dunks. The bulkier Smith muscles into the lane and patiently tricks defenders into leaving their feet with pivots and pump fakes.

“Missouri did a good job of switching,” Pearl said. “They were creating matchups for us to take advantage of with drives and post-ups, but we weren’t getting open shots because they were switching on the perimeter.”

Smith and Pinson combined to score 33 points on 12-of-15 shooting in the first half. Pinson freed himself with a crossover dribble and sank a 3-pointer at the halftime buzzer, giving Missouri a 45-32 lead.

“It’s almost impossible to stay in front of him without somebody helping you,” Smith said. “I think he’s one of the toughest guys to guard in the league."

Pinson took a long break after drawing his fourth foul with 13 minutes left in the game, but Smith picked up the slack, especially at the foul line, where he made 12 of 13 free throws.

“He’s sneaky," Pinson said. "You’ll think he’s tired, then, boom, he cuts backdoor. Or he’ll pump-fake and get you up in air and draw a foul. He’s just an incredible player.”

Auburn cut its deficit to five points early in the second half, but momentum changed when Devan Cambridge was ejected with 10:01 remaining. He was called for Flagrant 1 and 2 fouls on the same play. Cambridge pulled Missouri’s Javon Pickett down and then stepped on his leg while he was sitting on the court. Pickett said the officials initially called the foul on him, but after a lengthy review, they called the flagrant fouls on Cambridge.

Pickett and Smith combined to make 3 of the 4 free throws. Missouri then got possession of the ball, and Torrence Watson made a 3-pointer. The total damage from the play was six points, giving Missouri a 62-46 lead.

Pearl was asked if Auburn was worn down after winning three straight overtime games.

“It’s a fair question,” Pearl said. “If I look tired, I might be. And our guys might be. But don’t allow that to take a thing away from Missouri.”

Missouri: The Tigers are showing signs of a late-season surge. After beating Arkansas in overtime on Feb. 8, they led 25th-ranked LSU on the road for most of the game Tuesday before losing 82-78. The victory over Auburn was Missouri’s first win over a ranked team in five tries this season.

Auburn: Freshman star Isaac Okoro, who injured his hamstring Wednesday against Alabama, didn’t make the trip to Missouri. Okoro averages 13.1 points and 4.8 rebounds. He was replaced in the starting lineup by fellow freshman Allen Flanigan.

Auburn: At Georgia on Wednesday.