Stefanovic leads No. 4 Purdue past Northwestern 80-60 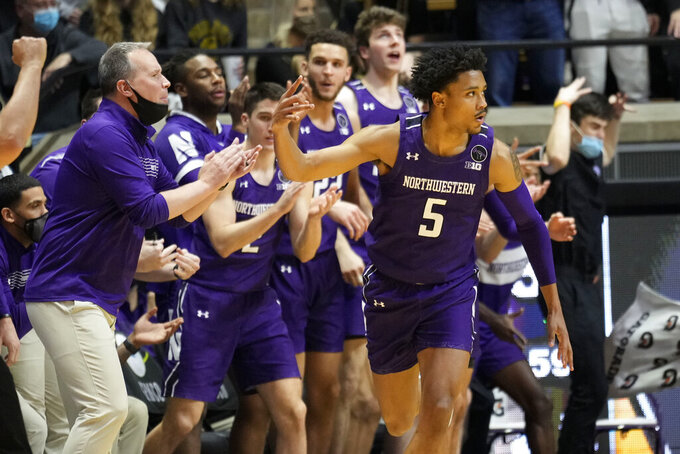 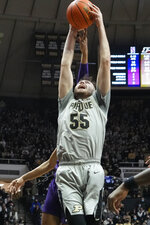 The Boilermakers took the cue and finished strong.

Stefanovic made a season-high six 3s on his way to 22 points, and Purdue beat Northwestern 80-60 while playing without Jaden Ivey.

“You take away your leading scorer and there's going to be more opportunities to get shots," Stefanovic said. “Luckily, I was able to make some early and get going and then these guys got going, too."

With Ivey sidelined by an injured hip flexor, Stefanovic stepped up. But he had plenty of help.

Trevion Williams and Zach Edey each finished with 12 points and 10 rebounds. Eric Hunter Jr. added 10 points as coach Matt Painter tied Ward “Piggy" Lambert for second on the school's career victories list with his 371st win at his alma mater. Painter and Lambert also are fifth in Big Ten history.

Purdue (16-3, 5-3) has won 10 straight in the series, bouncing back nicely after losing at Indiana on Thursday.

The Wildcats were led by Boo Buie with 17 points. Pete Nance and Robbie Beran each scored nine for Northwestern (9-8, 2-6), which has lost six of seven and has never won a road game against a top-five opponent.

“You kind of feel if you hold the two big guys to 24 points, you've got a chance," coach Chris Collins said, referring to Edey and Williams. “But they still got to 80 points because of what the other guys did."

Stefanovic made 4 of 5 shots, all from 3-point range, and all four of his free-throw attempts in the first half. His third 3 spurred a 9-0 run that helped the Boilermakers to a 29-15 lead, and he scored seven more points in the closing minutes of the first half to give Purdue a 40-28 advantage.

Northwestern cut the deficit to five when it opened the second half with seven straight points, but Purdue eventually went on a 16-5 run to open a 64-47 lead with 8:03 to play.

“I think Sasha got us off to such a good start without Jaden, you just wanted to come out and play hard, play with an edge," Hunter said.

With Chase Audige dealing with an apparent right ankle injury and Nance in foul trouble, the Wildcats couldn't get closer than eight the rest of the game.

Northwestern: For the first time in school history, the Wildcats faced three consecutive top-10 teams. The problem Sunday: They lacked the size or strength to match up inside with Purdue's big men. And when they tried to defend the post, the Boilermakers beat them from long range.

Purdue: On a rare day when the Boilermakers sophomores were mostly held in check, two seniors — Stefanovic and Williams — helped them rebound from their third loss of the season. Stefanovic started the day shooting 40% from beyond the arc. He finished 6 of 10 from long range.

The loss to the Hoosiers probably will send the Boilermakers out of the top five. But Sunday's victory could mitigate how far they slide. Purdue's three losses this season came on a half-court buzzer-beater at Rutgers, a five-point home loss to Wisconsin and a three-point road loss against the Hoosiers. That should be enough to keep the Boilermakers in the top 10.

Painter had no update on Ivey's status following the game.

Ivey said he played hurt in Thursday's loss. Still, he scored 19 of his 21 points in the second half before missing two shots in the final seven seconds — one to take the lead and one to force overtime at the buzzer.

“Whenever they say he can go, he'll go," Painter said. “We'll see if he can go Thursday or not."

Purdue: Heads to Iowa on Thursday.