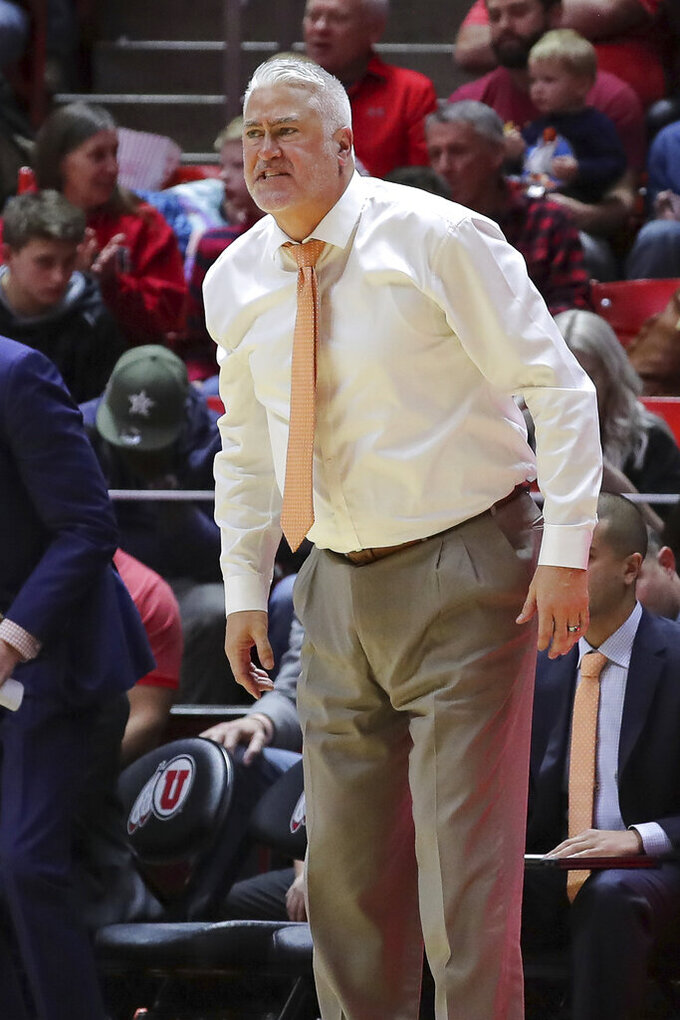 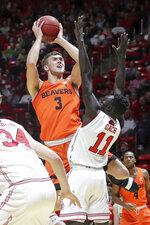 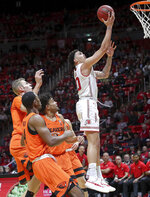 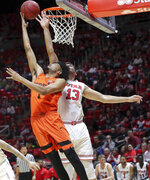 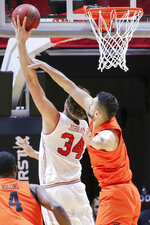 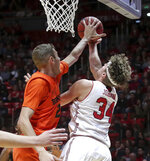 SALT LAKE CITY (AP) — Facing a frantic Utah comeback, Tres Tinkle looked to the Oregon State bench. His eyes met his father's and he said, "I got this."

The Beavers ran the clock down and gave the ball to Tinkle above the top of the arc. With two Utes watching him closely, Tinkle dribbled to his left, rose up and drained a 3-pointer with 1:43 remaining.

"Your key guy's got to step up when the game's on the line," OSU coach Wayne Tinkle said. "I was very, very proud of what Tres did there to close the game out."

"My pops told me to go get the ball and showed his confidence in me. I was reading the defense and just had to shoot that," Tinkle said.

The elder Tinkle has seen this show before. From the time his son was playing in grade school, he's never been shy in the biggest moments. But the 6-foot-8 forward has taken that swagger to a new level in recent weeks.

"There's been something that's been brewing with his confidence," Wayne Tinkle said, while citing a sprained ankle for his lower output in the last few games. "When it counted most, he'll make the plays."

Ethan Thompson and Kelley had 13 points to help the Beavers (14-7, 6-3 Pac-12) win their third game in the last four to stay near the top of the conference standings.

Timmy Allen scored a career-best 24 points and Sedrick Barefield had 19 points for the Utes, who dropped a pair to the Oregon schools at home.

"We got stops at our end, but then they stripped the ball," Utah coach Larry Krystkowiak said. "I think toughness comes into play. I told our team that. We need to be tougher."

Tinkle, the conference's leading scorer, made 10 of 15 shots, including three 3-pointers, and had six rebounds and four assists (and six turnovers).

"Tres Tinkle, I have known him since he was a little kid in diapers," Krystkowiak said. "He stepped up with that three from about 28 to 30 feet away when the building was alive when we were down four at the time and that is a moment of truth time and I don't know how we guard it much better."

Kelley became Oregon State's all-time single season leader in blocked shots in his first year in orange. Kelley passed Eric Moreland, who held the record with 73 in the 2012-13 campaign, with his third block of the game midway through the second half.

Allen, who rallied the Utes with his emotion and ability to get to the basket, made a twisting left-hand layup to cut the Beavers' lead to 71-67 with 2:13 to play. But Tinkle hit his big 3 and quelled the rally.

Barefield was determined to get one right back but Kelley rejected the Ute guard.

"I had my eyes on Barefield and was going to do everything I could to make sure he didn't score there. He's a great player and had to get there when I saw him headed to the rim," Kelley said.

Tinkle then blocked Riley Battin on a 3-point attempt moments later and made two free throws on the other end to clinch the victory.

From a 9-all tie, the Beavers held the Utes scoreless for more than four minutes and tallied 14 consecutive points, capped by Antoine Vernon's three free throws to make it 23-9.

Utah whittled the lead back to six, but Tinkle's inside-outside game powered the Beavers back to a commanding advantage. Just after the half, Ethan Thompson staked OSU to its biggest lead with a free throw, 47-32.

Oregon State: With their historic sweep, the Beavers now have three straight at home and an opportunity to make a move in the standings. With Kelley and an assertive defense, OSU has its best chance in the Tinkle era to get a top seed in the conference tournament. "We have a maturity and a toughness and a buy-in that we haven't had in the past. This group is united with one goal in mind — winning," Coach Tinkle said.

Utah: The Utes were plagued with double-digit turnovers in the first half. When they stopped giving the ball away and started making shots, they were tough to stop. This team's spirit rides on seeing the ball go in the hoop so when they aren't even getting shots off, they stumble. However, the emergence of Allen and his leadership bodes well for the future.

"It feels amazing to be listed above all the famous names of Oregon State shot blockers," said Kelley, a seven-foot junior from Gervais, Ore.

Kelley took an unconventional path to Division I basketball with stops at Division II Northwest Christian and Lane Community College but he's made his mark quickly with the Beavers.

Kelley had his fewest blocks of the year — just one — over his last couple of games and admitted to being "out of sorts, mentally and physically." But against Utah, "I was determined to protect the rim and be there when my teammates needed me."

Tres Tinkle, "It makes a world of difference having Kylor back there."