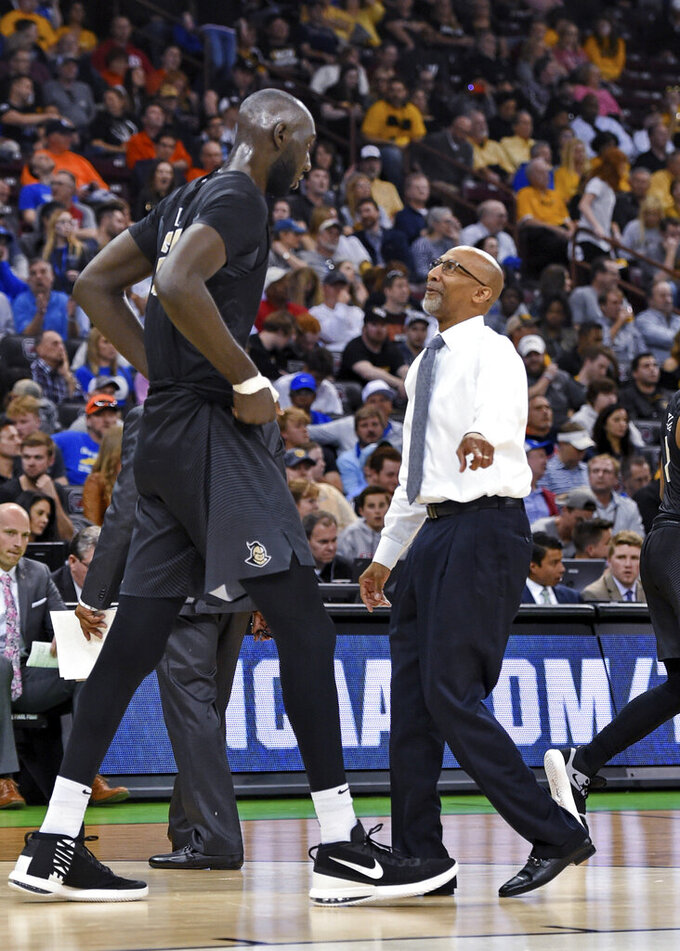 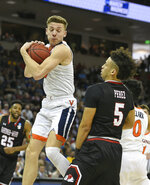 Standing in Johnny Dawkins' way is his former coach and boss.

Dawkins, a former Naismith player of the year and assistant coach at Duke, will match up with Krzyzewski on Sunday as No. 9 seed UCF attempts to upset No. 1 seed Duke in an East Region matchup at Columbia, South Carolina.

It's the type of scenario Dawkins would rather avoid, even though he's been through this situation before. Dawkins faced Krzyzewski before during his tenure as Stanford's head coach.

"No one looks forward to that type of situation," Dawkins said. "It's something that happens because we're in the tournament and it means we've done well because we're all moving forward, but it's not something you look forward to."

Duke is one of three No. 1 seeds from the Atlantic Coast Conference playing a second-round game Sunday. North Carolina faces No. 9 seed Washington in a Midwest Region game at Columbus, Ohio, and Virginia meets No. 9 seed Oklahoma in a South Region matchup at Columbia.

"What a collection of great guys who really understood the game," Krzyzewski said.

Dawkins later worked as an assistant on Krzyzewski's staff from 1998-2008. He's in his third season at UCF and led the Knights to their first NCAA Tournament victory Friday when they defeated VCU 73-58.

"I think my team will come out with a sense of maturity," Dawkins said. "I think they'll come out with a focus. And that's where they've been all year. They've come out, and they've competed against everyone we've played against, and that's, I think, largely because of the leadership. Our senior leaders, guys that have been around. They've demanded that from all of our players."

Here are some other plotlines heading into Sunday's games:

North Carolina and Virginia both trailed at halftime Friday before rallying to beat No. 16 seeds in the first round.

Both realize they need to get off to faster starts Sunday.

"We can't have that letdown tomorrow," North Carolina forward Luke Maye said Saturday. "We've just got to do our best to make sure we come out the right way and got to punch them in the mouth early."

Virginia should feel a little more confident now that it's advanced beyond the first round. Virginia became the first No. 1 seed ever to lose to a No. 16 seed last year when it fell to Maryland-Baltimore County.

"I think how we won (Friday) is a huge testament of our growth from last year," Virginia guard Kyle Guy said. "Last year, we were in the same situation, and we panicked as an entire program, and this year we didn't, and we took care of business and got the job done.

"Yeah, we can breathe a little bit easier now, but at the same time, it's the NCAA Tournament, so like you said, we're not relaxed. We're not content by any means. We still have our foot on the gas and just trying to go as far as we can," he said.

Duke also started slowly and led just 31-27 at halftime before rolling to an 85-62 victory over North Dakota State.

Virginia Tech and Liberty are located less than 100 miles from each other but have traveled all the way across the country to San Jose, California, to face off with an East Region semifinal berth at stake. The 13th-seeded Flames earned this date with No. 4 seed Virginia Tech by upsetting Mississippi State 80-76 for their first NCAA Tournament victory.

These two teams should know each other pretty well. Virginia Tech beat Liberty 86-70 in a preseason exhibition that raised over $36,000 for hurricane victims.

WATCH OUT FOR 3s

Tennessee has allowed 15 3-point baskets in each of its last two games, which represents a major concern heading into its matchup with Iowa. The Hawkeyes shot 11 of 22 from 3-point range in a 79-72 first-round victory over Cincinnati.

"It's not that we're not trying to defend the 3-point line," Tennessee coach Rick Barnes said. "You've got to give (the opponents) credit. They're making the shots. It's not like they're layups, either. They're making shots from very deep range, and that's part of the game. And that 3-point line is a great equalizer in some ways."

In a matchup of double-digit seeds, No. 13 seed UC Irvine puts its 17-game winning streak at stake and seeks its first Sweet 16 berth as it faces No. 12 seed Oregon in a South Region second-round game. ... Buffalo's high-flying offense matches up with Texas Tech's stingy defense. Buffalo is scoring 85.1 points per game while Texas Tech allows only 59.2 points per game. ... Houston faces Ohio State and attempts to reach the Sweet 16 for the first time since losing to Georgetown in the 1984 championship game. Houston lost a second-round game last year 64-63 to eventual runner-up Michigan on a Jordan Poole 3-pointer at the buzzer.