Utah counting on experience as springboard this season 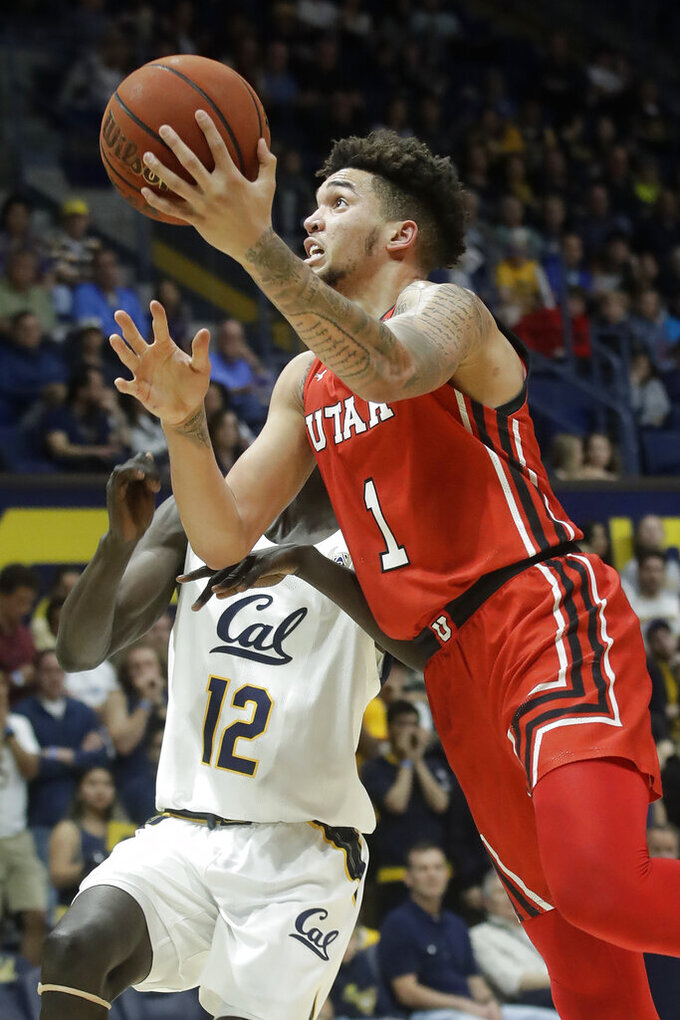 SALT LAKE CITY (AP) — Experience is turning into an area of strength for Utah.

The Utes had one of the youngest rosters in Division I last season and suffered some major growing pains along the way.

It's a different story this season. Four starters return from a year ago – led by second-team All-Pac-12 selection Timmy Allen. Eight players in coach Larry Krystkowiak’s nine-man rotation from the 2019-20 season are back on the roster.

It has Utah feeling confident about taking a leap forward from last season’s eighth place finish in the Pac-12 after posting the program’s fewest wins in a season since 2013.

“It does more than a lot of people think,” Allen said. “We’re way further ahead than we were last year at this point as far as chemistry, being able to make plays, and reading the game.”

The Utes added a pair of highly regarded freshmen and a junior college transfer to their backcourt to complement Rylan Jones and Alfonso Plummer. Freshmen Ian Martinez and Pelle Larsson are skilled ballhandlers who can share point guard duties with Jones as needed. Jordan Kellier, a transfer from Williston State, will add to Plummer’s scoring punch on the wing.

All three players hail from outside the United States. Martinez comes to Utah from Costa Rica. Kellier is from Jamaica. Larsson is from Sweden. Going global is not a new development for the Utes, who also return players Finland and Senegal.

“Our game has become a lot more global, probably a 360 from years ago when there wasn’t a lot of value for international players,” Krystkowiak said. “The world is certainly catching up to the US.”

Utah heads into a new season with greater depth on the wing and experience up and down the roster. Krystkowiak's primary concerns now are getting his players to work hard, communicate well, and cut down on the turnovers and poor shooting that plagued the Utes last season.

“We’re always going to expect them to take on that part of our DNA,” Krystkowiak said.

Allen shouldered the load on offense and on the glass throughout his sophomore season. He led the team in scoring (17.3 points per game) and rebounding (7.3). When he was hot, Utah was almost unstoppable. When Allen went cold, the Utes struggled to do anything productive on offense.

Allen registered six double-doubles a year ago and it could be a more frequent occurrence if offseason work on his jump shot pays off. The junior forward also aims to be a better facilitator entering his third season with the Utes.

“I’m a more willing creator than I was last year,” Allen said. “I like getting my teammates shots and I enjoy setting people up.”

Jones endured a rash of injuries during his freshman season while sacrificing his body to draw charges. He ended up missing three games with a rib injury, a sprained ankle, and a concussion.

During the offseason, the sophomore guard added more muscle to help him become more durable. He is also embracing a more cautious approach to how he defends.

“Last year, I got bumps and bruises almost every game,” Jones said. “Ribs. Ankle. Concussion. So I just gotta be a little smarter and maybe not take a charge one minute into the game.”

Plummer emerged late last season as a true perimeter scoring threat. He broke team, Pac-12 tournament and conference single-game records for 3-pointers when he drained 11 outside shots against Oregon State in the first round of the conference tournament last spring. The senior averaged 26.3 points while shooting 60% (21-of-35) from beyond the arc over the final three games of his junior campaign.

“I feel like the coaches have more belief in my game,” Plummer said. “They gave me a chance to help the team to win.”

With the Pac-12 debuting a 20-game conference schedule during the pandemic, Utah will open league play at home against Washington on Dec. 3.

Ironing out the nonconference schedule is an ongoing chore. Utah has home contests against Idaho State and Utah Valley scheduled for December. No other game has been finalized.

Utah pulled out of the Crossover Classic in South Dakota earlier this month. The Utes were originally scheduled to open their season against Creighton in a first-round game on Nov. 25.