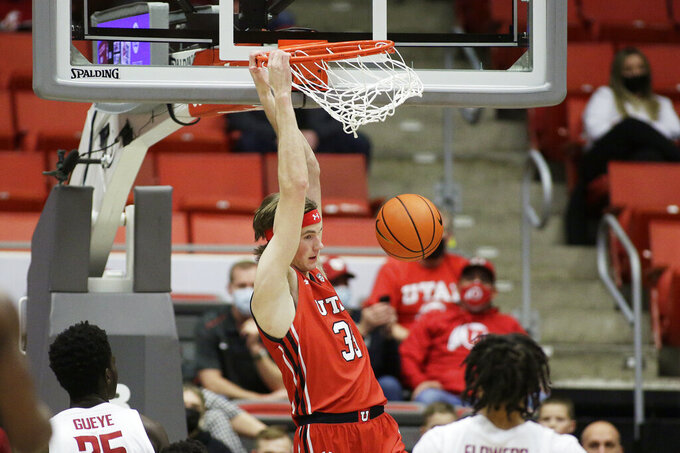 SALT LAKE CITY (AP) — Utah is determined to get tougher this season.

The Utes put extra emphasis on physicality in preparing for the upcoming season after a series of close losses led to an 11th-place finish in the Pac-12 a year ago.

Seven of Utah’s 16 losses in league play were by six points or fewer so they were only a few plays away from finishing above .500 during Craig Smith’s first season at the helm. Falling short in that manner is a feeling none of the returning players want to experience again.

“This team has the mindset that we’re just going to be physical this year,” senior center Branden Carlson said. “We’re not going to get pushed around.”

Carlson will be an important cornerstone for the Utes this season. The 7-footer led Utah on both ends of the court during his junior campaign, averaging a team-high 13.4 points and 6.1 rebounds. When he missed eight games while recovering from an appendectomy and because of COVID-19 health and safety protocols, Utah’s offense lacked a go-to scorer around the basket.

Experience will be an asset aiding the Utes’ efforts to climb the Pac-12 ladder. Besides Carlson, Utah returns three other full-time starters in Rollie Worster, Marco Anthony, and Lazar Stefanovic. Worster led the team in assists (3.2 per game) and Anthony was the top rebounder (7.2 per game) last season. Gabe Madsen, the team’s top outside shooter (.405), is also back.

Their familiarity with the playbook means the Utes are already ahead of schedule in their offseason development.

“Our guys are smart,” Smith said. “Not only smart from just a pure intelligence standpoint, but they’re basketball smart. These guys pick up on things pretty quickly and so when we’re installing new things it doesn’t take them too long to figure those sorts of things out."

Smith made a significant addition to his staff by bringing in Chris Burgess to replace Eric Peterson, who left to become the head coach at South Dakota. Burgess joined Utah after spending the last three seasons at BYU as an assistant to Mark Pope. He also worked as an assistant under Pope at Utah Valley from 2015 to 2019.

Burgess built a reputation for player development at BYU. The frontcourt players he’s working with now credit him with helping them hone their natural skills.

“I feel like he’s really helped my game develop a ton since he’s been here.” Carlson said.

Joining the Utes marks a homecoming for Burgess. He played for Utah from 2000 to 2002 under Rick Majerus after spending two seasons at Duke from 1997 to 1999.

Utah added a trio of high-profile transfers to shore up their depth.

Mike Saunders Jr. joined the Utes after spending two seasons in Cincinnati. Gavin Baxter followed Burgess from BYU as a graduate transfer. Ben Carlson came over from Wisconsin after appearing in 30 games for the Badgers last season.

Saunders has the potential to make the biggest immediate impact among the transfers. The 6-foot guard showed glimpses of his potential at Cincinnati last season while averaging 7.3 points, 2.7 assists, and 2.0 rebounds per game with the Bearcats.

This is not the Indiana native’s first basketball stint in Utah. Saunders previously spent two seasons playing for Wasatch Academy HS in Mount Pleasant, Utah, before he signed with the Bearcats.

“It was a great time for me basketball-wise,” Saunders said. “I miss those times. I’m happy to be back though. It’s a good feeling to be back in Utah.”

Only three freshmen signed with Utah in its 2022 class. All three players come from outside the United States. Luka Tarlac is from Belgrade, Serbia -- joining Stefanovic as the second Serbian player on the roster. Keba Keita hails from Mali. Wilguens Exacte is from Quebec, Canada.

Utah opens its season on Nov. 7 hosting Long Island. The Utes play only one true nonconference road game when they visit BYU in mid-December. Utah will also participate in the Fort Myers Tipoff on Nov. 21 and 23 as part of a four-team field including Georgia Tech, Mississippi State and Marquette.