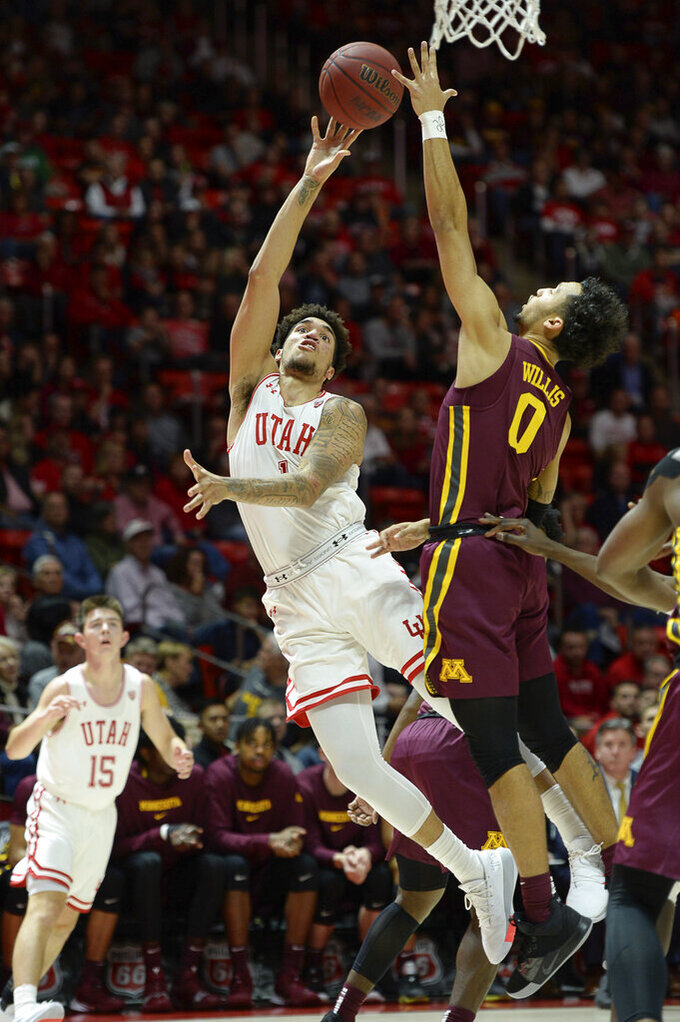 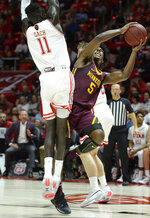 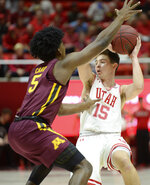 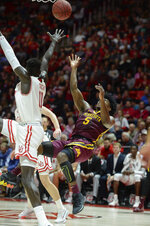 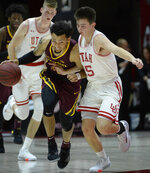 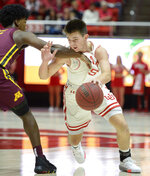 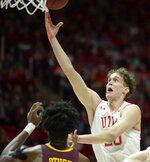 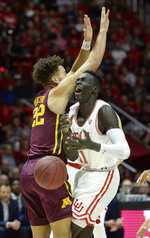 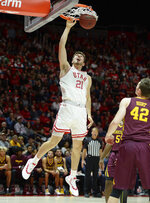 SALT LAKE CITY (AP) — Inexperience is not robbing Utah's poise late in games. Only a few games into the season, the youthful Utes are closing out games with the poise of a veteran-laden squad.

Utah weathered multiple rallies by Minnesota throughout the second half of its 73-69 victory over the Golden Gophers on Friday night. The Utes saw double-digit leads cut to a single point on two different occasions. They never succumbed to the pressure.

Each time it got close, Utah made a basket or got a stop at a critical juncture to keep Minnesota at arm's length. The Utes (3-0) led from wire-to-wire while shooting 53 percent from the floor and holding the Golden Gophers to 35 percent shooting.

Sophomore guard Both Gach likened closing out the game to finishing a meal.

"Leave nothing on the plate,” he said. “We aren't full. We're always hungry. We're always trying to eat, so we got to finish strong."

Timmy Allen and Gach led the way in making big plays down the stretch. They scored 19 points apiece to lead Utah and Allen added 10 rebounds.

Riley Battin added 13 points and eight rebounds while Rylan Jones chipped in 10 points and six assists for the Utes.

“Guys just need to stay with it.” Oturu said. “It’s a long season and we have something like 27 more opportunities to go. … It hurts to lose, but it’s just the fourth game of the season.”

Minnesota and Utah started the game on opposite ends of the offensive spectrum.

The Golden Gophers missed six straight shots and went nearly four minutes without a field goal before Oturu ended the drought with a pair of 3-pointers and a jumper over three straight possessions.

The Utes, on the other hand, barely missed anything in the game's early minutes. Utah opened the first half by scoring 16 unanswered points and raced out to a 19-3 lead at the 15:44 mark.

Gach fueled Utah's early run by sinking a pair of free throws, drilling a 3-pointer, and scoring a layup over three consecutive possessions. Overall, Utah started 7-of-8 shooting from the field and scored on eight of its first nine possessions.

“We were ready to go from the jump,” Allen said. “That was something we wanted to focus in and do. We want to be the actor and not the reactor as Coach (Larry Krystkowiak) puts it. So we just came out hot and tried to carry that as long as we could."

Minnesota struggled to climb out of that early hole. The Golden Gophers trailed the Utes by double digits through much of the first half until back-to-back baskets from Kalscheur and Carr cut Utah's lead to 39-33 going into halftime.

Sloppiness on offense from Utah opened the door for Minnesota to chip away even more at the deficit. The Golden Gophers twice rallied to within a point, the second time after Tre Williams and Kalscheur made back-to-back 3-pointers to spark a 9-0 run that cut Utah's lead to 50-49.

Minnesota never found a way to take the lead. The Utes finally pulled away when Battin and Jones each hit a pair of free throws sandwiched around a dunk from Allen to give Utah a 67-59 lead with 1:36 remaining.

The Golden Gophers could draw no closer than two points the rest of the way.

“We learned that we’re close, but the name of the game is winning,” Gophers coach Richard Pitino said. “We’re not panicking. There’s so much we can clean up.”

Utah coach Larry Krystkowiak earned his 200th career victory as a NCAA Division I head coach. He is 200-130 overall in his 11th season and ninth with the Utes. Before coming to Salt Lake City, Krystkowiak coached at Montana for two seasons from 2004 to 2006. He became Utah's 15th head coach in 2011.

Minnesota finished with a 17-5 advantage in offensive rebounds even though Utah earned a 41-39 overall edge in the rebound battle. The Golden Gophers made those additional opportunities count. They outscored the Utes 18-9 in second-chance points.

"That's been an Achilles heel and from a coaching perspective that's something we're going to have to get after,” Krystkowiak said. “They really punched us in the mouth when it came to the offensive glass. They ended up with a lot of points off those opportunities."

Minnesota: The Golden Gophers were a one-man team through much of the first half. Oturu scored 16 points on 6-of-8 shooting in the first 20 minutes. When Utah clamped down on Oturu in the second half, Minnesota struggled to get enough offense elsewhere.

Utah: Youth and inexperience bubbled to the surface at inopportune times for the Utes. Utah committed 16 turnovers – including five over five straight possessions in the second half – to open the door for Minnesota to make it a close game.

Utah faces Coastal Carolina in the first round of the Myrtle Beach Invitational on Thursday.