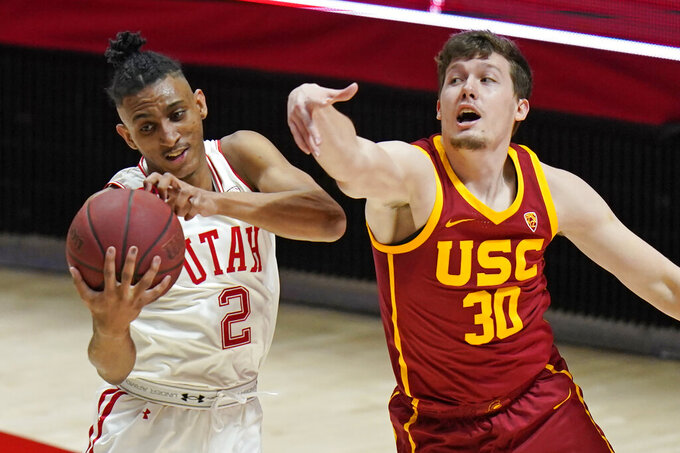 SALT LAKE CITY (AP) — Alphonso Plummer scored 19 points, Timmy Allen added 15 points and eight assists and Utah pulled away late in the second half to beat No. 19 USC 71-61 on Saturday.

“The best part of my game is I’m not just a scorer,” Allen said. “My mindset was just to come out and make plays, regardless of that being me scoring or getting a teammate a shot.”

Ian Martinez scored 10 points off the bench for Utah. The Utes shot 48% from the field and had 19 assists on 27 baskets.

Drew Peterson scored 19 points, and Evan Mobley added 11 points and eight rebounds for suddenly struggling USC (19-6, 13-5), which shot 37% from the field and lost for the third time in four games.

“Our second half of basketball was our worst half of probably all season,” Trojans coach Andy Enfield said. “The starting five played very poorly on both sides of the ball in the second half.

Utah hit 12 of its first 15 shots after halftime and built a 13-point lead, going up 50-37 on a jumper from Allen. The junior forward made five baskets and assisted on four others in that stretch.

USC cut the deficit to 55-50 on a three-point play from Peterson. But that’s as close as the Trojans got. Plummer scored four baskets over a four-minute stretch – including three 3-pointers – to extend Utah’s lead to 69-56 with 2:01 remaining.

“For us, the ball has got to pop,” Utes coach Larry Krystkowiak said. “We don’t have a great isolation team. Some teams can get by with that. We’re in the top three in our league at assisted baskets even though we haven’t made a lot of the looks that we’ve (had). And I think we can get better.”

Sloppy basketball defined the first half as the Trojans and Utes combined for 19 turnovers before halftime.

USC set a defensive tone by pressuring Utah into several early turnovers, opening the door for the Trojans to take an early 18-8 lead. Peterson and Isaiah White scored three baskets apiece to fuel the 18-4 run that gave USC that double-digit cushion. Two of White’s baskets came off turnovers.

The Utes answered with a 10-2 run and cut USC’s lead to 22-20 on back-to-back 3-pointers by Plummer. Utah limited the Trojans to just four baskets over the final 11 minutes of the first half to keep within striking distance.

Allen scored back-to-back baskets on the back end of an 8-0 run to finally give the Utes a 35-29 lead early in the second half.

Once Utah got cooking, USC could not keep up.

“If you look at our numbers from a shooting percentage, turnovers, it was really our worst performance probably in the entire season,” Enfield said.

USC: An inability to attack from the perimeter hurt the Trojans. USC went 0 for 6 from long distance before halftime. The Trojans missed their first 10 shots from the perimeter overall before Peterson knocked down the team’s first outside basket with 12:21 remaining. They finished 2-of-13 from 3-point range.

Utah: The Utes came to life on offense in the second half without starting point guard Rylan Jones on the floor. Jones exited late in the first half when he suffered an apparent shoulder injury after diving for a loose ball. He spent the second half on the bench with his right arm in a sling.

Mikael Jantunen returned to the starting lineup for Utah after missing four games while playing with Finland in the 2022 EuroBasket Qualifier. The Utes lost four straight in his absence. Jantunen finished with six points and seven rebounds against USC and his defensive play helped shut the Trojan offense down during critical stretches.

“He’s a battler,” Krystkowiak said. “He’s kind of a glue guy for our team. Does a lot of the intangibles and little things. Just having his minutes back on the court enhances our team without a doubt.”