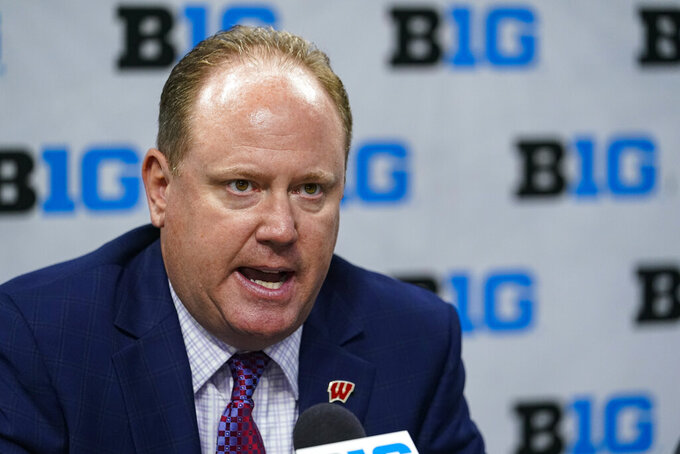 MADISON, Wis. (AP) — Wisconsin heads into the upcoming season with a substantially different roster after nearly all of last year’s seniors opted against returning.

The Badgers’ roster features seven sophomores and five freshmen, which marks the program’s largest collection of underclassmen in at least 20 years.

“You’re constantly teaching,” Wisconsin coach Greg Gard said Monday during the basketball program’s media day event. “I think that’ the exciting part of it, that there’s so many unknowns.”

All things considered, perhaps a fresh start was best.

Wisconsin went 18-13 and reached the second round of the NCAA Tournament last season before losing to eventual national champion Baylor, but that represented a step back for a team that entered the year ranked seventh after winning a share of the 2020 Big Ten regular-season title.

Although the NCAA gave seniors the options to return for one more year of eligibility because of the pandemic, guard Brad Davison was the only one of Wisconsin’s seven 2020-21 seniors who opted to return.

The issues that some Wisconsin seniors had with Gard last season were exposed when when secretly-recorded portions of a Feb. 19 team meeting were sent to the media during the summer.

That recording had Nate Reuvers, a forward on last year’s team, telling Gard that “we don’t have a relationship” and that “I personally don’t think or feel like you care about our future aspirations.” Other players issued similar comments.

The Wisconsin State Journal, which first reported the details of that meeting, said the 37-minute recording came from an anonymous email account and that it didn't include the entire meeting.

“It brought back all sorts of different emotions that you had,” Davison said in regard to the release of the recording. “But at the end of the day, I’m just super thankful for the group we have right now and for my opportunity to play here in my fifth year with this group of guys for this coaching staff. I wouldn’t want to be anywhere else. I’m thankful to be here.”

Davison, guard Johnny Davis and forward Tyler Wahl are the only Badgers who played as many as 10 minutes per game last season. The roster has eight newcomers, including three transfers: Isaac Lindsey (formerly at UNLV), Jahcobi Neath (Wake Forest) and Chris Vogt (Cincinnati).

For his part, Gard says he has made some changes to his approach but noted that’s nothing out of the ordinary. He considers it part of his natural growth process as a coach.

“You’re always changing,” Gard said. “I think I’ve looked at that every year, every day, to be honest with you. How can I improve and get better and help our young men? I think also coming out of COVID, everything that is new, that is different is viewed as a drastic change when maybe it was in the planning stages anyway and COVID kind of put the brakes on it. I think you’re always looking to improve and looking to change for the better, whether it’s schematically, whether it’s in your program.”

Davison noted there are more chances for team bonding activities this season that can help the Badgers develop chemistry. Those opportunities were missing last season due to pandemic-related restrictions.

“I think we’re really just back to normal with the opportunity that we have to all be together, to interact outside the basketball court,” Davison said. “Last year we couldn’t do a whole lot. This year, whether it’s going golfing or going to dinners or hanging out on football gamedays, as a team, as a whole and as a program, we have to a lot more together, which has been really great for all of us.”