Harper injured, but Mathis lifts No. 14 Rutgers over Purdue 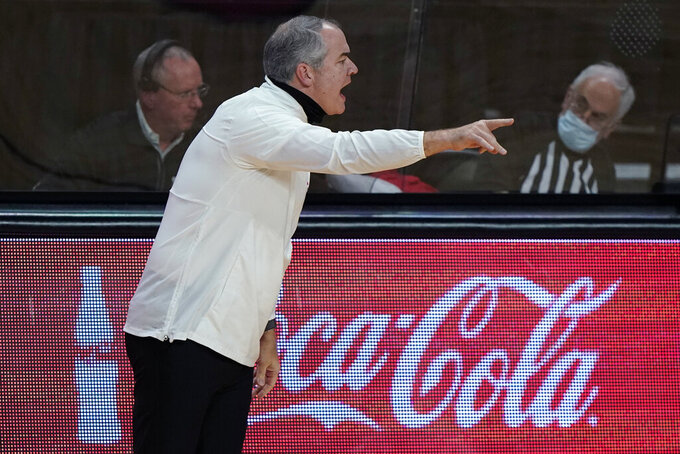 Rutgers coach Steve Pickiell gestures to his players during the first half of the team's NCAA college basketball game against Purdue, Tuesday, Dec. 29, 2020, in Piscataway, N.J. (AP Photo/Kathy Willens)

PISCATAWAY, N.J. (AP) — Rutgers hasn't played with a complete, healthy lineup yet this year, so the 14th-ranked Scarlet Knights knew what to do when leading scorer Ron Harper Jr. was forced to the bench.

This time, that man was Montez Mathis.

Mathis scored a career-high 25 points, including 16 in the second half, and Rutgers beat Purdue 81-76 on Tuesday night.

Harper tweaked his ankle in practice and was scratched an hour before tipoff. The Honorable Mention All-Big Ten player from a year ago has been among the top players in the conference and small forwards in the nation, shooting 56.4%, including 50% from beyond the arc, for 23.4 points per game along with 7.1 rebounds and 2.1 assists.

Harper’s injury is the latest in a season of them for Rutgers (7-1, 3-1 Big Ten). Jacob Young returned after a hard fall that sidelined him in the second half of the last game vs. No. 23 Ohio State, and Mawot Mag (ankle) had missed the last three games. Cliff Omoruyi was sidelined for the second straight game with a sprained right knee.

Baker — an All-Big Ten guard — missed three games after spraining his ankle early in the season-opener. Baker had 19 points, six rebounds and four assists, while Young had 13 points and four assists.

Purdue (7-4, 2-2 Big Ten) punished Rutgers in the paint, led by Trevion Williams’ 21 points and 12 rebounds. The Boilermakers had 42 points in the paint to the Scarlet Knights’ 28. Purdue held the rebounding edge 33-31.

“When you play a team like this, you know, Trevion Williams is a really good passer. So if you double down, you get to kind of pick your poison with him a little bit,” Rutgers coach Steve Pikiell said. “And (Zach) Ede is 7-foot-4, I mean, huge. You know, Myles (Johnson) has to wrestle with them. ... Going against two of the better post guys in the league.”

Isaiah Thompson had 17 points for Purdue, and his layup with 15:19 left gave the Boilermakers their first lead, 46-44, since midway through the first half. Pikiell promptly called a timeout to break up Purdue’s 23-6 run.

Rutgers trailed by five before rallying to tie it at 53 on Paul Mulcahy’s 3-pointer and Baker’s transition layup.

The teams exchanged leads before Mulcahy hit a 3-pointer to put Rutgers up 61-59 at the 7:52 mark. The Scarlet Knights led the rest of the way.

“The ones that Mulcahy hits in the second half, nobody’s there," Purdue coach Matt Painter. “You’re just wide open. No one’s rotating to him.”

After Purdue jumped to an 11-6 lead, Rutgers rallied to lead by as many as 15 before taking a 40-34 lead into halftime.

Rutgers had been struggling at the charity stripe, shooting 60%. That improved against Purdue, as Rutgers went 14 of 17 from the line.

Purdue: It’s the beginning of a tough road stretch in the Big Ten for the Boilermakers. They have three games against Top 25 opponents — also at No. 15 Illinois and at No. 17 Michigan State — with a home game vs. Nebraska at home in between.

Rutgers: The Scarlet Knights are in the midst of a difficult stretch, with the Boilermakers the only unranked team during the current six-game stretch. Rutgers hosts No. 10 Iowa before traveling to No. 17 Michigan State and hosting No. 25 Ohio State.

Purdue: At No. 15 Illinois on Saturday.

Rutgers: Host No. 10 Iowa on Saturday.