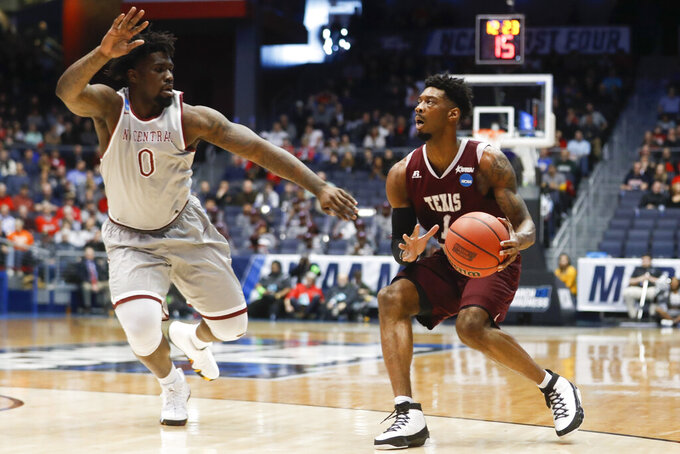 FILE - In this March 14, 2018, file photo, Texas Southern's Donte Clark (1) eyes the basket against North Carolina Central's Larry McKnight Jr. (0) during the first half of a First Four game of the NCAA men's college basketball tournament in Dayton, Ohio. The First Four has become a reward and showcase for Historically Black College and Universities, the group of schools that predate the integration, that usually do not get to play in the national spotlight without being a tasty opening-round appetizer for a No. 1 seed. (AP Photo/John Minchillo, File)

COLUMBUS, Ohio (AP) — Prairie View A&M made the First Four this year as a representative of a league made up of historically black schools, at least one of which has been in the play-in round every year since the NCAA Tournament field was expanded to 68 teams in 2011.

But coach Byron Smith prefers not to view it that way.

Smith, whose Panthers play Fairleigh Dickinson on Tuesday night, sees them more as representing the school, the conference and college basketball rather than being a flag-carrier for the group of schools known as Historically Black College and Universities or HBCUs.

"Obviously I respect it," Smith said. "And we're representing the game and the people that came before us. So it's not something I pay a lot of attention to, but I still respect it, that we're an HBCU."

The First Four has become one of the few national showcases for HBCU's — the group of more than 100 schools, mostly in the South, that predate integration and now reside in the lower tier of Division I basketball.

They get a tournament start that won't end against juggernauts Duke or Gonzaga, although the No. 1 seed usually is next if they can make it out of Dayton.

"It gives you a chance to win a tournament game," said Mike Davis, who coached Texas Southern to a win over North Carolina Central in the First Four last season before taking over at Detroit Mercy.

That game pitted HBCUs against each other for the first time in the First Four, ensuring one of them would advance. Texas Southern got the first tournament win in school history, beating North Carolina Central 64-46 in what was called the "national championship" of HBCU teams.

Texas Southern then was walloped by No. 1 seed Xavier by 19 points.

Prairie View (22-12), a school of about 8,000 students northwest of Houston, won the Southwest Athletic Conference tournament to get the automatic bid and a trip to Dayton. The Panthers face New Jersey's Fairleigh Dickinson (20-13) for the right to play No. 1 Gonzaga in a West Region opener on Thursday.

On Wednesday, N.C. Central, winner of the Mid-Eastern Athletic Conference tournament title, is back in Dayton for the third straight year, facing North Dakota State. The winner will move on to play Duke, the No. 1 seed in the East Region.

If history is any indication, there probably aren't any bracket-busters here.

The NCAA expanded the field to 65 in 2001 with a single play-in game then went to the current format in 2011. Every year except 2001 an HBCU team from the SWAC or MEAC has had a participant in play-in games. They've won just five times in 17 games, all of those teams going on to lose in the first game of the round of 64. Teams from those conferences have advanced to the second round of 32 just four times over the years.

"It's important for our culture most of all," Panthers guard Antoine Lister said, "to go out and represent in a positive manner."