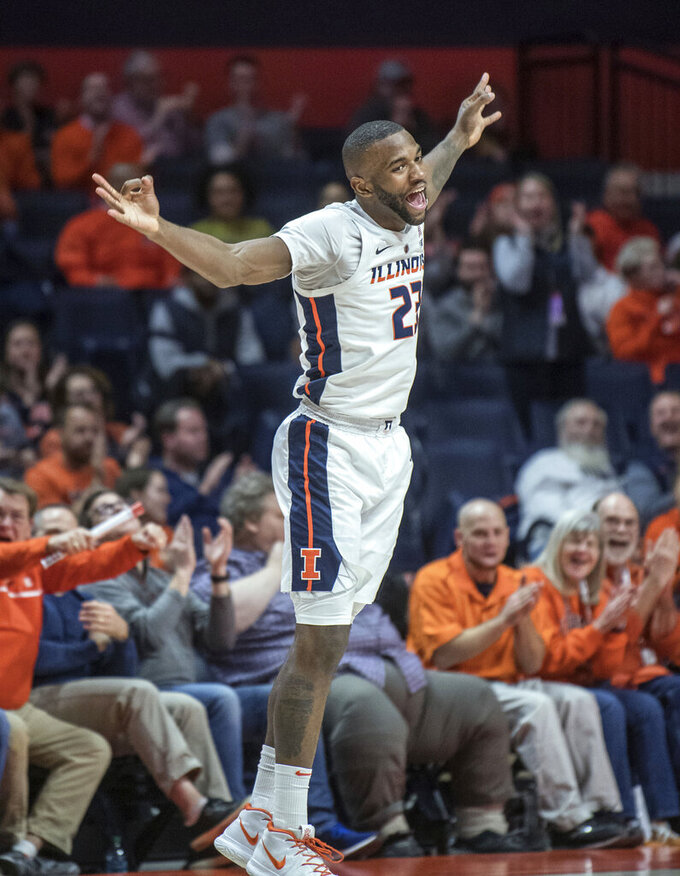 Illinois guard Aaron Jordan dances back to play defense after making a 3-point shot during the second half of the team's NCAA college basketball game against Minnesota in Champaign, Ill., Wednesday, Jan. 16, 2019. (AP Photo/Rick Danzl) 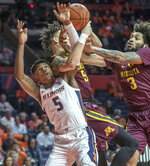 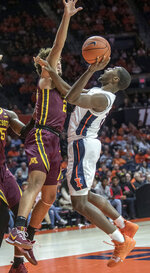 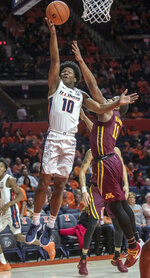 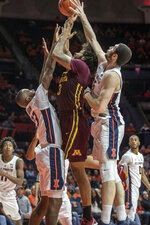 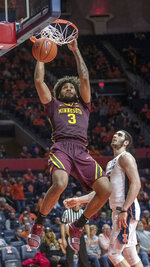 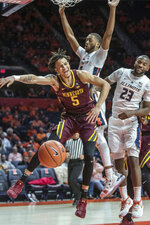 "Ayo's got a birthday tomorrow," the 6-foot-9 freshman said, placing an arm around fellow freshman Ayo Dosunmu. "This was the birthday gift for him."

It was a much-needed present not only for Dosunmu, but for the Illini as a whole.

Dosunmu produced 23 points and Bezhanishvili added 20 points as Illinois used one of its best first halves this season to defeat the Golden Gophers 95-68 and end a five-game skid.

The Illini (5-12, 1-5 Big Ten) piled up 51 points in the opening 20 minutes — their second-best output thus far — on the back of hot shooting and a strong glass presence.

"We were in every game we played in conference so far," Dosunmu said. "So it was great to finally get that monkey off your back."

The Golden Gophers (13-4, 3-3) hadn't permitted more than 44 points in a first period when they arrived at State Farm Center. They led for just 28 seconds versus Illinois.

"It was a night that a lot of things started to click," second-year Illinois coach Brad Underwood said. "I couldn't be happier for our locker room."

The Illini's second-leading scorer as a freshman, Dosunmu potted 15 points before halftime.

Fellow freshman Bezhanishvili tallied 14 points and five boards prior to reaching the locker room. Both marks exceeded his full-game averages.

Backing the college newcomers were Trent Frazier with 15 points and Andres Feliz with 10 points as Illinois shot 56.1 percent from the field.

Minnesota, which lost for the second time in its last three bouts, received 17 points from Daniel Oturu and 11 points from Jordan Murphy.

"Credit to (the Illini): They were really good, and we were really bad," Gophers coach Richard Pitino said. "We took a major step backward today."

Minnesota: The Gophers suffered their worst setback since falling by 30 points against Michigan State on Feb. 13, 2018 and continued to struggle away from home, slipping to 1-3 as true visitors.

Illinois: Under second-year coach Brad Underwood, Illinois earned its first conference victory since Feb. 25, 2018, and won for the first time since Dec. 15 versus East Tennessee State.

The Gophers possessed a plus-5.7 rebounding margin entering the evening, but Illinois recorded a 39-26 edge in that department.

"We just tried to outrebound them," Bezhanishvili said. "That was our goal. We accomplished that, and that was great."

Minnesota's junior guard managed just nine points on 2-of-13 shooting. Not only was Coffey the Gophers' top scorer at 16.4 points per contest, he also paced the Big Ten in that category entering Wednesday.

"For some reason, when we've been bad, we've been really bad," Pitino said. "If you're not physically competing every single possession, you're going to get beat, and it was a good lesson for us."

Minnesota hosts Penn State on Saturday night. The Gophers head back to Williams Arena in Minneapolis, where they are 8-1 on the year.

Illinois faces No. 23 Iowa on Sunday. The Illini seek their first Big Ten win streak since January 2018 when they head to Iowa City for a matinee versus the Hawkeyes, who edged out Penn State on Wednesday.