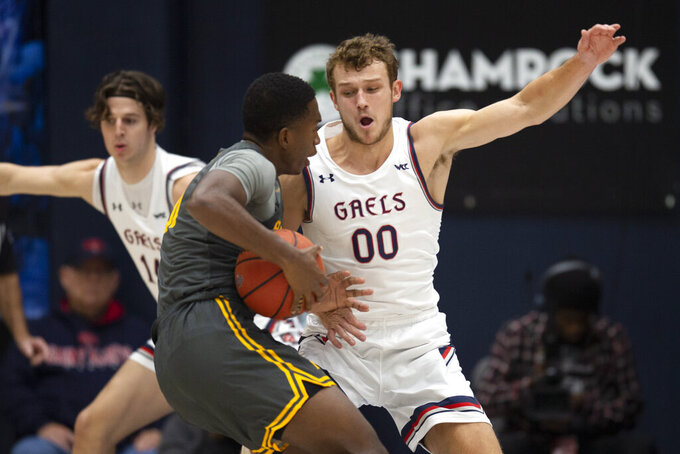 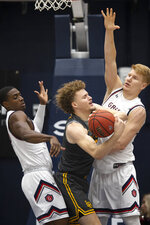 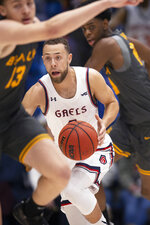 MORAGA, Calif. (AP) — Saint Mary's repeatedly went at Long Beach State in the post to build an early lead. Then, the Gaels changed up and went outside to pull away in the second half.

Tommy Kuhse had a career-high 20 points and eight assists and No. 18 Saint Mary’s bounced back three days after losing its home opener and beat Long Beach State 81-63 on Thursday night.

Matthias Tass added 22 points and five rebounds for the Gaels, who never trailed in the first matchup between the teams since 2010.

“We just played as a team,” Tass said. “We moved the ball around. We had like five or six assists in the previous game so we just tried to share the ball. We know that we have a lot of weapons out there. Especially when they played zone against us, we can move the ball and everyone shot the ball well tonight. I got my layups, Tommy got his 3s.”

Colin Slater had 14 points for Long Beach State (1-3). The Beach have lost 25 consecutive games against ranked teams, dating to 2011.

Saint Mary’s (2-1) shook off a sluggish start and led by 22 after Kuhse’s third 3-pointer of the second half. Kuhse, who had not scored in the Gaels first two games, was 4 of 4 from beyond the arc.

The blowout comes after coach Randy Bennett’s team won its first two games by two points, including a 61-59 loss to Winthrop on Monday.

“We took a step in the right direction,” Bennett said. “I’ve said all along I think we can be good but we’re not that good yet. But we took some steps there tonight. This was a really good win for us. We played really well.”

Saint Mary’s trailed early and didn’t lead until back-to-back 3s from Malik Fitts and Jordan Ford midway through the first half. Kuhse helped settle the offense with seven assists before the break, and Tass had three dunks, including one with defenders on both sides as he went up.

The Gaels stayed sharp in the second half. Kuhse made a pair of 3s to put Saint Mary’s ahead by 20, and Ford scored on consecutive trips down the floor to make it 72-48.

“It’s just a matter of trusting each other and getting that culture re-established as to getting the ball moving and helping each other score,” Kuhse said. “Because when we do that we’re really tough to guard.”

Long Beach State: The Beach have yet to figure out who their go-to scorer will be this season. That’s both a blessing and a curse. The upside is that Long Beach State is getting points from a wide range of players. The downside is that there is no one to get the offense going, especially when the rest of the team is struggling to score.

St. Mary’s: The Gaels looked like they were still feeling the effects of the loss to Winthrop early, but settled down and eventually pulled away. Tass provided a big lift early, but it was Kuhse who set the tone with his passing and perimeter shooting. Another encouraging sign were the 18 assists that Saint Mary’s dished out.

Beating Long Beach State after losing to Winthrop won’t change the mind of many voters, so Saint Mary’s will definitely fall in the rankings. It’s just a matter of how far.

Ford went into the game leading Saint Mary’s with 24 points a game, but took a back seat in the offense against Long Beach State. Ford took only six shots and finished with 10 points.

The Gaels made 12 3-pointers after going 13 of 35 beyond the arc in the first two games combined. The single-game school record is 19 set against Cal Poly in 2015.

Long Beach State: The Beach will get the weekend off before hosting Fresno Pacific on Nov. 22.

St. Mary’s: Hosts Cal-Poly on Sunday. The Gaels have won six of the last seven games between the two non-conference opponents.