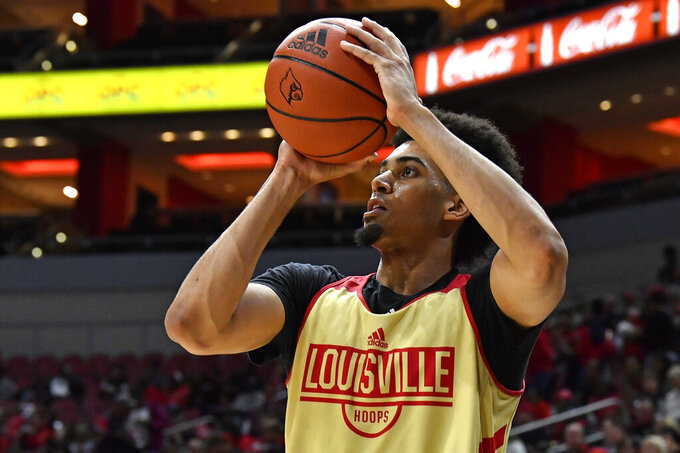 FILE - In this Oct. 12, 2019, file photo, Louisville forward Jordan Nwora warms up before the start of an NCAA college basketball practice in Louisville, Ky. Louisville is back in the national championship conversation after the basketball program was knocked on its heels amid the fallout of embarrassing scandals, including the school’s missteps that were discovered in a federal investigation into college basketball and escorts performing in players’ dorm. (AP Photo/Timothy D. Easley, File) 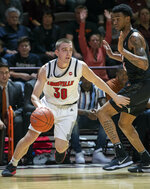 LOUISVILLE, Ky. (AP) — Louisville is back in the national championship conversation after the basketball program was knocked on its heels amid the fallout of embarrassing scandals, including the schools' involvement in a federal investigation into college basketball and escorts performing in the players' dorm.

In just his second year, Chris Mack has the Cardinals opening the season ranked in the Top 25.

"It was just like, imagine that you get knocked down by a boxer and the ref is counting, helping you up," senior guard Ryan McMahon said. "And then right when you stand up, the ref doesn't even say time back in and the other boxer comes in and just punches you again while you're still trying to get your wherewithal.

"We had just kind of recovered from that first scandal and then boom, we got hit with another one. . I'm just I'm glad I stuck it out and stayed around."

It would have been hard to blame McMahon if he hadn't stuck around.

The school had acknowledged it was being investigated in a federal corruption investigation of college basketball. Ten people were initially arrested, including an Adidas executive alleged to have paid the family of former Louisville recruit Brian Bowen to attend school. Bowen never played for the Cardinals and transferred to South Carolina.

That announcement came just months before the NCAA vacated 123 victories and Louisville's 2013 men's basketball title as discipline for a 2015 sex scandal— all of which ultimately resulted in the firing of Hall of Fame coach Rick Pitino.

An escort had alleged in a book that former Cardinals men's basketball staffer Andre McGee hired her and other dancers to strip and have sex with players and recruits in the team dormitory. Pitino denied knowledge of the activities described in the book. He wasn't named in the federal complaint but denied knowing and participating in payments to a recruit's family.

David Padgett did an admirable job holding things together, going 22-14 as interim coach before being replaced by Mack , who blended holdovers with transfers and led the program back to the NCAA Tournament last spring in what was supposed to be a transitional season.

Five teammates have also toughed it out, including leading scorer Jordan Nwora — a preseason Associated Press All-America selection — and Louisville native Dwayne Sutton. Now they lead one of the Cardinals' most experienced rosters in years.

With all the lofty projections of reaching the Final Four, Mack reminds the Cardinals that they haven't done anything yet.

But the former Xavier coach also believes they can meet the high bar.

"I was left with tremendously talented players," said Mack, noting Sutton, McMahon and others were recruited by Pitino. "Those guys are our stalwarts, our warriors, our better players, our most experienced players. I've coached them really hard, and our staff has coached them hard. The type of character they have has allowed them to be coached, maybe by somebody they didn't sign up for.

"Are we satisfied with the preseason ranking? If I were to show that satisfaction to you all (media) about where our program is, I'd think I'd be a little hypocritical to our players."

Mack knows what he has with the veterans, but there's still the challenge of mixing them with 10 newcomers. Even then, Louisville will be shorthanded for a few weeks as 6-foot-11 junior forward Malik Williams (foot) and freshman guard David Johnson (shoulder) recover from offseason injuries.

Not many doubt that Mack will be able to get it done.

"Everybody around knew the job that was meant for Chris Mack was the Louisville job when Pitino left," ACC Network host Jordan Cornette said. "It was a seamless transition, and now you've given him the resources at a place like Louisville.

"He's a hell of a recruiter, he has one hell of a staff and he's a hell of an in-game coach. I'm telling you, this team will have a national championship sooner than later under a guy like Chris Mack."

Louisville's most notable returnees are forward Nwora — who averaged 17 points and 7.6 rebounds per game as a sophomore — and 6-10 Steven Enoch, who both entered the NBA draft pool.

Mack has also been able to sell recruits on Louisville even as another NCAA investigation could be looming in the aftermath of the alleged payments to Bowen's family.

"I've always wanted to play in the NCAA tournament," Williamson said, "so I wanted to make sure when I came here that we were going to be allowed to do that. Coach Mack assured all of us that we wouldn't be affected by that and the university had made the right moves when everything had happened in there.

"I believe in him. That's why I decided to come here."

The scandals will always be a part of Louisville's basketball legacy and Mack has not avoided difficult conversations about the challenges facing the program.

"What Chris has done and what the staff has done is terrific," athletic director Vince Tyra recently said. "Everybody loves to have the great programs do well. And who doesn't love a comeback story?"