WVU's Huggins fined for referring to refs as '3 blind mice' 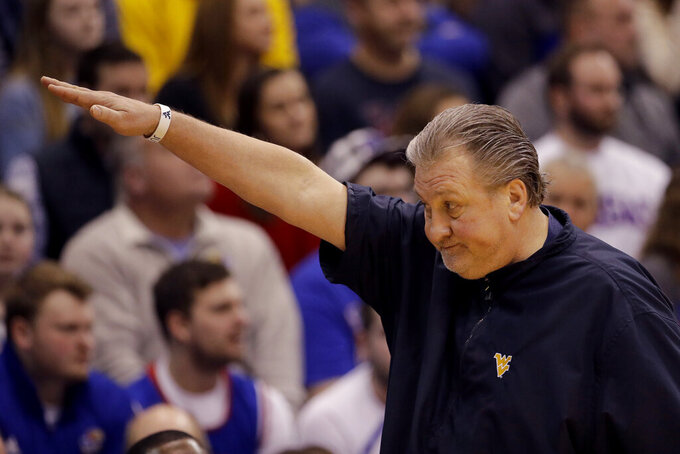 West Virginia head coach Bob Huggins reacts to a call during the first half of an NCAA college basketball game against Kansas, Saturday, Jan. 4, 2020, in Lawrence, Kan. (AP Photo/Charlie Riedel)

MORGANTOWN, W.Va. (AP) — The Big 12 Conference has fined West Virginia coach Bob Huggins $10,000 for referring to an officiating crew as “three blind mice” after a recent loss at No. 3 Kansas.

The league announced the fine in a statement that also issued a public reprimand.

“Coach Huggins’ comments following the West Virginia vs. Kansas basketball game violate the Big 12 Conference’s sportsmanship policy,” Commissioner Bob Bowlsby said in the statement Tuesday. “Because this is Coach Huggins’ third such incident, a public reprimand and a fine of $10,000 is appropriate.”

Huggins made the comments in a postgame radio interview Saturday after the 60-53 loss in Lawrence, Kansas.

“I can’t control what those three blind mice running around out there do,” Huggins said.

Kansas shot 30 free throws, compared with 22 for No. 17 West Virginia. The fouls called on each team were nearly even.

“What we would all love to see is consistency,” Huggins said. “Foul there. Foul here. I understand it’s a hard job, but they do get paid pretty handsomely for it. Just be consistent.”

Bowlsby did not specify the first two incidents.