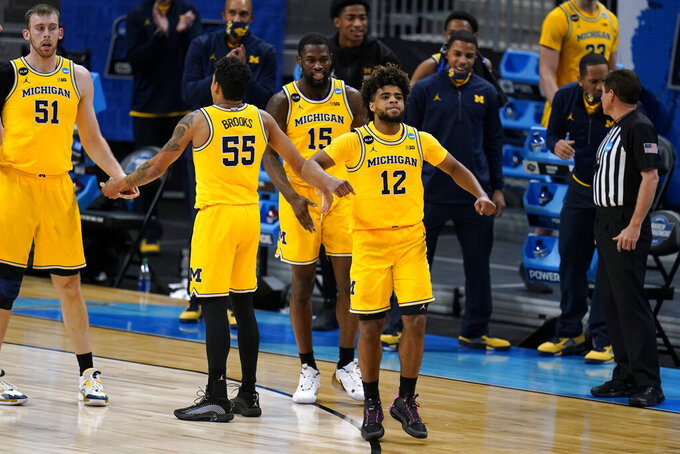 Michigan guard Mike Smith (12) celebrates with teammates during the second half of a Sweet 16 game against Florida State in the NCAA men's college basketball tournament at Bankers Life Fieldhouse, Sunday, March 28, 2021, in Indianapolis. (AP Photo/Jeff Roberson) 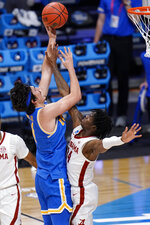 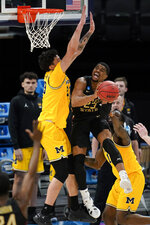 INDIANAPOLIS (AP) — The names UCLA and Michigan can't help but conjure up some of the most memorable images of March.

There's the Wizard of Westwood, John Wooden, slapping his rolled up game program in his hands. The grace of Lew Alcindor and the funky persona of Bill Walton. The blur of Tyus Edney racing up the floor for a buzzer-beating layup to beat Missouri, and eventually leading the Bruins to their 11th national championship.

On the other side, there's Glen Rice leading the upstart Wolverines to their own national championship. The Fab Five in their baggy shorts trying to repeat the feat, only for Chris Webber to call a timeout he didn't have. John Beilein bringing the school back to glory, only to run into a Villanova buzzsaw in the title game.

Now, the Bruins and Wolverines meet for the fifth time in the NCAA Tournament, this time for a spot in the Final Four.

Perhaps there will be some more unforgettable memories made Tuesday night.

“Obviously there's a lot of history behind both teams,” UCLA star Jules Bernard acknowledged on a zoom call Monday, “but at the end of the day, it's two teams on one court, and whoever plays better wins.”

So far that's been UCLA and Michigan — one few expected to be here and one living up to expectations.

The No. 11 seed Bruins backed into the tourney with four straight losses, then trailed Michigan State big in their First Four game. But ever since coach Mick Cronin's fiery halftime speech, the Bruins (21-9) have played with the poise and precision on offense and grit and determination on defense that would have made Wooden proud.

They shut down BYU, blew out Abilene Christian, then beat up-tempo Alabama at its own game in their second overtime victory of the tournament, one that sent UCLA to its first Elite Eight since the 2008 season.

“The buy-in has been great,” said Cronin, who like Michigan counterpart Juwan Howard is in his second year on the job. “It's not about me, it was about them coming together as a group, and having to come through so much adversity. They've stayed confident through everything they've been through.”

The top-seeded Wolverines (23-4) have no reason not to be confident. They've faced the toughest seed they could through each of the first three rounds and dispatched all of them with brutal efficiency.

The coup de grace after pounding Texas Southern and LSU was a dazzling, dominant 76-58 win over Florida State. The Wolverines outscored the Seminoles 50-28 in the paint, needing only three 3-pointers in the entire rout, in a performance that left Florida State coach Leonard Hamilton to say: “They were almost flawless in their execution.”

Can they do that one more time to reach the tournament's final weekend?

“We’ve all played in big games throughout our lives,” Wolverines forward Hunter Dickinson said. “Obviously the NCAA Tournament is an entirely different beast. It's crazy how important this tournament is. It's really win or go home, and there's only one winner at the end of this stuff.”

Much has been made of Michigan losing Isaiah Livers to a stress fracture in his foot before the tournament, but the Bruins know how that feels. They lost Chris Smith, their top returning scorer, to a torn ACL just eight games into the season.

“Our guys band together like brothers,” Howard said. “(Livers) has been amazing on the sidelines as far as with his injury, keeping guys engaged and being another coach out there for us. But it's great to see that other guys have stepped up, and it has been collectively as a group, where guys have stepped up with his absence.”

MORE ON THE HISTORY

The most popular fan left in tournament might be Cronin's dad, Hep. The longtime Ohio high school coach had not seen his son since a game in early 2020 at Pauley Pavilion, just before the pandemic. They were briefly reunited — from a distance — after the Bruins' First Four win at Mackey Arena, and the cheering Hep has been a popular TV shot ever since.

“To have your father here throughout all this," Cronin said, "is just awesome.”

Howard played three seasons for Erik Spoelstra in Miami before spending six seasons on his coaching staff. And while he's just two years younger than the Heat coach, Howard speaks of the 50-year-old Spoelstra as if he's a father figure.

“Coach Spole would probably not like me to say that because he’s very private,” Howard said. “He’s a Hall of Fame coach, understands, knows what it takes to win. Also, what makes him so special is the relationships he develops, not only with his staff but his players, the trust he has in his staff and how he does an amazing job at developing coaches.”

SPEAKING OF THE HEAT

Dwayne Wade and Chris Bosh are among the many friends and former teammates that have been in touch with Howard during the NCAA Tournament, and no doubt would have been in the arena had the pandemic not happened.

“Every person in the Fab Five, including my other teammates at Michigan, they'll all be wearing maize and blue,” Howard said. “LeBron, too. LeBron has reached out and is very supportive. The support is real and I'm very appreciative.”