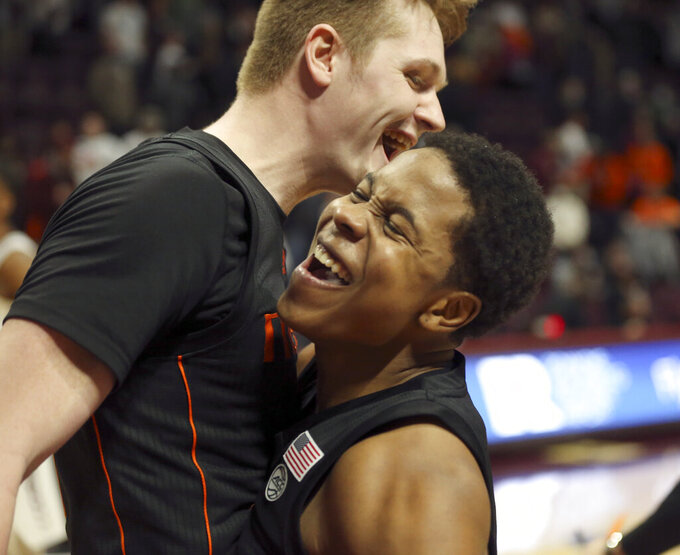 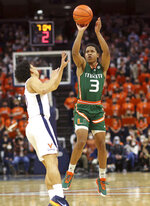 MINNEAPOLIS (AP) — Charlie Moore's roundabout journey across college basketball just felt right during his two seasons at DePaul, returning to his native Chicago to be near his family.

With his father's mobility compromised by a 2015 stroke and his mother needing to work, his parents needed Moore around more than ever. And Curtis Moore attended all of his son's home games in his wheelchair.

“It worked. I feel like it brought a different energy, a different type of spirit to the household and my mom and my dad for those two years that I was there,” said Moore, who started at California, moved to Kansas, then DePaul and is now at Miami. “I feel like things are going much better now. I think my dad’s getting better as well.”

School-switching has never been more prevalent, thanks to the extra year of eligibility granted by the NCAA for the pandemic-limited 2020-21 season and the relaxed transfer rules that allow one-time moves for immediate eligibility instead of an automatic sit-out year.

An Associated Press review of rosters in the six major conferences (the Atlantic Coast Conference, Big East, Big Ten, Big 12, Pac-12 and Southeastern Conference) plus four programs from mid-major leagues that are currently ranked in the AP Top 25 poll (Gonzaga, Houston, Saint Mary's and Murray State) determined 29% of players across those 80 teams have switched four-year schools at least once. That doesn't include junior college transfers.

The Big 12 has the highest portion at 41%. Colorado and Stanford are the only programs without a single incoming transfer. And just five high-major teams didn't add a transfer for this season, Colorado, Connecticut, Purdue, Villanova and Stanford — the latter touting a transfer-free team for the 12th year in a row.

While there's talk about disrupting team chemistry and a lack of resiliency when it comes to the hyperactive transfer portal, there's a personal story behind each switch and it's usually more complex than simply hopping around for more minutes, TV time or wins.

Moore has been a catalyst for the Hurricanes, who’ve been at or near the top of the ACC all season.

“The school, the people around the school, my coaching staff, my teammates, they’ve all just been welcoming and warm and helping people trying to reach their goal. There’s no egos or anything like that. It’s just people trying to win,” Moore said this week in a video interview with the AP. “It’s been a great way to end my college career.”

Payton Willis has come full circle, transferring back to Minnesota last summer after spending two previous seasons there. He's is one of 10 players with Minnesota who have transferred at least once, the most among the high-major programs.

But the sixth-year guard felt like he never truly left.

Willis started at Vanderbilt, where coach Kevin Stallings was fired shortly before he arrived. After two years mostly coming off the bench, he made his first transfer to Minnesota.

“I knew how valuable a Vanderbilt degree is, how prestigious it is. I just felt at home there. But when it was done, it was done,” Willis said in an interview earlier this season, declining to go into more detail.

Willis had flashes of success in the 2019-20 season, but was often lost in the Big Ten shuffle, so he moved to the College of Charleston. But COVID-19 conditions created a rather minimalist experience during his single season.

“I probably walked two or three blocks like 90% of the time I was there,” Willis said, “or I was at the beach. I really didn’t get to see too much, because we didn’t have in-person classes. I was either at home or at the gym.”

Prepared for an overseas career, Willis put the pros on pause after a call from new Gophers coach Ben Johnson, who previously recruited him as an assistant. The opportunity to play point guard was appealing, so he came returned to Minnesota and started a master's program in youth and leadership development.

Moore and Willis are rare three-time transfers. They're joined by Jalen Coleman-Lands, who arrived at Kansas after Iowa State, DePaul and Illinois. Texas A&M forward Jalen Johnson tore his ACL in preseason practice after arriving from Mississippi State, having previously played at Saint Louis and Louisiana-Lafayette.

For Moore, the firing of coach Dave Leitao last year left him with yet another change to manage. With the confidence and peace gained from his father’s improvement, he chose Miami with encouragement from assistant coach Bill Courtney (they briefly overlapped at DePaul).

“I thought he was going to be good, but this guy’s been great, the way he gets our team to play together and the way he shares the ball,” Miami coach Jim Larranaga said of Moore recently.

Moore was Illinois' Mr. Basketball in 2016, playing at Morgan Park High School in Chicago. He initially committed to Memphis, but coach Josh Pastner left for Georgia Tech. Moore played one year at Cal, before coach Cuonzo Martin departed for Missouri.

He moved a little closer to home at Kansas, but after a sit-out year and a season in a reserve role, he felt unsettled — particularly with the struggles around his father's health.

Now playing in his fourth major conference, the 5-foot-11 Moore helped key an upset of Duke last month and his half-court shot banked in at the buzzer to beat Virginia Tech a few weeks later.

Though the Gophers have struggled in Big Ten play, Willis has two Big Ten Player of the Week awards this season. In a win over Rutgers on Jan. 22 (the only Gopher victory in 11 games since Christmas), Willis had a career-high 32 points and tied the program record with eight 3-pointers.

The extra pandemic-year effect will linger for three more seasons, and Willis offered his advice for those eyeing at the transfer portal: caution and patience.

“Each time I did it, I looked at myself in the mirror: ‘Was it on me? Is this truly going to be the better route? Or is it going to be better for me to stay here and stick it out and fight through the challenges?'” Willis said. “Nowadays it’s so hard. So many people are in kids’ ears about what they should and shouldn’t do. It makes it difficult for them to decipher who they should listen to and what they should listen to at the end of the day.”