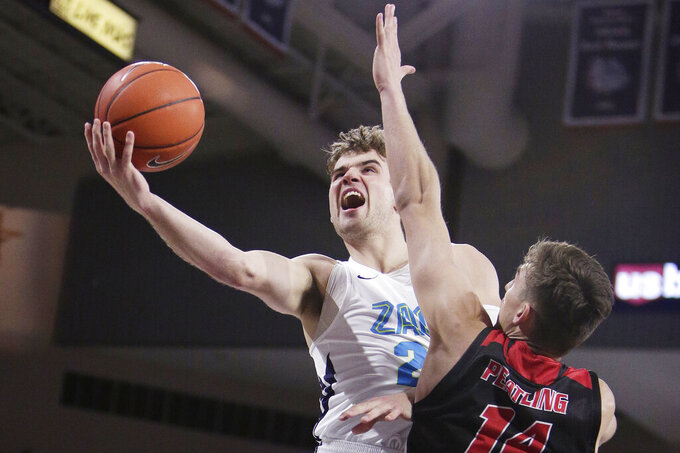 Gonzaga remained at No. 1 for a second straight week, receiving 63 first-place votes from a 65-member panel in the poll released Monday. No. 2 Duke and No. 3 Kansas each had one first-place vote, with Oregon and Ohio State rounding out the top five.

The AP Top 25 had been filled with tumult during a 2019-20 season of parity, with six different teams moving to No. 1 before Christmas. That's one short of the all-time record of seven, set in 1982-83.

The quiet time between Christmas and New Year's Day offered a bit of stability.

The Zags (13-1) did not play last week during a Top 25 schedule filled with lopsided games and just two matchups between ranked teams.

Ohio State dropped three places after losing 67-59 to West Virginia, which climbed six places to No. 16.

Nearly every other game involving Top 25 teams was decided by double digits.

Gonzaga, which has not played since beating Eastern Washington 112-77 on Dec. 21, has games against Detroit Mercy and Portland this week.

The Ducks (11-2) have lived up to the hype, their only losses coming in back-to-back games against Oregon and North Carolina at the Battle 4 Atlantis in the Bahamas.

Oregon has wins over three ranked teams and blew out Alabama State 98-59 on Sunday to move into the top five for the first time since reaching No. 4 in 2016-17, when the Ducks went to the Final Four.

Oregon also got a huge boost earlier this month when 6-foot-11 freshman N’Faly Dante became eligible after reclassifying as a 2019 signee.

The number of undefeated Division I teams is down to two following Liberty's 74-57 loss to LSU.

No. 8 Auburn has continued to play well following its run to last year's Final Four, improving to 12-0 after rolling over Lipscomb 86-59 last week. The Tigers have had two close games this season, beating South Alabama by one and outlasting Furman in overtime.

No. 13 San Diego State improved to 13-0 and moved up two spots this week following a 73-57 win over Cal Poly. The Aztecs have wins over Utah, Brigham Young and Creighton this season and moved atop the NCAA's NET rankings last week.

San Diego State is off to its best start in nine seasons.

West Virginia had the biggest jump in this week's poll with its six-spot climb. No other team climbed more than two places.

No. 7 Louisville had the biggest fall this week, losing four spots. No. 19 Virginia lost three spots after beating Navy by nine on Sunday.

Wichita State was the only team to move into the poll this week, debuting at No. 24. The Shockers, who beat Abilene Christian 84-66 on Sunday, are ranked for the first time since climbing to No. 3 in 2017-18.

Washington dropped out of the AP Top 25 from No. 21 following a 75-71 loss to Houston in the Diamond Head Classic title game in Honolulu on Christmas Day.