Jay Wright turning into legend in 19th season at Villanova 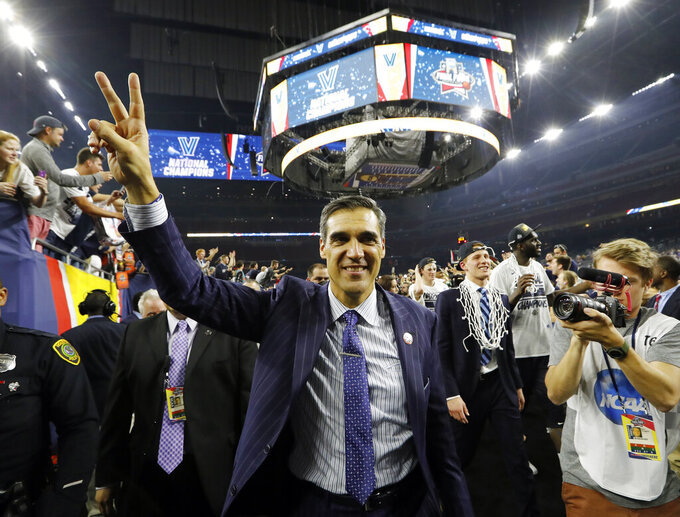 "Wait, are you talking about San Antonio or USA?" Wright asked.

The 57-year-old Wright certainly has the credentials to coach for gold: two NCAA national championships in 18 seasons at Villanova; stints coaching teams in the Pan American Games and World University Games; and this summer, serving as an assistant under Popovich for Team USA.

Hold the Linkedin update. Wright pushes back on the suggestion he could serve as a USA successor to Popovich after the 2020 Tokyo Games. Yes, Team USA flamed out this summer with a seventh-place finish at the World Cup, the lowest finish ever by a U.S. team in a major international tournament. But that's like losing the Maui Invitational compared to what's ahead with a team full of NBA stars next summer in the Olympics.

"I think it's best to have an NBA guy," Wright said. "You're coaching NBA guys. I worked with coach (Mike) Krzyzewski on the select team and I had great respect for him. After having done that with an NBA coach, I have even more respect for what he did with the NBA guys. It's just a totally different game. Just watching how Pop can communicate with them. How quickly he can get things done with them, based on the NBA game. You have a short period of time to get ready and there's an NBA vernacular with basketball that you can get things across real quick."

No matter his future on the international circuit, Wright is at a time in his career where it finally seems implausible he would leave the Main Line for any job, from the Clippers to Kentucky, just to mix it up or even for a big-bucks deal. Wright is The Don, the Big Cheese, the Head Honcho at a program and, perhaps, a campus that has blossomed under his watch. He is a natural fit at Villanova, with a record 448 wins, six Big East Conference championships, four Big East Tournament titles and 14 NCAA Tournament appearances. And those two national titles.

The biggest Nova fans might not recognize the No. 10 Wildcats when they open the season Nov. 5 against Army. Villanova's five-year run as the Big East preseason favorite has been ceded to Seton Hall, and the Wildcats have the youngest team in Wright's reign — five freshmen, three sophomores, and three juniors. The next deep NCAA title run might be a season or two away. And if it is, Wright plans to be on the bench to turn them into contenders.

"You don't need to be a Power Five school on the men's side to be able to get to a Final Four," Villanova women's coach Harry Perretta said. "The biggest thing that he does is, he gets guys to stay for four years."

Wright had long been rumored to make the leap to the next big coaching job and spent several summers denying he would move on from the program where he first served as an assistant under Rollie Massimino in 1987. Sure enough, Wright was on the short list to take over at UCLA, and the Los Angeles Times reported that Josh Rebholz, UCLA's senior associate athletic director, made a pitch to lure him away.

"We would have loved for Jay Wright to walk out on the floor, but even when we offered to double his salary, he still wasn't coming. Nothing we can do about that," Rebholz texted donors.

Wright said a friend of his, a noted UCLA alum now in the NBA, had reached out to him about the job.

The friend called again a few weeks later with a harder pitch pushing Wright to rethink his decision. Again, Wright said he was "flattered and honored" but declined the invitation.

"I love it here. I just don't want to leave," Wright said.

Why would he? His program exploded from best in Philly to best in the nation without a sniff of scandal, not since minor recruiting and benefits violations were found in 2004. While Villanova has self-reported occasional minor violations over the years, other elite programs like Kansas are dealing with a high-level NCAA infractions case tied to recruiting. North Carolina State also has received a notice of allegations. Arizona, Auburn, Creighton, Louisville, LSU and Southern California are among those under the NCAA microscope.

"I'm always nervous," Wright said. "We're not that perfect. We're not. Nobody is. It's a constant balance at all times."

That balance includes everything from hoops to honor rolls to hip hop.

The Wildcats helped usher in the era of having a rapper perform at the season kickoff, dating to 50 Cent in 2006. Drake, Nicki Minaj and T-Pain have all headlined, and this year's Hoops Mania star was Swae Lee — a night after Snoop Dogg dropped a profane appearance at Kansas. Wright understood how something so minor could seemingly blow into a major dustup.

"I'll never forget sitting with 50 Cent and begging him not to use the F-word — begging him — and he didn't even look at me," Wright said. "I was scared. But he never said it. He went out and put on an incredible show."

Wright, who hosts the "Talking Villanova" podcast, is relaxed in his office as he tells the story, laughing as he enjoys a morning snack of acai, sprinkled with coconut. He got a taste of the good life overseas with Popovich, a noted wine aficionado who taught a beer drinker like Wright the distinctions between a cabernet from Italy and a shiraz from Australia.

"If we had them right next to each other, I could taste the difference," Wright said. "But if I had one, I wouldn't be able to tell that's a great wine."

As his 19th season looms, Wright knows there has been no better blend than how he's fused with Villanova.