No. 18 Hawkeyes face pair of challenges in Big Ten race 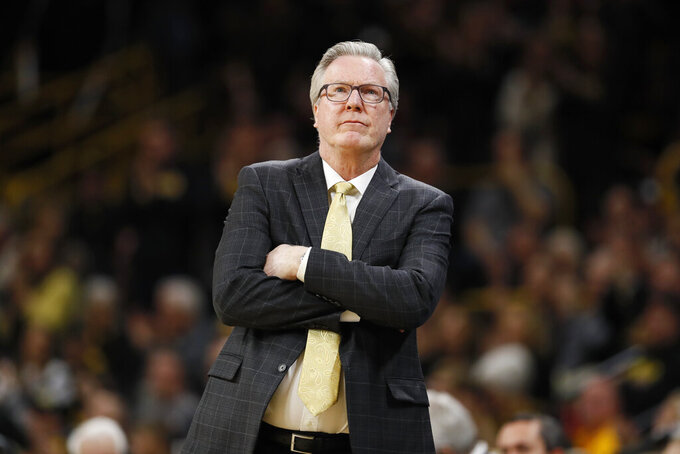 The No. 18 Hawkeyes have two games against ranked league opponents this week, the first when they visit No. 15 Maryland on Thursday. Then comes a Sunday visit from No. 19 Illinois, which entered the week tied with No. 14 Michigan State atop the league standings.

That marks two of the three games nationally matching a pair of ranked teams to headline the AP Top 25 schedule.

The Hawkeyes' strength has been on the offensive side, where Iowa (15-5) ranks third in the country in KenPom's adjusted offensive efficiency (117.9 points per 100 possessions). And 6-foot-11 junior Luka Garza ranks second in KenPom's national player of the year standings by leading the Big Ten in scoring (23.1) and ranking second in rebounding (10.7).

The Hawkeyes have built momentum with five straight wins since losses to Penn State and Nebraska in early January. That run includes a Jan. 10 win against the Terrapins, as well as Monday night's comeback from 12 down in the final seven-plus minutes to beat Wisconsin.

"We're not going to think about what happened three or four years ago — we don’t care about that," Iowa coach Fran McCaffery said after Monday's win when asked about his team's ability to rally compared to previous years. "We care about what's going on right now. And this team has the ability to execute, defend, and continue to fight.

“They have done it all year, hopefully will continue to do it, because if you're going to win in this league you have to do it.”

The last time No. 13 Kentucky and No. 17 Auburn met, the game sent the Tigers to the Final Four in Minneapolis last April. They'll play again Saturday at Auburn in a matchup of the Southeastern Conference's highest-ranked teams.

Kentucky (15-4), one of the record-tying seven teams to reach No. 1 this season, has won three straight games entering Wednesday's home game against Vanderbilt. Auburn (17-2) started 15-0 before losing road games at Alabama and Florida, though the Tigers had won two straight entering Tuesday's game at Mississippi.

Baylor hasn't lost since the season's opening week in a run that has carried coach Scott Drew's Bears all the way to No. 1. Now they're looking to extend that stay atop the AP Top 25.

The Bears (17-1) remained at No. 1 for a second straight week in Monday's poll. That's already a week longer than the program's only other appearance at No. 1 in January 2017.

Baylor returns to action at Iowa State on Wednesday and hosts TCU on Saturday.

Creighton (16-5) was the top vote-getter among unranked teams and could play its way back into the poll with a win Saturday at No. 8 Villanova.

Texas Tech, last year's NCAA runner-up, will have an even better chance to re-enter the rankings. The Red Raiders (12-7) had been ranked in 10 of 12 weeks before falling out of Monday's poll, but they host No. 12 West Virginia on Wednesday and then visit third-ranked Kansas on Saturday.

And in the Southern Conference, league-leading East Tennessee State (18-3) has won five straight entering this week's home games against Mercer and UNC Greensboro.