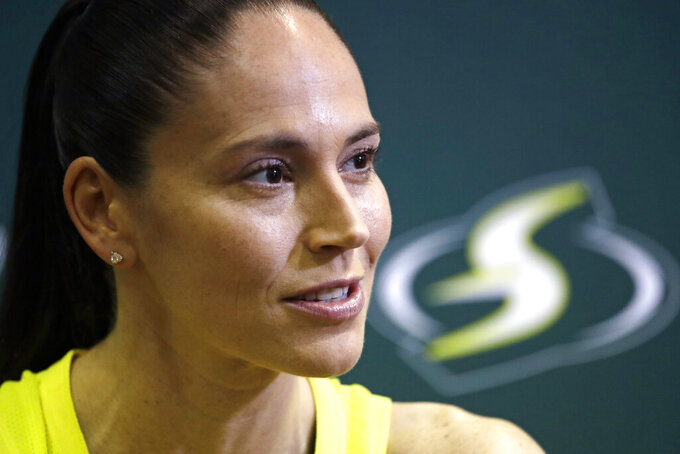 FILE - In this Monday, May 13, 2019, file photo, Seattle Storm's Sue Bird talks with media members at the basketball team's media day in Seattle. Groups that advocate for civil rights and women’s rights have joined notable athletes in asking the NCAA to move the first and second rounds of the 2021 men’s basketball tournament out of Idaho after the state passed a law banning transgender women from competing in women’s sports. A letter sent and signed by a list of professional athletes including Megan Rapinoe, Billie Jean King, Jason Collins and Sue Bird calls for the NCAA to move the games set to be held March 2021 at Boise State University. (AP Photo/Elaine Thompson, File)

BOISE, Idaho (AP) — Groups that advocate for civil rights and women’s rights have joined notable athletes in asking the NCAA to move 2021 men’s basketball tournament games out of Idaho after the state passed a law banning transgender women from competing in women’s sports.

A letter sent Wednesday and signed by athletes including Megan Rapinoe, Billie Jean King, Jason Collins and Sue Bird calls for the NCAA to take all championship events out of Idaho. The first and second rounds of the men's tournament are scheduled for next March at Boise State University.

The NCAA issued a statement opposing the Idaho law and had previously banned events in North Carolina in 2016 after passage of a law there that excluded gender identity and sexual orientation from statewide anti-discrimination protections. The North Carolina law also required transgender people to use restrooms in schools and state government buildings that correspond to the gender on their birth certificate.

The North Carolina law was repealed a year later and the NCAA lifted its ban on events in the state.

“Transgender athletes deserve the same dignity and respect entitled to all NCAA athletes. Because of HB 500, that simply isn’t possible in Idaho,” said Rodrigo Heng-Lehtinen, deputy executive director for policy and action with the National Center for Transgender Equality. “We applaud the NCAA for speaking out against HB 500 and now encourage them to back up their words with action.”

In March, Republican Gov. Brad Little signed the Idaho measure that received overwhelming support in the Republican-dominated House and Senate, but no support from Democrats.

The ban applies to all sports teams sponsored by public schools, colleges and universities. A girls’ or women’s team will not be open to transgender students who identify as female.

Backers said the law, called the Fairness in Women’s Sports Act, is needed because transgender female athletes have physical advantages.

The American Civil Liberties Union and Legal Voice has filed a lawsuit contending the law violates the U.S. Constitution because it is discriminatory and an invasion of privacy.

The groups also said the law scheduled to take effect July 1 is a violation of Title IX, the 1972 law that bars sex discrimination in education.

Two plaintiffs are bringing the lawsuit. One is an unnamed Boise area high school student who is cisgender. Cisgender refers to someone whose gender identity corresponds with the sex the person was identified as having at birth.

The other is Lindsay Hecox, 19, who will be a sophomore this fall at Boise State and hopes to qualify for the women’s cross-country team. She competed on the boys’ team at a Moorpark, California, high school before transitioning after graduation.

“Transgender people belong everywhere — and that includes in sports and in Idaho,” said Arli Christian, campaign strategist for the ACLU. “While the lawsuit against the state of Idaho moves through the courts, it is important for everyone to speak out so that Idaho — and the rest of the country — sees how misguided and dangerous this law is.”