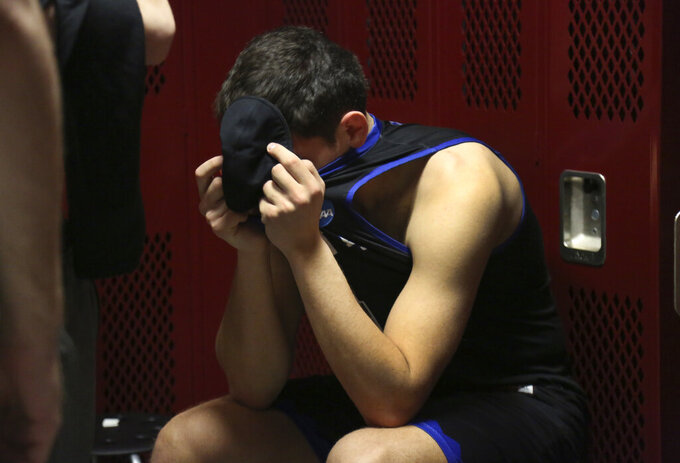 Gabriel Leifer (4) reacts to the Yeshiva Maccabees' loss to Johns Hopkins University in the first round of the NCAA's Division III basketball tournament, in Galloway Township, N.J., on Friday, March 4, 2022. The Maccabees lost to the Blue Jays, 63-59 at Stockton University Sports Center. (AP Photo/Jessie Wardarski)

GALLOWAY TOWNSHIP, N.J. (AP) — On a Sabbath evening, the Yeshiva University men’s basketball team held hands in a circle at a hotel where they gathered for postgame. Smiling, the Maccabees sang in Hebrew: “When the month of Adar begins, joy increases!”

It was the start of what's known as the happiest month in the Jewish calendar, when the joyful holiday of Purim takes place. It was also the start of March Madness. As the sun set, it was hard to tell that just a few hours before, there had been tears in the locker room — the Macs had lost the first game of the NCAA's Division III tournament and a chance to realize their dream of a national championship.

It was the end of an unforgettable three-year, four-season era, in which the team representing an Orthodox Jewish institution grabbed national and international headlines and inspired the Jewish people at a time of growing antisemitism and a relentless pandemic.

The NBA congratulated them on Twitter in December when they built a 50-game winning streak. Yeshiva also was ranked No. 1 in Division III for the first time. The team won three Skyline Conference championships in four years and went on to the Division III tournament, where last Friday they lost 63-59 to Johns Hopkins University.

In the locker room after the game, some players — and even their usually stoic coach — choked back tears. But they reminded each other that their achievements went beyond basketball. They made the Jewish people proud: Kids dressed up like them for Purim and pretended to be them in pickup games. The home crowd roared when they scored often wearing the skullcaps that identify them as Jewish. Their faithful fans followed them on the road or tuned in to live broadcasts of their games around the world.

“That’s historical stuff,” coach Elliot Steinmetz told them. The former Yeshiva player, who works full time as a lawyer, took the coaching job in 2014 with one goal: recruiting the best Jewish players nationwide. “That’s bigger than wins and losses," he said.

The players came from across the United States and vary in observance of their faith — from Max Leibowitz, who leads them in prayer and gives them lessons inspired by the Torah before they go on the court, to Ofek Reef, a 6-foot junior from Texas who goes on the court without the skullcap, wearing tattoos and a Star of David-shaped earring, and captivates the crowds when he dunks over taller rivals.

The roster also includes Jordan Armstrong, a 6-foot-8 forward who wears a beard and a man bun and describes himself as a hippie from northern California, and Gabriel Leifer, who returned to play as a graduate student while he juggled a full-time job at an accounting firm and became the team’s all-time leader in assists and rebounds.

All of them, though, are united by their Jewish identity and their love of basketball.

The Macs were led by senior Ryan Turell, a 6-foot-7 point guard, who turned down Division I offers to play for the Orthodox school in New York City’s Washington Heights neighborhood because he wanted to be a “Jewish hero.”

Professional scouts took notice of his talent and followed him closely. ESPN and The New York Times profiled him when the Macs had the longest active winning streak in men's basketball and he became the school's — and for a while, the country's — top scorer. His goal? To become the first Jewish Orthodox player in the NBA, so he can continue to inspire Jewish people “to stay proud.”

“It’s a dream come true,” Turell said. “The fact that people have pride to wear a kippah or be Jewish is what we set out to do, and we accomplished it.”

The game against Johns Hopkins came down to the final seconds. The Macs were losing 60-52 with less than a minute and a half left to play. Turell then led a comeback, scoring three straight free throws followed by a three-pointer. Trailing just by two with less than a minute on the clock, Turell had the tying shot but missed it and Johns Hopkins won, scoring on free throws. After the buzzer, Turell embraced every teammate on the court and congratulated them on an amazing season.

“It’s about Jewish pride. It’s really meaningful for myself and for the kids. They look at them like heroes,” said Daniel Hermann, who attended the game at Stockton University in Galloway, New Jersey, with three of his children.

Two years ago, the Macs advanced to the Sweet 16 of the Division III tournament for the first time.

The team made history in their own way playing the first U.S. sports event held without fans because of COVID fears.

After a four-hour bus ride for their next game in Virginia, they got the news that COVID-19 had forced the NCAA to cancel the tournament; the pandemic put a sudden, shocking end to their season and their dream of winning a national championship.

In the next year and a half, some teammates and their families across the U.S. contracted COVID-19. Players quarantined, practiced isolated in small groups, and saw game after game canceled. Two seasons later they had their comeback to reach the top of the national rankings, and a shot at the Division III title.

“Our team does not just play for a school, they play for a people," said Rabbi Ari Berman, Yeshiva's president.

“Countless stories of how our basketball team has inspired people from around the world have poured into our offices," he said. "Children gained new heroes, Jews who were distant from their identity re-connected, some started attending services and lighting Shabbat candles again.”

“But most of all, through their excellence, humility and character, our team emanated Jewish pride to the world," Berman added. "In a time of global darkness and too frequent antisemitism, these amazing students were a beacon of light.”

Associated Press religion coverage receives support through the AP’s collaboration with The Conversation US, with funding from Lilly Endowment Inc. The AP is solely responsible for this content.