No. 1 Vols visit No. 5 Kentucky to start demanding stretch 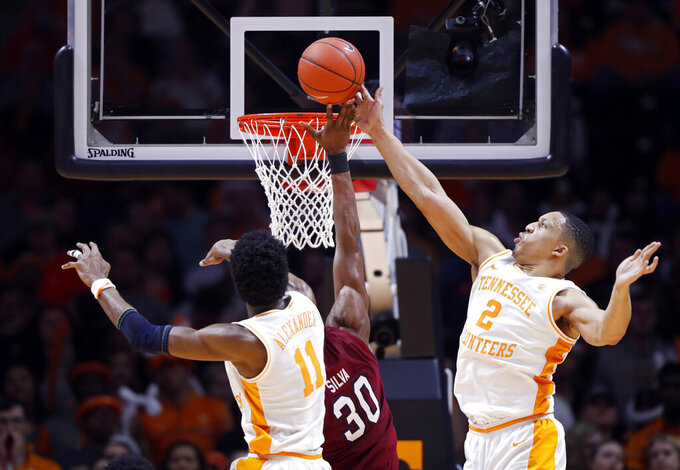 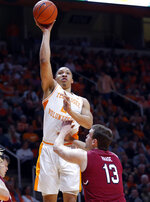 KNOXVILLE, Tenn. (AP) — Tennessee has won a school-record 19 straight games but hasn't faced a Top 25 team in over two months.

That's all about to change as the top-ranked Volunteers close the regular season with a demanding stretch that should prepare them for what they'll face in the NCAA Tournament. It starts Saturday when the Vols (23-1, 11-0 SEC) visit No. 5 Kentucky (20-4, 9-2).

The rivalry game will be the first matchup between two SEC teams ranked in the top five since No. 2 Kentucky's 69-67 triumph over No. 3 Florida on March 8, 2003. It also is Tennessee's first game against a Top 25 team since a Dec. 9 victory over No. 3 Gonzaga , which was ranked No. 1 at the time.

"I know they see the hype, you can't help but see it around this game, but hopefully there's going to be more and bigger ones," Tennessee coach Rick Barnes said. "I don't think this game is going to define our season or Kentucky's. There's still too much basketball to play to do that."

Kentucky is coming off a 73-71 home loss to No. 19 LSU and has never suffered back-to-back home losses in John Calipari's 10 seasons as coach. Calipari is hoping the loss made his team tougher.

"I think you almost have to get knocked in the mouth and take a loss," Calipari said. "I texted them probably two hours after the game and basically said, 'It's tough losing, but we needed this,' because people were moving in the wrong direction and not listening to what we were saying."

Tennessee is hoping it hasn't fallen into that trap while putting together the longest active winning streak in Division I. The Vols eked out a 71-68 victory over Alabama on Jan. 19 and rallied past Vanderbilt 88-83 in overtime four nights later, but they've since won each of their last six games by at least 12 points.

The concern for Tennessee is whether all those lopsided wins could prevent the Vols from being sharp for this tough portion of the schedule.

"We've just got to find a way to put it all together," Tennessee's Admiral Schofield said. "That's why I'm excited, because our best basketball is ahead of us."

Six of the Vols' final seven games are against teams rated 32nd or higher in the NET rankings that have replaced the RPI as a factor in NCAA Tournament selection for men's basketball. The lone exception comes Tuesday when Tennessee hosts Vanderbilt.

But in some respects, Tennessee's experience edge can be a bit misleading.

Although Kentucky's players are young, Calipari has built a program accustomed to playing games with these types of stakes over the last several years. Tennessee has been ranked No. 1 for nearly a month now and won a share of the SEC regular-season title last year, but the Vols acknowledge this is still relatively unfamiliar territory.

"We're a team that's experiencing all this together for the first time," Tennessee's Kyle Alexander said. "We're an experienced team as far as juniors and seniors go, but we've only been to the NCAA Tournament once and we lost in the (second) round, so all this stuff is new to us, being No. 1 and all that stuff. We're kind of taking it step by step and game by game."

AP Sports Writer Gary B. Graves in Lexington, Kentucky, contributed to this report.