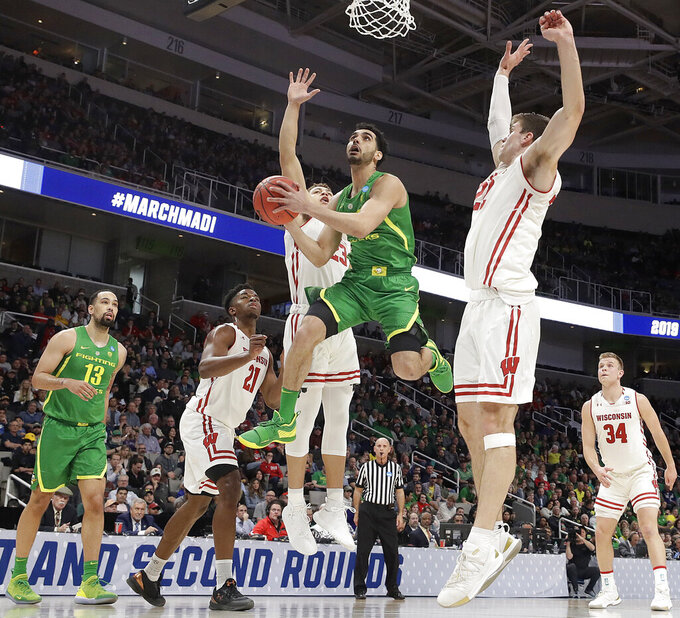 FILE - In this March 22, 2019, file photo, Oregon guard Ehab Amin shoots against Wisconsin during the first half of a first-round game in the NCAA men's college basketball tournament, in San Jose, Calif. Ehab Amin is doing his best to make the Egyptian’s lone season at Oregon memorable. The senior who transferred after graduating from Texas A&M Corpus Christi has helped the Ducks reach the Sweet 16 with his energy both on and off the bench disrupting opponents. (AP Photo/Chris Carlson, File) 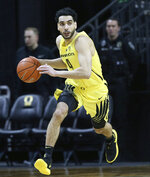 LOUISVILLE, Ky. (AP) — Ehab Amin's believes his unusual journey to the NCAA Tournament that has taken him from his home in Egypt to Wisconsin, Texas and now Oregon has been worth every second.

The guard chose basketball over soccer for the chance to play some day in the tournament. He is fully embracing the moment.

"And it finally happened," Amin said Wednesday. "It happened my senior year."

Actually, Amin made his NCAA Tournament debut in his fifth college season and has helped No. 12 seed Oregon (25-12) reach the Sweet 16 in his lone year with the Ducks.

It has been an unusual trek.

Amin's parents put him in every sport as a child including swimming, handball, volleyball, basketball and soccer. He stuck with basketball, playing with clubs and three years with the Egyptian National Team. Amin was named the best shooter under 16 in Africa in 2011 when he also was MVP of the under-16 African championship in 2011 and again in 2012 for under-16.

With long-distance interest from Texas A&M Corpus Christi, Amin decided it was time to see if he could be better and headed to the United States.

First, he arrived in Wisconsin to spend his senior year of high school at St. John's Military Academy to work on his grades and prepare for college. An injury kept him from playing that season. Living in Delafield — between Madison and Milwaukee — in a frigid winter with no other Egyptians and a heavy accent didn't ease any of Amin's culture shock.

His parents had a simple message for him: stick it out.

"I mean, it was all for basketball, and I knew that was why I was here," Amin said.

He transferred to Oregon after graduating from Texas A&M Corpus Christi and went from starter over the first seven games to providing energy off the bench.

Amin played a pivotal role in the Ducks' 73-54 win over UC Irvine to advance to Thursday night's South Region semifinal against top-seeded Virginia (31-3) in Louisville. He scored 12 points by knocking down all four of his 3-pointers, grabbed six rebounds, handed out two assists and made three steals in providing a big boost.

"We were really struggling against California-Irvine, and he came in and hit a big shot," Oregon coach Dana Altman said. "But defensively (he) really got us going again. So his energy off the bench, defensively has been really good. He's been real active on the boards. But he's really a good leader defensively and he's been making some big shots for us."

He also made an impact in Corpus Christi, which with the heat at least reminded Amin of his home in Alexandria, Egypt.

But the Islanders helped him become more familiar with the shot clock, balls, style of play. Amin set the Southland Conference record in 2016-17 with 124 steals when he led the nation with 3.4 steals per game, then spent last season sidelined by an injury.

Altman came calling, looking for help to replenish his roster. Amin decided to head to Eugene, Oregon, after an opportunity at Nevada fell through. Again, he found himself in an area with few, if any, Egyptians aside from himself.

"It's been really different and tough for me," Amin said. "But I think everywhere I go my teammates do a good job of like blending me in, especially like here my roommates Payton (Pritchard) and Paul (White) and Will Johnson. I spent most of my time with them."

Pritchard's puppy helped break the ice between the new roommates, making a mess in Amin's room.

"He was cool with it," Pritchard said. "I had to clean it up though."

Daily phone calls with his parents also help with the occasional visit. His older brother has visited twice and will come to a game if the Ducks manage to advance past Thursday night.

Amin said his parents don't really know the game of basketball, but want what's best for him. Every time he plays, they are watching back home in Egypt no matter the time difference.

"They watch every single game," Amin said. "They wake up 30 minutes, an hour before the game to get everything ready. Watch it and they give me my pregame call before the game and after the game. So I really am grateful for my family and my support system including my mom and her brothers and dad."

Amin hopes he and the Ducks can them a reason to continue watching a little while longer.