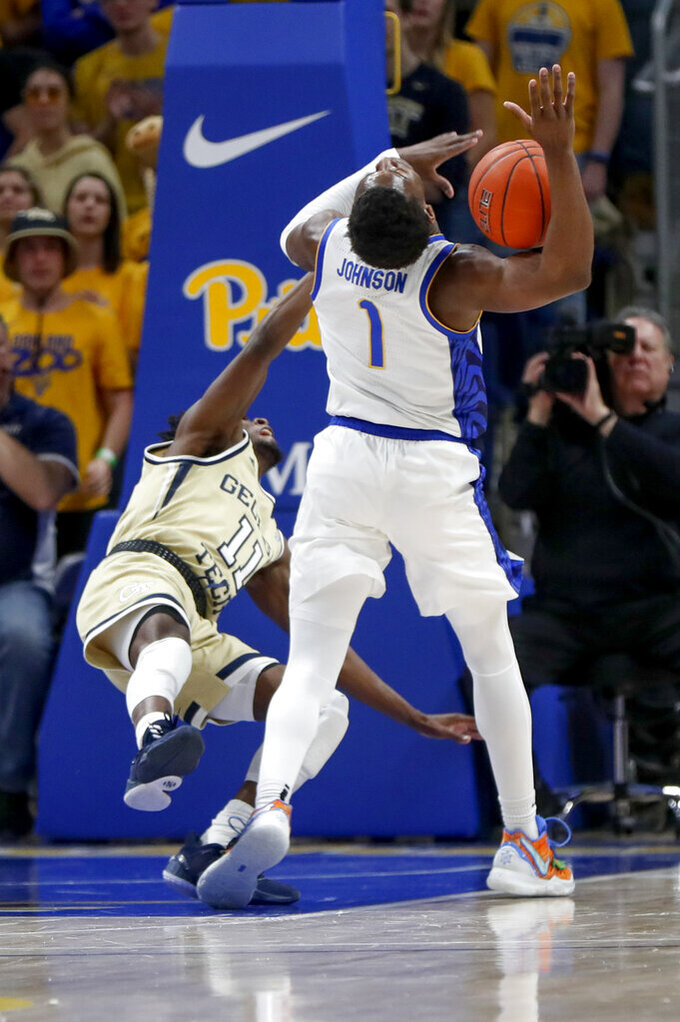 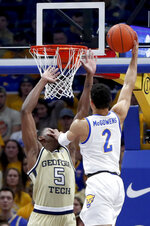 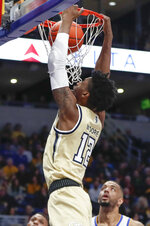 PITTSBURGH (AP) — It wasn't the three three-pointers Justin Champagnie drained — all without a miss — that grabbed Pittsburgh coach Jeff Capel's attention. It wasn't the 15-footers the freshman knocked down while finding the soft spots in Georgia Tech's zone defense. It wasn't the two driving lay-ups that highlighted just how far Champagnie has come as a ballhandler.

No, it was the dirty work. Always the dirty work. For all of Champagnie's talent, it's the way the 6-foot-6 Champagnie relentlessly threw his body around in a 73-64 win on Saturday that drew a mix of respect and admiration from his coach. While Champagnie showcased his rapidly evolving game while throwing in a career-high 30 points, it was his fourth offensive board, the one that resulted in a putback that gave the Panthers a 66-57 lead with 2:25 to play that stood out.

“I thought he did some big time things, none bigger than the offensive rebound finish he got later in the game,” Capel said of Champagnie, the linchpin of Capel's first recruiting class. "He has talent, he’s a great kid. He wants to be good. He’s starting to figure out. It’s hard. Everything you want to accomplish is on the other side of hard.”

The other side of hard is a destination the Panthers (15-9, 6-7 Atlantic Coast Conference) are pushing toward in the middle of Capel's second season. Two years after going winless in the ACC, Pitt is clawing its way back to respectability. It took another step after forcing the Yellow Jackets (11-13, 5-8) into 22 turnovers and pulling away following a late technical foul against Capel that nearly cost the Panthers dearly.

Pitt led 57-52 with less than 5 minutes to go when center Terrell Brown drew a late whistle for fouling Georgia Tech's James Banks III. Capel threw his towel in disgust, drawing a technical for his efforts as the crowd roared its disapproval.

“That was really stupid of me,” Capel said.

Maybe, but it provided the Panthers with the jolt they needed to pull away. Georgia Tech's Jose Alvarado made both of the technical free throws but Banks — a 66% free throw shooter — missed both of his. The Panthers then responded with an 11-3 run capped by Champagnie drilling a pair of free throws shortly before he walked off to a standing ovation.

Three days after going for 20 points and 11 rebounds in a loss to Notre Dame, Champagnie was even better. He made 12 of 17 shots from the floor, including all three of his 3-pointers. Champagnie pointed to a conversation he had with Capel in the aftermath of the setback against against the Fighting Irish as giving him an extra confidence boost.

“He told me to come out here and bring energy ... just play my game and have everything come to me,” Champagnie said.

Trey McGowens added 14 points and nine assists for Pitt. Brown finished with nine points and six rebounds in his first start since late November and Xavier Johnson chipped in 11 points and seven assists as Pitt relied heavily on its starting five with key reserve Ryan Murphy missing his third straight game while dealing with a concussion.

Michael Devoe led Georgia Tech with 22 points and seven assists while Moses Wright chipped in 12 points. Banks III added seven points and 11 rebounds but the Yellow Jackets after erasing a nine-point deficit. While Georgia Tech shot a respectable 48% (24 of 50) from the floor, the steady stream of turnovers led to 20 points the other way.

“It kind of bit us in the butt today with the turnovers,” Yellow Jackets head coach Josh Pastner said. "Too many possessions we gave away. That's not going to win the game.”

Not with the way Champagnie was going. While he was mostly a slasher in high school, he's worked hard to diversify his approach since arriving at Pitt last summer. He's becoming increasingly comfortable behind the 3-point line but the best facet of his game might be his basketball IQ. When Pitt went away from him after going up 50-41 midway in the second half and Georgia Tech crept to within a point. Following a timeout Champagnie flashed to high post repeatedly, eventually finding enough room to knock down a jumper.

It was the kind of heady play that drew Capel to Champagnie on the recruiting trail, the kind Capel feared he'd have to wait to see until next season when Champagnie injured his knee in September. Capel initially feared Champagnie was dealing with a torn ACL. Instead it was just a sprain. Champagnie was ready in time for the opener against Florida State and now appears on his way to becoming one of the top freshmen in the conference.

Georgia Tech: The Yellow Jackets have an interesting resume that includes a blowout win over Virginia Tech on Tuesday. Yet they need to take better care of the ball if they want to have any shot at elbowing their way into the middle of a clustered ACC.

Pitt: Champagnie's growth gives Pitt a viable third scoring option behind McGowens and Johnson. Just as importantly, the defense that was shoddy while getting lit up by the Fighting Irish responded by suffocating the occasionally sloppy Yellow Jackets.

Georgia Tech: Hosts No. 5 Louisville on Wednesday. The Yellow Jackets fell to the Cardinals 68-64 on the road last month.

Pitt: Welcomes Clemson on Wednesday night. The Panthers have lost six straight to the Tigers.