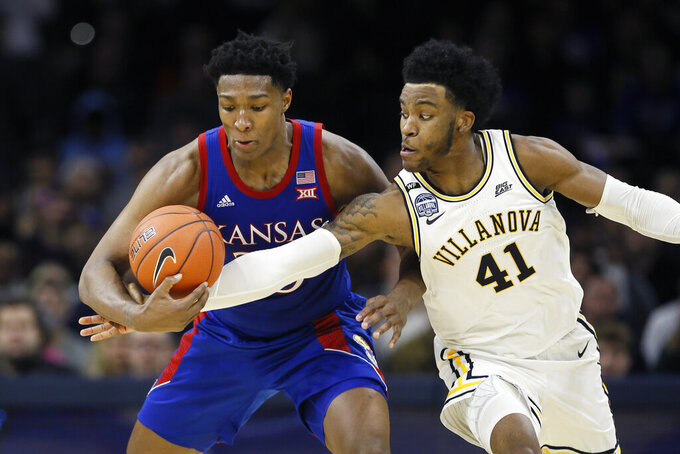 Villanova's Saddiq Bey, right, tries to knock the ball away from Kansas' David McCormack during the second half of an NCAA college basketball game, Saturday, Dec. 21, 2019, in Philadelphia. (AP Photo/Matt Slocum)

Gonzaga is the latest No. 1 in The Associated Press Top 25 men’s college basketball poll that has had no stability on the top line.

The Bulldogs moved up a spot to take over for Kansas, which lasted only a week at No. 1 before losing at now-No. 10 Villanova. At the time, that had marked the first time the AP poll has had five different No. 1s before New Year’s Day.

And now it’s six, with the Zags (13-1) earning 54 of 65 first-place votes to outdistance Ohio State in a year with no dominant team.

Gonzaga's only loss was to No. 11 Michigan in the championship game of the Battle 4 Atlantis in the Bahamas on Nov. 29. The Zags have won five straight since, including victories at No. 21 Washington and No. 24 Arizona as well as a home win against North Carolina.

“I don’t think they should be doing polls this year until March,″ Gonzaga coach Mark Few said after Saturday’s win against Eastern Washington. “I’m serious, I mean, it’s just an effort in futility at this point.”

This is the eighth season to have as many as six different teams reach No. 1, though it has happened now three times in the past five years. The record for an entire season is seven, set in 1982-83 when names like Michael Jordan and Ralph Sampson were still in the college ranks.

Michigan State, Kentucky, Duke and Louisville were the first four teams to hit No. 1. Throw in Kansas, and none has won more than twice before suffering a loss.

The Zags won’t stumble this week, at least; they don’t play again until hosting Detroit Mercy next Monday evening after another poll is released.

The second-ranked Buckeyes (11-1) have put together a nonconference resume likely to help their NCAA Tournament seeding come Selection Sunday.

The Buckeyes had lopsided wins against Villanova and at then-ranked UNC, then beat Kentucky over the weekend in a matchup of top-6 teams. That helped them earn nine first-place votes to jump three spots Monday.

Louisville remained at No. 3 ahead of its state rivalry game against Kentucky this weekend, followed by Duke and Kansas, which fell four spots to No. 5.

Villanova made the week's biggest jump, climbing eight spots after taking down the Jayhawks. No. 12 Butler and No. 15 San Diego State also had big moves, each climbing five spots.

In all, 16 teams moved up from last week.

Six teams fell in the poll, all taking significant slides.

The biggest was Kentucky, which fell 13 spots to No. 19 after losses to Utah and Ohio State in Las Vegas. Arizona fell eight spots to No. 24 after following the Gonzaga loss with a loss to St. John's. And Virginia fell seven spots to No. 16 after a home loss to South Carolina.

Louisville and Duke were the only teams to remain in their position from last week.

Iowa was the lone new addition at No. 25, with the Hawkeyes (9-3) cracking the poll for the first time this season after beating Minnesota, Iowa State and Cincinnati.

Tennessee (No. 21) fell out of the poll to make room for Iowa after a loss at Cincinnati.

Iowa's arrival gave the Big Ten a national-best six teams in the AP Top 25, a haul that included preseason No. 1 Michigan State at No. 14 and Penn State at No. 20.

The Atlantic Coast and Big 12 conferences were next with four teams each while the Pac-12 had three.