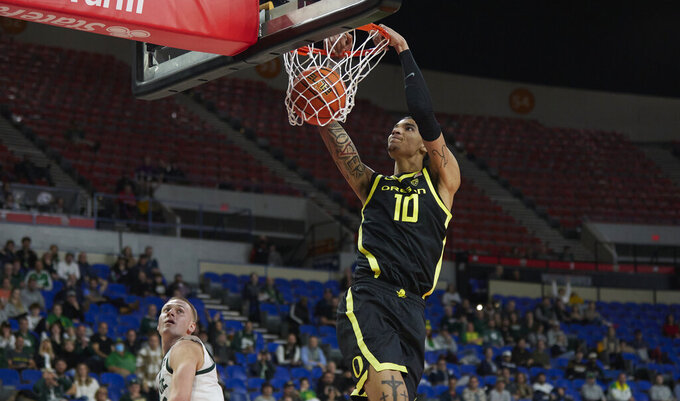 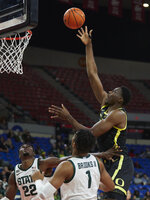 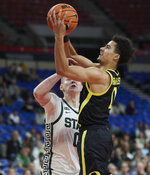 PORTLAND, Ore. (AP) — Joey Hauser had 18 points and 10 rebounds to help No. 12 Michigan State hold off a strong challenge from Oregon to win 74-70 in the consolation round of the Phil Knight Invitational tournament Friday night.

Tyson Walker added 18 points and eight assists for the Spartans (4-2), while Pierre Brooks II had 15 points.

Will Richardson led the Ducks (2-4) with 28 points, five rebounds and eight assists. Kel’el Ware added 17 points and Rivaldo Soares had 10.

The Ducks got out to a fast start in the first half behind Ware, leading by as much as eight before the Spartans fought back to regain the lead with two minutes remaining. Michigan State closed the half on a 14-3 run to take a 33-30 lead into halftime.

“I wasn’t happy with the way we played,” Michigan State head coach Tom Izzo said. “At different times in the game, it was a difficult stretch for us. We were able to piece some meals together.”

The second half played out much the same way. Oregon opened the half on a 6-0 run to retake the lead and kept pace with Michigan State until just over eight minutes remaining, when the Spartans began an 8-0 run and regained the lead for good.

“We made some really stupid fouls,” said Oregon head coach Dana Altman. “We didn’t really give ourselves a chance to finish the game. But guys tried to compete."

Michigan State moved the ball well all night, with 20 assists on 27 made field goals.

Michigan State: The Spartans rebounded from Thursday’s loss to Alabama to salvage a win in the PKI tournament.

Oregon: The Ducks bounced back nicely from Thursday’s blowout loss to UConn and put up a much stronger fight against another ranked team.

Michigan State: The Spartans face Portland in the fifth-place consolation game on Sunday.

Oregon: The Ducks play Villanova in the seventh-place consolation game on Sunday.