The Latest: Big East opts not to play fall sports 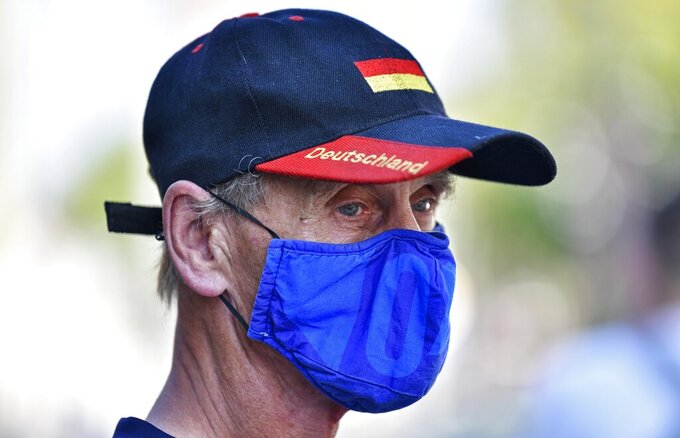 Due to the new coronavirus pandemic a man wears a face mask of the German first division soccer team FC Schalke 04 and a hat with the word reading "Deutschland" (Germany) in Gelsenkirchen, Germany, Wednesday, Aug. 12, 2020. (AP Photo/Martin Meissner)

Teams will still be allowed to practice and have team activities that are consistent with individual campus policies.

Men’s and women’s basketball are not affected at this time and will be evaluated at a later point.

Lawrence has helped spearhead the #WeWantToPlay movement. That's a coalition of players calling on colleges not to cancel the upcoming season because of coronavirus concerns and give student-athletes greater say as it considers safety issues.

Trump said Orgeron “feels his players just want to be out there.”

The president said he’s hopeful that both college and high school football would be played in the fall. The Big Ten and Pac-12 said Tuesday they were postponing their football seasons.

The Big South Conference has decided to delay its fall sports seasons with the hopes of playing in the spring. But it will allow football-playing members to schedule up to four nonconference games in the fall at their own discretion.

Commissioner Kyle Kallander says the decision was made to protect student-athletes during the coronavirus pandemic. He says the league hopes to play conference football, men’s and women’s cross-country, men’s and women’s soccer and volleyball in conjunction with its spring sports and still crown champions in all 19 of its sports.

The Division III New Jersey Athletic Conference has decided the delay the start of conference play in basketball until Jan. 20 because of the coronavirus pandemic.

The conference’s Board of Athletic Administrators also agreed to reduce the number of NJAC games played by each team from 18 to 9 for both men and women.

The Division II Gulf South Conference is postponing competition in football, basketball, soccer and volleyball until at least Jan. 1.

The league noted that the NCAA has identified those as high-risk contact sports that are subject to significant testing requirements for all student-athletes and personnel.

The Birmingham, Alabama-based conference’s Board of Directors cited health and safety of athletes and others on campus, mandatory participation protocols from the NCAA Board of Governors and the cancellation of Division II fall championships.

The league said it would evaluation options for spring seasons in football, soccer and volleyball.

The Washington Football Team will at least begin the NFL season playing without fans in its stadium.

The team formerly known as the Redskins says it plans to play home games at an empty FedEx Field in Landover, Maryland, “out of an abundance of caution due to the rapidly changing dynamics of the COVID-19 pandemic.” The decision can be reevaluated if conditions improve throughout the course of the season.

“This decision was not an easy one,” owner Dan Snyder said. “But after several discussions with federal, state and local officials – along with input from some of the nation’s foremost medical experts, based right here in the nation’s capital – we are confident that it is the right one.”