Life on the bubble: Brackets set for return of March Madness 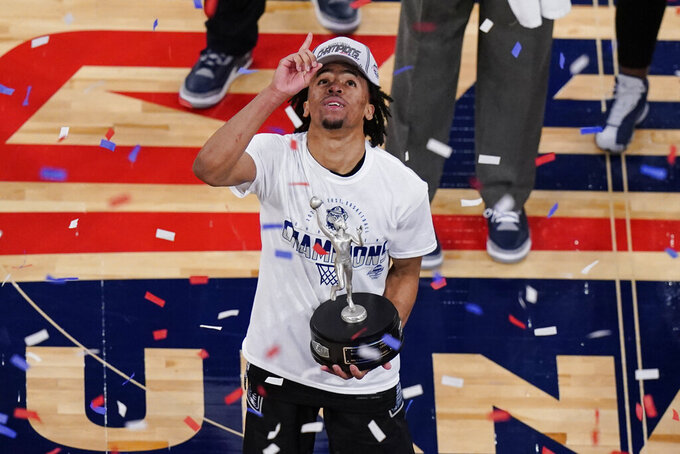 The biggest unknown leading into a March Madness bracket reveal more than a year in the making had nothing to do with bubble teams or top seeds. Instead, it was the not-so-simple matter of which programs would be healthy enough to play.

Kansas and Virginia, two programs hit with COVID-19 breakouts over the past week, made it into the bracket released Sunday by the NCAA selection committee. It was a signal that both teams believe they’ll have enough healthy players to be ready for their tip-offs next weekend.

That there was any doubt about the Jayhawks and defending champion Cavaliers securing spots in the 68-team field was the most jarring reminder that the 2021 tournament itself will look and feel much different than any that's come before.

“The one thing I’ve found out through this, probably as much as anybody, is expect the unexpected,” said Kansas coach Bill Self.

A year after the tournament was canceled as the COVID-19 virus was mushrooming into a worldwide pandemic, all 68 teams will gather in Indiana for all 67 games beginning Thursday and ending April 3 and 5 with the Final Four. But all it takes is a single COVID outbreak to upend the finely calibrated beauty of that plan. Multiple outbreaks could crater the entire endeavor.

Selection committee chair Mitch Barnhart said the committee was in frequent contact with leaders at Kansas and Virginia to ensure "the protocols were being met that would allow them to come to Indianapolis and participate.”

“We’re confident at this point that we’re moving forward to tip off Thursday with a full field of 68," Barnhart said.

Virginia coach Tony Bennett said most of his team remained in quarantine Sunday night, but expected to be in Indy this week.

There were no surprises among the four No. 1 seeds. Gonzaga, Baylor, Illinois and Michigan earned those slots – with the Bulldogs the early 2-1 favorite to win it all and become the first team since the 1976 Indiana Hoosiers to finish a season undefeated.

There was also none of the traditional drama about who was going where — which team was getting shipped to Boise, which was staying close to home in Memphis. The NCAA did, however, keep the names of the regions — East, West, Midwest and South — even though everyone's gathering together in a single city.

The last of the 37 at-large bids went to Drake and Wichita State, which play Thursday in a First Four game, and UCLA and Michigan State, two decorated programs with surprisingly low seeds that meet in another play-in game.

Four teams that didn't make it — Louisville, Colorado State, St. Louis and Mississippi — have been put on stand-by. They could find their way into the bracket if a team in the field notifies the NCAA by Tuesday night that it must withdraw because of health concerns. After that, if a team pulls out, its opponent will advance via what is essentially a forfeit.

Fittingly for such an unpredictable season, some teams hoping to sneak in off the bubble were denied when Oregon State, picked last in its conference in some preseason polls, and Georgetown, a storied program coached by its own former superstar, Patrick Ewing, won their conference tournaments to steal bids they wouldn’t otherwise have won.

“It’s a different year. Different world,” Ewing said. “The pandemic has definitely changed everything. I’m here quarantining in a room for 24 to 48 hours before we can get out and do things.”

Another unexpected entry is a familiar face: Rick Pitino. The coach, ousted at Louisville after a sordid recruiting scandal that enveloped the program for years, led his new team, Iona, from the ninth seed in the Metro Atlantic Athletic Conference all the way to the league title and the automatic bid that comes with it. Pitino said he'll bring eight suits to Indy, just in case. Big talk for a team that played only 13 regular-season games because of COVID-19 concerns that sidelined the Gaels for weeks. It was that kind of season.

Speaking of which, for the first time since 1976, both Duke and Kentucky will both be missing from the tournament. Like Virginia and Kansas, Duke pulled out of its conference tournament last week because of COVID-19., marking the end of a 13-11 season that never got on track.

Virginia and Kansas were never in doubt until the coronavirus hit both programs. The Jayhawks (20-8) will bring a No. 3 seed into the tournament's West region (The NCAA chose to keep the usual geographical names of the regions even though everyone's playing in the same place) while the Cavaliers (18-6) will be a 4 seed in the same part of the bracket. They come in as the most unusual of defending champions.

They won it all in 2019, and were poised for the run at a repeat last March when sports got wiped off the map by the still-nascent pandemic.

A year later, sports are back, but the hoops the NCAA is jumping through to make this tournament go are a symbol of how far we are from normal.

The decision to place all the games in and around the Indianapolis area is a first-of-its-kind move. Also unique are the quarantine-like situations all teams will be under during their stay. Players will get their own rooms and teams will have their own floors in a cluster of hotels around the downtown convention center. That facility, usually a magnet for fan fests and coaching conferences, will turn into the practice and meeting area for all the teams. Players will have to produce negative tests for seven days before arriving in Indianapolis to be eligible to play.

In one of its most eye-grabbing tidbits, the NCAA announced that if a team is hit with the virus but still has five players who can pass the protocol, that’s enough to get on the floor for tip-off.

All par for the course and part of the plan for March Madness during a pandemic.

“This year has been unlike any other year we’ve ever been through,” said Tad Boyle, the coach of fifth-seeded Colorado. "And I’m hopeful unlike anything we’ll go through again.”