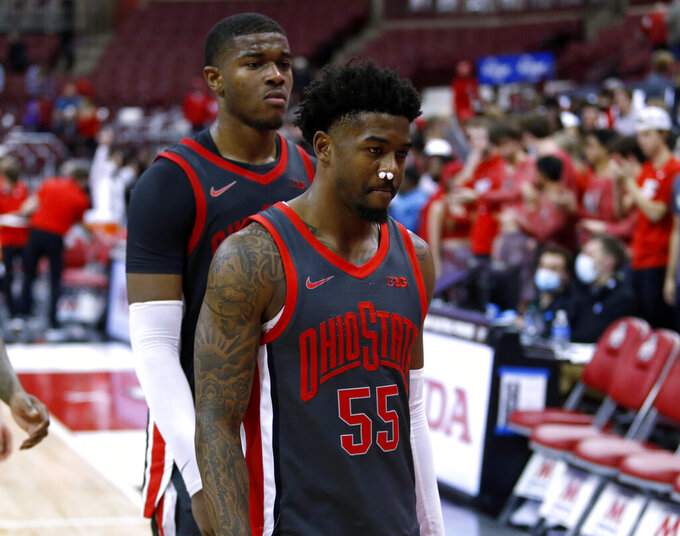 The Cornhuskers (9-21, 3-16 Big Ten) bested a ranked opponent for the first time under third-year coach Fred Hoiberg. He came in 0-23 against teams in the AP Top 25, and Nebraska was 0-24 overall since beating a ranked Maryland squad during the 2019 Big Ten Tournament.

C.J. Wilcher added 15 points on 6-of-11 shooting for the Huskers, who overcame a seven-point deficit in the first half and won their second straight game.

“To have some momentum, something to feel good about, I think is very important,” Hoiberg said. “Just keep battling, keep grinding, keep going in and practicing and getting better. I like our mentality right now.”

Ohio State got within four points with 55 seconds remaining, but the Huskers went 5-for-6 at the free-throw line to put away their first win over the Buckeyes since Feb. 18, 2017.

The Huskers shot 49.1% overall and 56% in the first half. Ohio State led 26-19 midway through the half, but Nebraska took a 43-36 advantage thanks to an 8-minute stretch without a field goal for the Buckeyes. The cold spell finally ended when Branham connected on a 3-pointer with 10 seconds left in the half.

Nebraska: The Huskers scored at least 78 points and shot 49% or better for the third consecutive game. They hadn’t done either in back-to-back conference games this season until beginning their streak against then-No. 25 Iowa on Friday.

Ohio State: The Buckeyes shot below 40% and failed to lead in the second half for the second game in a row. This is their second straight loss to an unranked opponent and third in five games.

“We’re obviously really struggling right now. That’s no secret,” Holtmann said. “We’ll see if this group has the ability to find a way to gain a little trust in each other and confidence.”

Trey McGowens, Bryce's brother, had seven points, six rebounds and four steals for Nebraska. He missed 15 games this season after surgery on a broken foot, including the first matchup with Ohio State on Jan. 2.

Witcher made three 3-pointers among his season-high six field goals and his 15 points were his most in seven games.

“It was really good to see our guys finding him in the first half. He’s shooting the ball at a really high clip, especially this last half of the season,” Hoiberg said. “When C.J. has got an open shot, I think everybody in that locker room thinks that thing is going in.”

In the first meeting between the teams, Branham scored 35 points, a program record for points by a freshman in a Big Ten game.

Bryce McGowens, who leads Big Ten freshmen in scoring while Branham is No. 2, had the edge Tuesday. He was 8 of 15 from the floor while Branham was 5 of 11 and fouled out with 25 seconds left.

“Having a chance to come out and compete, everybody steps on the floor to win,” McGowens said. “I thank the coach, thank the team for coming out and competing every day. The rest will take care of itself.”

Zed Key, who started the previous 13 games for the Buckeyes, was unavailable because of an ankle injury.

Kyle Young, who started in Key’s place, missed the second half due to illness. Ohio State already is without Seth Towns for the remainder of the season as he rehabilitates a back injury.

“This is the worst season of injuries I’ve ever had,” Holtmann said. “I thought last year was bad, and this has been, now, worse with some of our season-ending injuries.”

Nebraska: At No. 10 Wisconsin on Sunday.