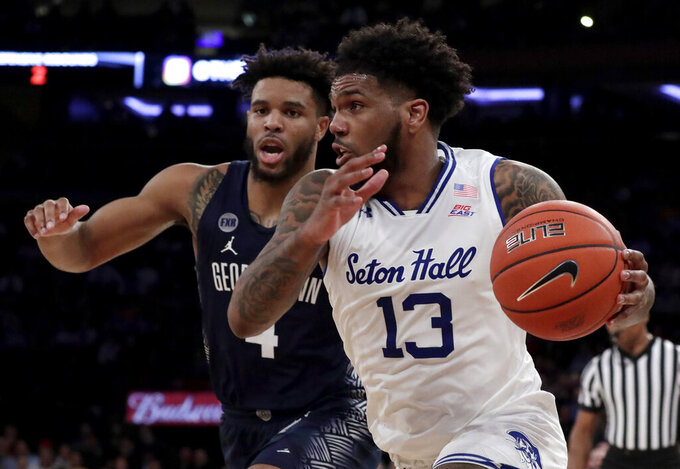 NEW YORK (AP) — Myles Powell was working the crowd and working over Georgetown in a rousing first half at Madison Square Garden.

Powell scored 29 points in the first half to set a Big East Tournament record and lead Seton Hall to a 73-57 victory against Georgetown in the quarterfinals Thursday night.

The Pirates brought plenty of fans from New Jersey with them to Manhattan, and Powell had them partying.

The third-seeded Pirates (19-12) will face No. 2 seed Marquette in the second game of the semifinal doubleheader Friday night. Seton Hall ended the regular season with consecutive victories against Marquette and Villanova and now seems safely in the NCAA Tournament field no matter what else happens this weekend.

James Akinjo, the Big East freshman of the year, scored 15 to lead the sixth-seeded Hoyas (19-13), who likely slipped off the bubble and out of contention for an NCAA bid.

Powell was hitting from everywhere in the first half, driving hard to the basket and launching from long range. He scored 13 straight points for the Pirates to close the half, dropping three 3s and mixing in an end-to-end drive for a layup.

"I know my guys feed off my energy and my coach looked at me and said, 'I need you to pick it up,'" Powell said.

Georgetown coach Patrick Ewing said the Hoyas tried to come up with different ways to slow down the stocky, 6-foot-2 guard.

"It didn't work," Ewing said. "He got hot in the first half, and everything he shot, he made."

The last 3 Powell made was a heat-check from about 24-feet in transition that had the junior from Trenton, New Jersey, mugging for the crowd.

"This is going to sound crazy. That's what we see every day," Seton Hall coach Kevin Willard said. "Anytime he steps on the floor I expect to see that. It was just Myles being Myles."

Powell broke the conference tournament record of 27 points in the first half by Doug McDermott of Creighton against DePaul in 2014, and recorded his eighth 30-plus game of the season. Powell has been especially good lately, averaging 29 with three 30-plus games in his last five.

"It just fires us up," Sandro Mamukelashvili said. "Every time I see Myles playing like that I want to play like that, too. Because he's balling out, we get confidence."

The Pirates turned 10 Georgetown turnovers into 20 first-half points and led 53-28 at the break.

"Unforced turnovers hurt us," Ewing said. "It's hard to overcome."

Powell scored Seton Hall's first bucket of the second half, but that was that. He and the Pirates cooled off from there. After going 10 for 14 from the field and 4 for 7 from long range in the first half, Powell finished 11 for 21 from the floor. He was three points shy of the Seton Hall record for a Big East Tournament game of 34 points by John Leahy in 1995 against Boston College.

The Hoyas never got closer than 14 in a lackluster second half.

Georgetown: Mac McLung, Akinjo's fellow freshman guard, finished with nine points on 3-of-8 shooting. He had three turnovers and looked out of sorts like most of the Hoyas.

"Akinjo is so talented, McClung, and they play with so much emotion when they're making shots," Willard said. "The biggest thing for us is to get them to try to stop and think, be aggressive with them, and just keep them off balance."

Seton Hall: While Powell was dominating on the perimeter, Mamukelashvili and Michael Nzei were doing a good job in the paint for the Pirates. The 6-foot-10 Mamukelashvili had 12 points and 10 rebounds and the 6-8 Nzei added seven and eight.

Georgetown: The NIT awaits the Hoyas.

Seton Hall: The Pirates split with the Marquette during the regular season.