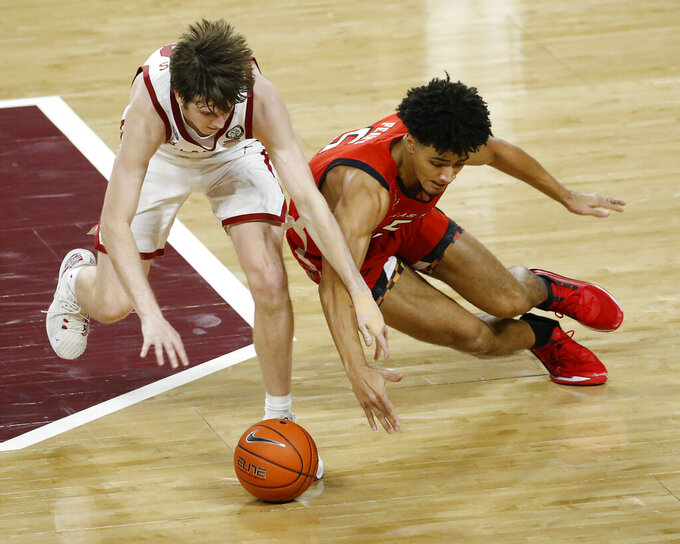 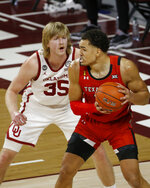 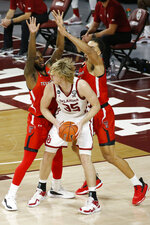 With some grit and a little luck, the Red Raiders avoided that fate. Terrence Shannon Jr. scored 21 points and Marcus Santos-Silva had 18 to help No. 15 Texas Tech hold off Oklahoma 69-67 on Tuesday night.

The game came down to the final seconds.

One of the misses was a bank shot by Reaves that was not difficult by his standards. He bent over frustrated after the buzzer.

“We had a great look,” Harmon said. “You can’t ask for a better look. Tough one, but we’re going to bounce back.”

Harmon scored 17 points and Reaves added 13 for Oklahoma (5-2, 1-1), which made just 17 of 27 free throws. Brady Manek, Oklahoma’s leading scorer this season, finished with two points on 1-for-7 shooting.

Georgetown transfer Mac McClung scored 16 points for Tech (7-2, 1-1 Big 12), which was coming off a one-point home loss to Kansas.

“I told the guys after the game that this might be one of my favorite wins of my coaching career,” Texas Tech coach Chris Beard said. "I was disappointed after that Kansas loss. I could have coached better, we could have played better, guys could have stayed out of foul trouble.”

Texas Tech led for most of the first half. Oklahoma closed within 31-30 before the Red Raiders went on a 10-0 run, highlighted by a 3-pointer and a two-point jumper by Nimari Burnett. Reaves made a layup in the closing seconds of the first half, but Texas Tech still led 40-32 at the break.

Santos-Silva scored 12 points in the first half and Shannon added 10 for the Red Raiders, who shot 59% before the break. Oklahoma's Manek scored two points on 1-for-6 shooting in the first half.

Santos-Silva and Shannon fouled out 21 seconds apart late in the game, giving the Sooners hope.

Oklahoma's Umoja Gibson hit a 3-pointer to cut the lead to two with 48 seconds remaining and bring the limited, socially distanced crowd to its feet.

McClung sliced through Oklahoma's defense for a layup to push the lead to four with 30 seconds remaining. Harmon's layup for Oklahoma trimmed Texas Tech's lead to 65-63 with 15.7 seconds to go.

The Sooners fouled McClung with 13.7 seconds left, and he drained two free throws.

Reaves' 3-pointer with 6 seconds left cut Texas Tech's lead to one, but McClung quickly made two more free throws on the other end to push the margin back to three and set up the final sequence.

Beard said he'd focus on the Red Raiders getting a critical win on the road, rather than the mistakes that nearly cost them in the final seconds.

Texas Tech: It was a critical victory for the Red Raiders, who avoided falling to 0-2 in conference play with a talented Oklahoma State team next up.

Oklahoma: The Sooners could have used the win — it was the first of four straight games scheduled against Top 15 teams.

Beard, on not blocking out in the final seconds: “We’re obviously disappointed in that last play. That’s something we work on all the time. There’s no excuse. We didn’t make the play.”

“I think Mac’s got courage,” Beard said. “He’s a guy out there playing to win. He did a great job finishing the game tonight, especially from the free-throw line.”