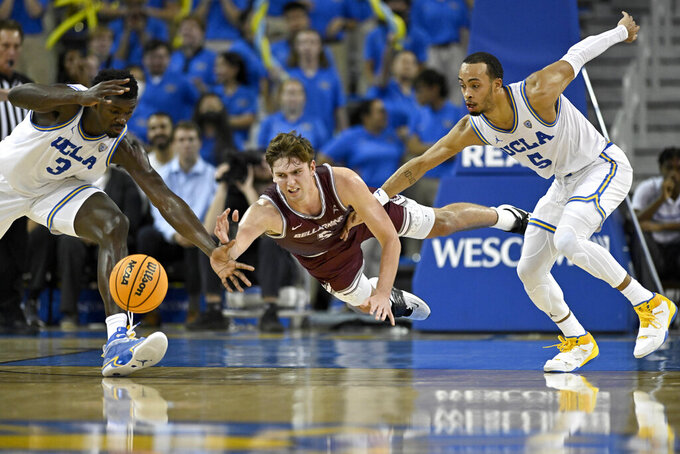 Clark sat out for the first time this season because of a non-COVID-19 illness. The junior is averaging 15.7 points and 7.7 rebounds. Coach Mick Cronin said Clark was feeling “horrendous” with flu-like symptoms.

Freshman Adem Bona had 16 points on 6-of-7 shooting from the field in his highest scoring game so far. The Bruins shot 61% from the floor and had 26 assists.

“We got a lot of guys who can score, but we got to understand the more we move the ball, the more easy buckets we're allowed to get,” said Tyger Campbell, who had 10 points and 10 assists.

Cronin added, “If we would ever pass the ball and continue to get 26 assists, we’ll continue to shoot 61%.”

Bellarmine made 11 3-pointers on 32 attempts, both season highs. Hopf had four 3-pointers in the team's fourth consecutive loss.

“All five of their guys run around like Steph Curry, try to get open, try to backcut, try to shoot,” Jaquez said. “That’s very hard to guard. It’s just so much movement.”

The Bruins (5-2) stretched their lead to 20 points in the second half. Jaquez scored six of their first nine points, with freshman Amari Bailey and Jaquez dunking back-to-back. Bailey finished with 12 points.

Led by Hopf, the Knights closed to 60-50. He sank three straight 3-pointers, Johnson scored and Hopf made a layup.

The Bruins answered with seven straight points. Campbell scored five in a row and Bona dunked.

The highlight play of the game came in the first half. After sinking a pair of free throws, Campbell stole the ball and sent an alley-oop pass to a streaking Bona, who dunked.

“It was amazing,” Bona said “I’ve been waiting for that all year.”

Johnson and Garrett Tipton combined to score 18 of Bellarmine's 27 points in the first half.

Singleton, who started in Clark's place, hit a 3-pointer that sent the Bruins into halftime leading 43-27.

Juston Betz didn’t start for Bellarmine for the first time this season. He had two points and four fouls in a 21-point loss at Loyola Marymount on Friday.

WESTBROOK IN THE HOUSE

Former Bruin and current Laker Russell Westbrook sat courtside with his 4-year-old son, Noah. Westbrook took part in the T-shirt toss during a timeout and then unraveled one of the shirts and playfully draped it over his son’s head.

Bellarmine: The Knights are close to wrapping up a nine-day, 5,633-mile stretch of road games against No. 8 Duke, Loyola Marymount, No. 19 UCLA and No. 15 Kentucky. A year ago, they tested themselves in similar fashion with games at Purdue, Gonzaga and UCLA, all of which were ranked No. 1 in that month. “As a friend, he needs to evaluate his scheduling,” Cronin joked about coach Scott Davenport. “But look how hard his kids played.”

UCLA: The Bruins lost to ranked Illinois and Baylor last week in Las Vegas, their first time playing ranked opponents in consecutive games since the 2021 NCAA Tournament. They potentially will have another back-to-back against ranked opponents next month, playing at Maryland and against Kentucky in New York within a four-day span. Last season, the Bruins lost in back-to-back games just once and never dropped three in a row.

Bellarmine: At No. 15 Kentucky on Tuesday. The Knights beat Louisville by one point in their season opener.