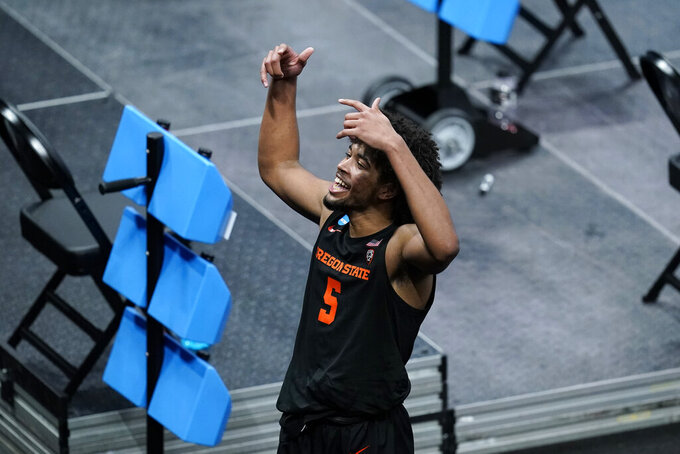 Add Oregon State to the relatively short list of double-digit seeds that have reached a regional final in the NCAA Tournament.

The Beavers became the 18th team seeded 10th or lower to reach the Elite Eight since the field expanded to 64 teams in 1985 when they beat Loyola Chicago 65-58 on Saturday. Coach Wayne Tinkle's team is the second No. 12 seed to make a regional final, joining Missouri in 2002. Those Tigers ended up losing to No. 2 seed Oklahoma.

“It’s an amazing feeling to be just part of the success, really,” Oregon State star Ethan Thompson said. “Beaver Nation has waited a long time. And when coach Tinkle and the rest of the coaching staff got here, this was the goal in mind to turn it into successful basketball. And we’re here now. So it’s just been a great feeling and extremely blessed to be a part of it.”

No team seeded worse than 12th has made the Elite Eight, but No. 15 seed Oral Roberts made a strong bid for history later Saturday. The Golden Eagles led No. 3 seed Arkansas by double digits in the second half, but the Razorbacks rallied to win 72-70.

Other double-digit seeds to reach the Elite Eight include Davidson in 2008 as a No. 10 seed led by Stephen Curry; Gonzaga in 1999 as a No. 10 seed that started its run of 22 straight tournament appearances; and Loyola Marymount as a No. 11 seed in 1990 following the death of star Hank Gathers.

Oregon State’s victory ensured the conference will have at least two teams in the regional finals. No. 11 seed UCLA would become the second of three Pac-12 representatives if its beats No. 2 Alabama in the East Region on Sunday. The final Sweet 16 game of the weekend is an all-Pac-12 matchup: Sixth-seeded USC against No. 7 seed Oregon in the West Region.

“Our whole league, Pac-12, we’ve been trying to tell you guys in the media for the last couple years the Pac-12 is really good,” USC coach Andy Enfield said. “Last year was exceptional. This year, the same.”

The last time the Pac-12 had at least two teams in the Elite Eight was 2007, when both UCLA and Oregon made it. The conference had three teams — Arizona, Stanford and USC — reach the regional finals in 2001.

One more made free throw would have given Oral Roberts the record.

Top-seeded Gonzaga is entirely focused its matchup Sunday with No. 5 seed Creighton in the West Region semifinals.

But the Bulldogs already have a win over Creighton this week, and continued to get good news about their future.

The Zags landed another elite recruit when five-star guard Hunter Sallis of Omaha, Nebraska, announced his verbal commitment to the program on Friday. The 6-foot-5 Sallis — rated among the top 10 recruits in the country — is the highest-rated recruit in program history, topping this year’s freshman star Jalen Suggs.

Sallis had narrowed his choices to Gonzaga, North Carolina and his hometown school, Creighton, before committing to the Bulldogs. And he should have a chance to contribute immediately with the graduation of leading scorer Corey Kispert and the expected departure of Suggs for the NBA.

The Bulldogs might not be done. They appear to be the favorite to land 7-footer Chet Holmgren, the No. 1 recruit in the country. Holmgren was a high school teammate of Suggs in Minneapolis.

The atmosphere in and around Hinkle Fieldhouse certainly felt more like normal on Saturday.

A few blocks away, Butler students gathered on the green grass to celebrate a warm, sunny day — and their favorite sport. A restaurant across the street hosted dozens of customers and inside the historic arena, hundreds dressed in the colors of Baylor or Villanova while some clad in Butler gear danced.

“First time all year it seemed like a real game,” Villanova coach Jay Wright said. “The crowd was awesome.”