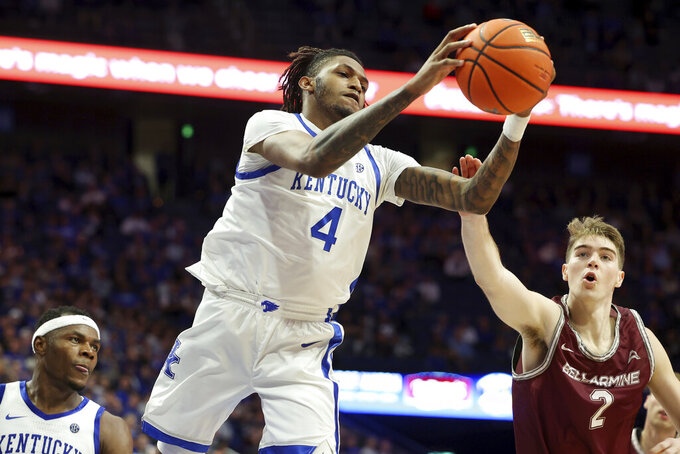 Kentucky's Daimion Collins (4) pulls down a rebound next to Bellarmine's Alec Pfriem (2) during the second half of an NCAA college basketball game in Lexington, Ky., Tuesday, Nov. 29, 2022. (AP Photo/James Crisp)

Jacob Toppin had 12 points and CJ Fredrick finished with 11 as the Wildcats (5-2) overcame a slow start.

Bellarmine, which defeated Louisville 67-66 it its season opener on Nov. 9, wasn’t intimidated in its first meeting with the Wildcats and controlled the tempo until Kentucky wore down the Knights in the final 14 minutes.

“That's a hard game to play,” Kentucky coach John Calipari said. “We had guys cramping up (in the locker room). ... We worked three days (on) how we finish off the game. ... We went to our grind it stuff (in the second half), which we had worked and in some games, you've got to do it."

Trailing 32-28 with 15 minutes left, Kentucky used a 23-3 run to pull away. Fredrick and Toppin combined for 16 points during the decisive spurt.

Reeves said the Wildcats were surprised by the Knights' ability to control the pace in the first half, which resulted in a 21-21 deadlock at the break.

“They definitely move the ball with all the cuts they do and it’s definitely difficult to guard, and they go deep into the shot clock,” Reeves said. “Not many teams do that and we tried to do what they were doing a little bit and try to grind it out, so we could do the same thing they were doing to us.”

The Wildcats will take their longest trip of the season — across the Atlantic — when they play Michigan in London in the Basketball Hall of Fame London Showcase on Sunday. The game was originally scheduled for 2020 but was postponed because of the COVID-19 pandemic. Kentucky will be playing its third regular-season game outside the United States and its first in Europe.

“It will a great experience for these kids, really hard game,” Calipari said. “We better not play how we started this game. ... When you're doing what I'm doing, you're trying to put these kids in different situations, where they learn and grow.”

Bellarmine: The Knights completed a six-game trip that included games at Clemson, No. 17 Duke and No. 21 UCLA. Bellarmine played at Cameron Indoor Stadium, Pauley Pavilion and Rupp Arena in the same season for the first time. Bellarmine, which traveled 5,633 miles in nine days, closes out the calendar year with five home games, including four in a row during the next two weeks.

“To have us here, this is incredible,” coach Scotty Davenport said. “These young men will never forget this experience for the rest of their lives. Nine days — Cameron, Pauley, Rupp Arena, that’s Bellarmine University. People say why? Because that’s what I believe a program is about.”

Kentucky: The Wildcats had a size advantage over the Knights but managed just four blocks, two in each half. Kentucky came into the game averaging seven blocks per game, second nationally behind Southeastern Conference rival Auburn, which is averaging 8.3 blocks through its first seven games. Kentucky finished with 16 assists after managing six in the first half. The Wildcats came in averaging 19.7 assists per game, seventh in the nation.