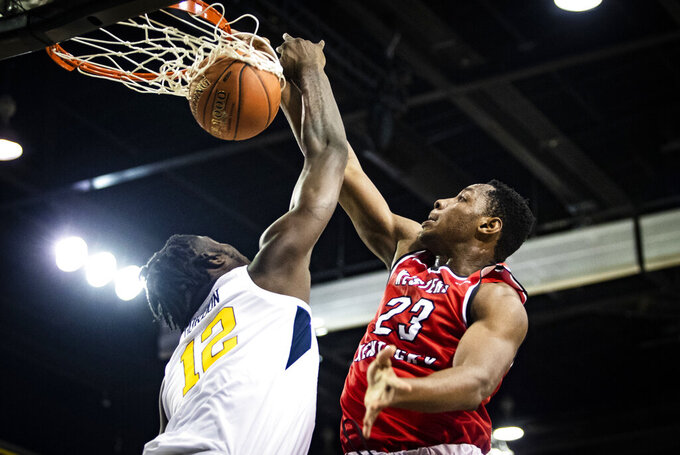 FILE - In this Nov. 16, 2018, file photo, Western Kentucky center Charles Bassey (23) dunks over West Virginia Mountaineers forward Andrew Gordon (12) an NCAA college basketball game at the Myrtle Beach Invitational in Conway, S.C. Bassey enters this season as one of the top pro prospects from any college that isn’t in a major conference or in the preseason Top 25. (Austin Anthony/Daily News via AP, File) 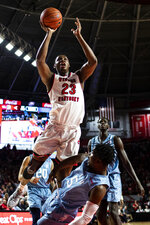 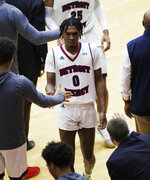 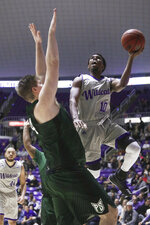 Ja Morant provided an inspiration to all small-conference players when he earned All-America honors at Murray State last season and went to the Memphis Grizzlies with the second overall pick in the NBA Draft.

There doesn't appear to be anyone of Morant's caliber in the mid-major and low-major ranks this season, but there remain plenty of productive performers and pro prospects from outside the largest conferences.

Western Kentucky center Charles Bassey was having a productive freshman season last year while watching Morant rise to stardom about 100 miles away. Bassey enters this season as one of the top pro prospects from any college that isn't in a major conference or in the preseason Top 25 .

"Guys that go to smaller schools still get drafted," the 6-foot-11 sophomore said. "It's not about the school. The school doesn't get you drafted. You get yourself drafted by the way you play and stuff like that."

Although he plays outside the major conferences, Bassey isn't exactly a sleeper.

He's rated the nation's No. 6 overall prospect in his high school class, according to composite rankings of recruiting sites compiled by 247Sports. Bassey is the rare five-star prospect to sign with a mid-major program. He plays for a Western Kentucky staff that includes his legal guardian, Hennssy Auriantal, as an assistant coach.

He entered his name into the draft after his freshman season before opting to stay in school. Bassey said the pre-draft process helped him realize what he needs to make himself a better prospect.

That included improving his post moves and his shooting. Bassey was reminded about the importance of playing hard at all times and not taking any plays off.

Bassey was working his way back from a knee injury early last season and played with a brace on his right knee for much of Western Kentucky's nonconference schedule.

But he still averaged 14.6 points, 10 rebounds and 2.4 blocks while helping Western Kentucky go 20-14. He was one of five finalists for the Kareem Abdul-Jabbar Award given to the nation's top college center.

He's eager to do more this season as he tries to help Western Kentucky earn its first NCAA Tournament bid since 2013. Western Kentucky received 13 of 14 first-place votes in a Conference USA preseason poll conducted by the league's coaches.

Here's a rundown of some other players to know from non-Top 25 teams in mid-major or low-major conferences.

Notes: As a redshirt freshman last year, Diane earned honorable mention on the Associated Press All-America team and made 340 baskets to lead all Division I players. Diane ranked sixth in Division I in both scoring (24.8) and rebounding (11.2). Diane also had 2.2 blocks per game.

Notes: Harding averaged 21.4 points last season after collecting 22 points per game two years ago. He has earned first-team all-Big Sky honors each of those years. Harding led the Big Sky with his .870 free-throw percentage last season.

Notes: Marrow ranked eighth among all Division I players in scoring (24.4) last season and also averaged 4.9 assists, 4.1 rebounds and 1.6 steals. He also set school single-season records for free throws made (218) and attempted (269). As a sophomore, Marrow averaged 19.1 points.