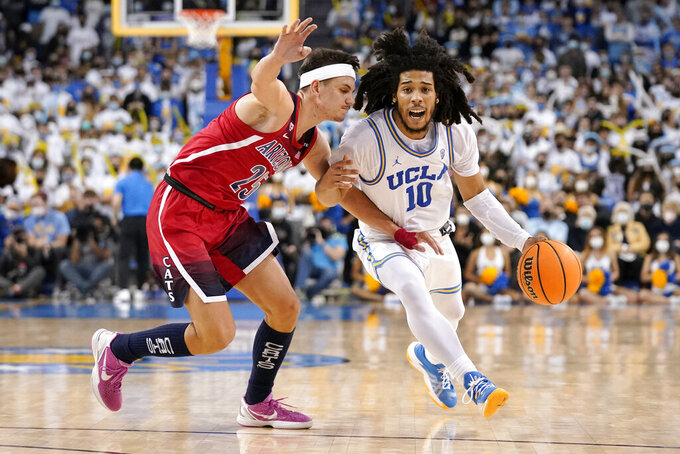 GAME OF THE WEEK: Arizona State at No. 3 Arizona, Saturday. The Wildcats (16-1, 6-0 Pac-12) lost 75-59 to No. 7 UCLA on Tuesday night, but have one of the nation's best offenses — leading in assists per game (21.3) and second in scoring (88.7 points). The Sun Devils (6-11, 2-5) are coming off a blowout loss to No. 15 Southern Cal, but didn't have coach Bobby Hurley or guard Jay Heath after they were suspended for confronting officials after a loss to Stanford. Winning at McKale Center against its biggest rival could go a long way to Arizona State turning around its season.

LOOKING AHEAD: The Pac-12 has two more rival games in the next week. On Saturday, Oregon State plays at Oregon in a matchup of teams going in opposite directions. The Ducks usually round into form late in the season under coach Dana Altman, and that's been the case this year. Oregon (12-6, 5-2) has won six straight, including top-5 UCLA and USC in consecutive games. The Beavers (3-14, 1-6) have labored coming off last season's Elite Eight appearance, losing four straight and 14 of 16. California and Stanford renew their rivalry next Tuesday. The Cardinal (11-6, 4-3) have been inconsistent, but have wins over USC and Oregon. The Bears (9-10, 2-6) have lost five straight and have a difficult week before playing the Cardinal, facing UCLA and USC this week.

PLAYER TO WATCH: Johnny Juzang, UCLA. The Bruins' junior guard had quite a week, averaging 25.5 points on 58% shooting, including 4 of 7 from 3 in a sweep of the Pac-12 mountain schools. He was named Pac-12 player of the week for the second time this season.

ON THE WOMEN’S SIDE: There will be a rematch of the 2021 national championship game when No. 8 Arizona faces No. 2 Stanford on Sunday. The Wildcats, who missed a last-second shot in the title game, have won two lopsided games since a contentious loss at No. 19 Oregon on Jan. 15. The Cardinal have won six straight since a four-point loss to No. 1 South Carolina on Dec. 21. Arizona plays at UCLA on Wednesday and Stanford faces Arizona State Friday before the top-10 showdown.