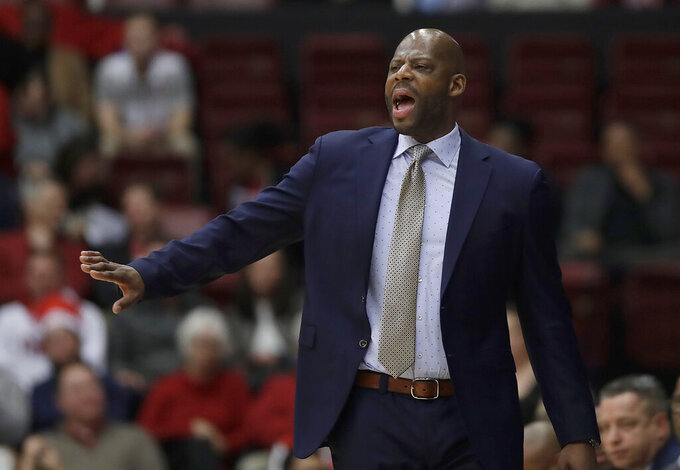 FILE - In this March 7, 2019, file photo, California coach Wyking Jones gestures during the first half of his team's NCAA college basketball game against Stanford in Stanford, Calif. California fired Jones after winning just eight games in each of his first two seasons. (AP Photo/Jeff Chiu, File)

BERKELEY, Calif. (AP) — California expects its men's basketball program to return to winning at the highest level soon, and plans to find the right coach to lead that comeback.

The university fired basketball coach Wyking Jones on Sunday after Cal won just eight games in each of his first two seasons.

Athletic director Jim Knowlton announced the decision days after reports emerged that Jones had been told he would return to Cal for a third season. Knowlton met with Cal's players last week and then told Jones on Sunday.

Cal has hired a search firm to find its next head coach "ASAP," Knowlton said, and he also has already formed his own short list of candidates he would like to bring in for interviews. Assistant Marty Wilson has agreed to serve as interim coach while the rest of the staff is under contract and Knowlton will let the next coach decide on who might be retained.

"At a school with the reputation and the academic acumen that Cal has, we need a teacher at heart," Knowlton said on a conference call.

"We need somebody who is going to teach our young men and help them grow. We need a leader, a program-builder, someone who is going to be able to really assess where we are now and have the vision to look at what we can become, and we know we can become something special. We've been there before. He's going to have a commitment to winning at the elite level and we have to do it the right way. Here at Cal we demand that we do it the right way."

Knowlton thanked Jones for his giving it "100 percent every day" in his dedication to the program and called the firing a difficult decision, crediting Jones for doing "so many things well," such as "connecting with our student-athletes and really helping them in all parts of their lives, in the academic arena and growing as young men and certainly as basketball players." Jones had three years remaining on a five-year, $5 million contract.

Some supporters and alums urged Knowlton to give Jones one more season, but in the end Knowlton said "I have to make good decisions for our program."

Thanks to generous donor support, Knowlton expects to be able to pursue a top-tier coach, saying, "We're going to go out and find the right coach for Cal." He also will tell candidates Cal is working to build a practice facility.

"As always, we were guided by the best interests of our student-athletes, as well as the values and objectives of Cal athletics and our university. As we quickly turn toward our search for a new head coach for our men's basketball program, I am certain that we will attract a strong, talented and highly qualified pool of candidates. I am confident that we will find someone who will help lead us on a path to being exceptional."

Jones had a 16-47 record during his time at Cal. The Golden Bears followed up a school-record 16-game losing streak by winning the final three regular-season games this season.

Jones won just five conference games in his two seasons at Cal, finishing last in the Pac-12 both years. Attendance fell significantly this year as fans and students grew frustrated with the direction of the program that has made one trip to the NCAA Tournament the past six years.

Cuonzo Martin lost in the first round to Hawaii in 2016, the second of his three years at Cal before leaving for Missouri. Jones was an assistant on that staff and ultimately got the head coaching job.

Knowlton will begin a search for a replacement with former Cal star Jason Kidd, UC Irvine coach Russell Turner and Nevada coach Eric Musselman expected to be among the candidates.

Musselman and Turner have been candidates at Cal in the past.