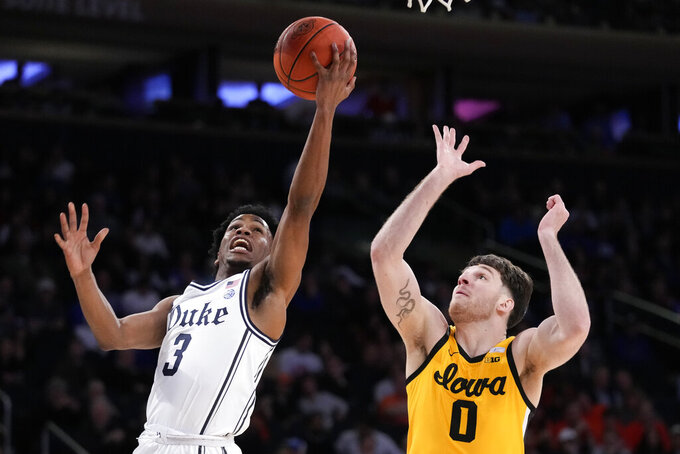 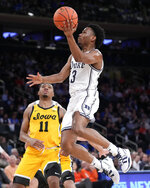 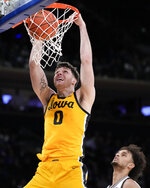 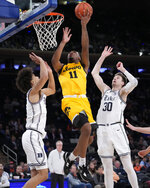 NEW YORK (AP) — Jeremy Roach tied a career high with 22 points and No. 15 Duke led virtually the entire way in a 74-62 victory over Iowa on Tuesday night in the Jimmy V Classic at Madison Square Garden.

With cancer survivor Dick Vitale calling the game for ESPN, the Blue Devils (9-2) won their third straight since a 19-point loss to Purdue last month in the championship game of the Phil Knight Legacy.

Roach entered 10 of 29 from the floor in his past three games since scoring 21 points against Xavier on Nov. 25. He helped Duke improve to 4-0 in this event by shooting 8 for 18 and making three of the team’s seven 3-pointers.

“I probably would say I knew I was in rhythm when I made my first 3,” Roach said.

Mark Mitchell added 13 of his 17 points in the second half. Kyle Filipowski had 12 points and 10 rebounds for his sixth double-double, and Ryan Young grabbed 11 boards to help the Blue Devils outrebound Iowa 45-35.

Duke held an opponent under 65 points for the eighth time and did it against an opponent that came in averaging 86.4 points per game.

“The defense is the base of who we are,” first-year Blue Devils coach Jon Scheyer said. “When I found out I was going to be the head coach at Duke, two things are connected to Duke basketball: playing defense and sharing the ball. We’ll continue to emphasize that, but just proud of the effort.

“It’s exciting because for this young of a group and a young team in terms of having that (little) experience playing together, that’s what it comes down to in March — you need to get stops. And I think our offense will continue to develop through the course of the season."

Patrick McCaffery led the Hawkeyes (6-2) with 12 points in a game that had special meaning to him. The junior forward was 13 when he was diagnosed with cancer of the thyroid, the small gland at the base of the front of the neck that regulates a person’s metabolism.

The son of Iowa coach Fran McCaffery had two operations in 2014, and his grueling follow-up treatment included taking two radioactive iodine pills to eliminate any possible remaining cancer cells from his lymph nodes.

Three months after his diagnosis, he was declared cancer-free.

Iowa-Duke was the second game of the Jimmy V Classic doubleheader for cancer research. In the opener, No. 17 Illinois outlasted No. 2 Texas in overtime.

“It’s a tremendous honor in so many ways,” Fran McCaffery said. “The work that ESPN has done with Dick Vitale in particular is unprecedented and has impacted so many lives, not the least of which was our family. So, it’s an honor to participate."

Dasonte Bowen also had 12 points and Filip Rebraca added 10, but the Hawkeyes rarely developed a consistent flow on offense as leading scorer Kris Murray was held to eight on 3-of-9 shooting. Murray entered Iowa’s first game against a ranked opponent averaging 21 points after scoring a career-high 31 last week against Georgia Tech.

“Every time I drove it, they showed multiple defenders,” Murray said.

Iowa: Struggling inside and outside, the Hawkeyes shot 40%. They went 3 for 16 from 3-point range and also missed 12 layups.

Duke: It was a new role but a familiar setting for Scheyer. During his time as a player and assistant coach, Scheyer went 19-5 at MSG. In the final minute, several Blue Devils fans began chanting, “Our House! Our House!”

“This has been a special place for us to play over the years and we’re going to try to come back here like we’ve done in our program’s history,” Scheyer said. “This is a special spot.”

Iowa faces a quick turnaround, hosting No. 20 Iowa State on Thursday and then Wisconsin in the Hawkeyes’ Big Ten opener Sunday.