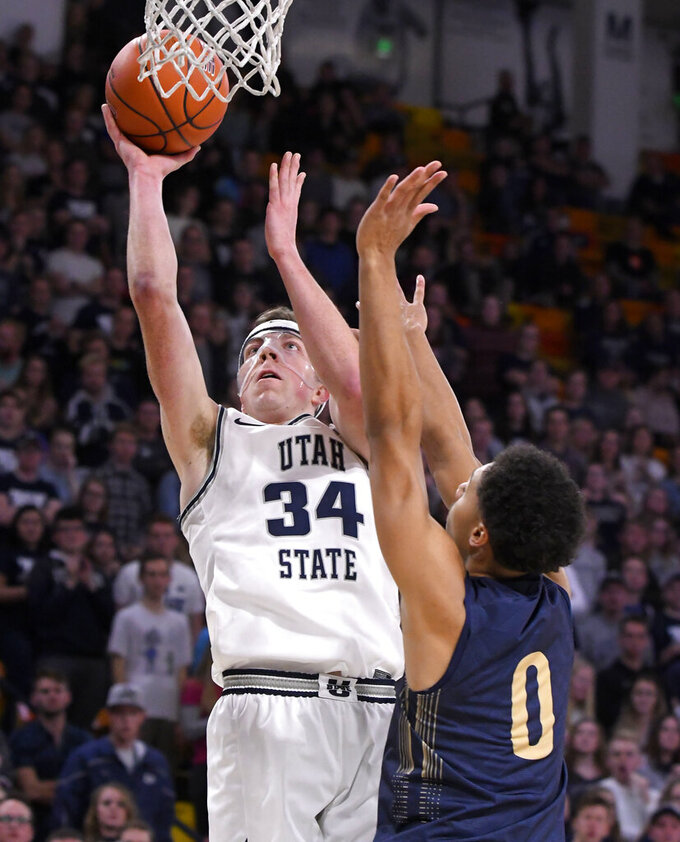 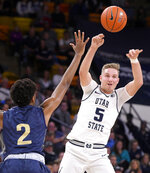 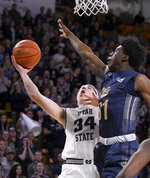 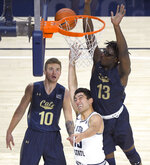 LOGAN, Utah (AP) — Shots weren't falling for Utah State guard Sam Merrill before halftime, so he found another way over the final 20 minutes.

Merrill scored 28 points and went 17-of-18 from the free-throw line to help 17th-ranked Aggies beat Montana State 81-73 Tuesday night in the season opener for both teams.

Those 17 free throws tied a school record. Merrill made one more foul shot by himself than the entire Montana State team.

"The first half, I didn't play bad. Offensively, I wasn't really getting what I would have liked," Merrill said. "I wanted to come out and be aggressive in that second half. Fortunately, I was finally able to find some space and make some shots."

Alphonso Anderson and Justin Bean each added 13 points for the Aggies. Utah State overcame 37.7% shooting from the field.

Harald Frey led Montana State with 34 points on 10-of-20 shooting. His sharp aim helped the Bobcats give the Aggies all they could handle for 40 minutes.

"We can go as far as we want to," Frey said. "I've been in the Big Sky Conference for what seems like 10 years now, and I think we have all the pieces necessary to go through March Madness and go to the (NCAA) Tournament."

The Bobcats had 15 turnovers, leading to 14 points for Utah State.

Montana State cut it to three on a three-point play from Finn Fleute, but Brock Miller answered with a corner 3 with 30 seconds left.

Utah State could not find consistency on offense before halftime. The Aggies missed their final eight shots of the first half and went almost seven minutes without a basket.

It opened the door for Montana State to rally.

Frey pulled the Bobcats within one when he made three straight 3-pointers and followed with a three-point play to cut Utah State's lead to 49-48. The Bobcats took a 55-54 lead on Michael Paulo's layup with 10:09 left.

Frey's layup with 5:25 remaining gave Montana State a 66-64 lead before the Aggies answered with their 10-0 run to pull ahead for good.

"Against Utah State you have to make shots," Bobcats coach Danny Sprinkle said. "They really guard the basketball and shrink the floor, obviously at a high level. They're one of the best defensive teams in the country."

Utah State won its season opener for the 24th time in 26 seasons. The Aggies also handled their newfound status as an AP Top 25 team well. They improved to 57-18 all-time as a ranked team.

Merrill scored in double figures for the 24th straight game. He also notched his 28th career game with at least 20 points. Merrill has scored 10 or more points in 78 career games, tying Nate Harris for eighth most double-digit scoring games at Utah State.

Montana State: The Bobcats successfully attacked on the perimeter for the better part of 40 minutes to give themselves a chance at pulling an upset. Montana State shot 9 of 19 from the perimeter. Frey accounted for six of those outside baskets.

Utah State: Sophomore center Neemias Queta, who is still rehabbing a knee injury he suffered in July, did not play for the Aggies. Kuba Karwowski filled in and provided one of the game's biggest defensive highlights when he blocked three straight shots over the final three seconds before halftime.