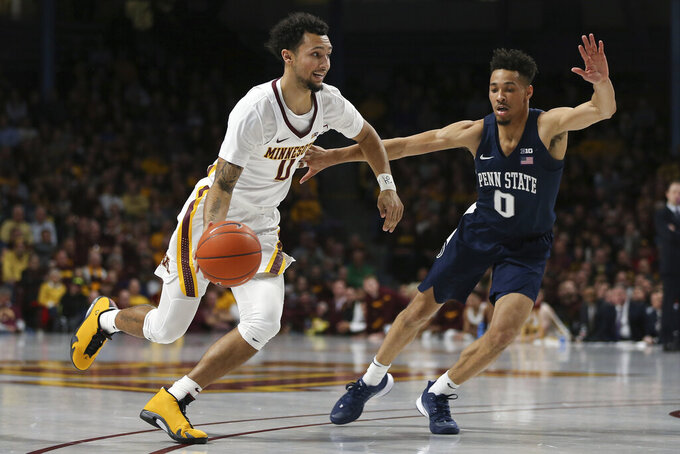 MINNEAPOLIS (AP) — Daniel Oturu had his 12th double-double of the season with 26 points and 14 rebounds, Marcus Carr added 27 points and Minnesota came from behind to beat Penn State 75-69 on Wednesday night.

Carr added nine assists and six rebounds for the Gophers, who trailed by eight points early in the second half before the Nittany Lions’ offense went cold. Penn State missed 13 straight shots at one point and went without a field goal for almost 12 minutes as Minnesota went on a 16-5 run.

Myreon Jones and Seth Lundy each had 15 points for the Nittany Lions, who have lost three in a row.

The Gophers beefed up their nonconference schedule this season to improve their tournament standing and prepare them for Big Ten play. The maneuver has paid off with Minnesota beating No. 19 Michigan on Sunday and outlasting Penn State, which was ranked before back-to-back losses to Rutgers and Wisconsin.

The Gophers also have beaten No. 21 Ohio State this season and lost in double overtime at Purdue.

With the Nittany Lions shooting over 60% from the field until their drought, Minnesota stayed close. Payton Willis tied the game on the opening possession of the second half before Penn State used a 10-2 run to take control with Lamar Stephens scoring six points during the stretch.

Stephens’ jumper at 17:02 of the second half ended the run and the Nittany Lions didn’t hit a field goal again until Myreon Jones connected with 5:28 to play.

In its previous two losses, Penn State shot a combined 39 of 113 for 34.5% against Rutgers and Wisconsin.

The Gophers were 23 of 29 from the free-throw line and outrebounded the Nittany Lions 48-32.

Penn State: Another conference loss for the Nittany Lions, who built a strong resume outside of the conference. Penn State is 2-4 in the Big Ten, perhaps the toughest conference in the country with 12 teams ranked in the top-50 of the NCAA Evaluation Tool (NET) rankings.

Minnesota: Another quality win added to the ledger for the Gophers. As Minnesota builds its NCAA tournament portfolio, Wednesday’s win currently counts as Quadrant 2 win in the NET rankings. It’s the second Quadrant 2 win this season to go along with Quadrant 1 wins against Ohio State and Michigan. The road doesn’t get any easier in the Big Ten, but the Gophers are battle tested as they go back on the road.

Penn State’s alternating January schedule has it back home against No. 21 Ohio State on Saturday. The Nittany Lions lost 106-74 at Ohio State in December.

Minnesota has a few days off before hitting the road at Rutgers on Sunday. The Gophers are winless in five road games this season, including losses in their first three Big Ten road games.