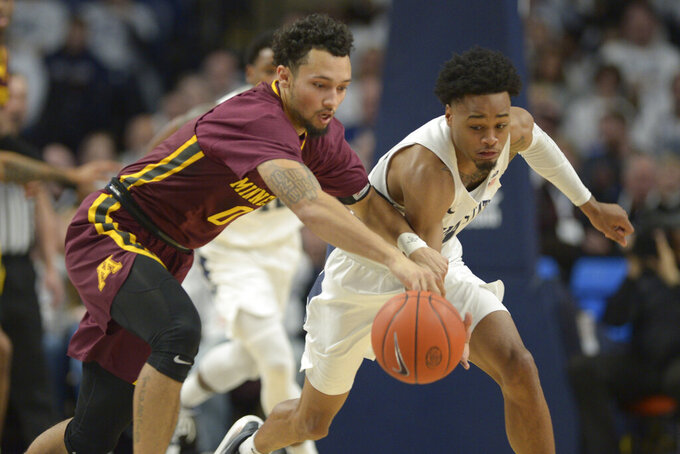 STATE COLLEGE, Pa. (AP) — Lamar Stevens was celebrated as an elite scorer and a published author on Saturday.

Penn State’s do-it-all forward, who wrote a children’s book that was distributed to fans before No. 22 Penn State’s game against Minnesota, is well on his way to authoring another story. Maybe one for the history books.

Stevens followed his pregame induction into Penn State’s 2,000-point club with a career-high 33 points to lead No. 22 Penn State over Minnesota 83-77. It was the Nittany Lions’ sixth-straight win and it came in front of their first sold-out crowd since 2011 — the last time they made the NCAA Tournament.

“Lamar had that look in his eye that a senior gets when he knows you’re running out of games and we’ve got to keep winning,” Penn State coach Patrick Chambers said. “He’s really playing both sides of the floor.”

Izaiah Brockington added 10 points for the Nittany Lions (18-5, 8-4 Big Ten) who stymied the Gophers in the waning minutes to snap a five-game losing streak in the series.

Daniel Oturu had a career high 32 points and grabbed 16 rebounds while Mike Carr added 20 points for the Golden Gophers (12-11, 6-7 Big Ten). Minnesota trailed by as many as 19 with 15:53 to play before Carr found his groove and nearly single-handedly erased Penn State’s lead.

The sophomore guard, who’d made just one basket to that point, drained 18 of Minnesota’s next 22 points in just over five minutes. The surge pulled the Gophers within eight with 10:21 left.

“For us, obviously a tale of two halves,” Minnesota coach Richard Pitino said. “Putting up 55 points in the second half versus a terrific defense was great.”

The Nittany Lions used an 11-4 run, scoring all their points inside the paint or from the foul line, to start the game.

Oturu scored the next six points to cut Penn State’s lead to 11-10 before the Nittany Lion offense got rolling again with back-to-back 3-pointers from Stevens and Myles Dread.

They sparked a 23-10 Penn State run into the half’s waning minutes where Brockington got loose on a fastbreak and finished with a left-handed dunk that put Penn State up by 14.

Oturu rolled in a layup before Stevens, just one of three Nittany Lions to reach 2,000 points, hit a pair of free throws to give Penn State a 36-22 lead at halftime.

Penn State had too many options for Minnesota to defend inside. The Nittany Lions put up 38 points in the paint.

“We got really, really stretched out,” Pitino said. “We got tired. Instead of providing great team defense, they were able to drive into the lane.”

Penn State students began filing into the Bryce Jordan Center nearly two hours before the opening tip where they planned a rude courtside welcome for Oturu.

Armed with caricature drawings of his face on one side and directions for their peers to “Boo No. 25” written on the other, students in the front row led the playful jeers.

Booed every time he touched the ball, Oturu even had to contend with a tough rim early. He started 1-for-5 before settling in. He earned their ire by dropping 26 points in a physical, chippy game in Minneapolis earlier this season where he and Stevens talked trash all night.

The two pro prospects shared a big hug after this one.

“I think it was just mutual respect at that point.”

Minnesota: The Gophers have struggled from 3-point range all season. They entered Saturday having made just 32% on the season and didn’t make a 3-pointer until a minute into the second half. Still, Carr’s gritty second-half effort gave them a shot when it appeared over early.

Penn State: The Nittany Lions are playing with confidence in every area of the court, particularly Stevens who played his best offensive game of the season.