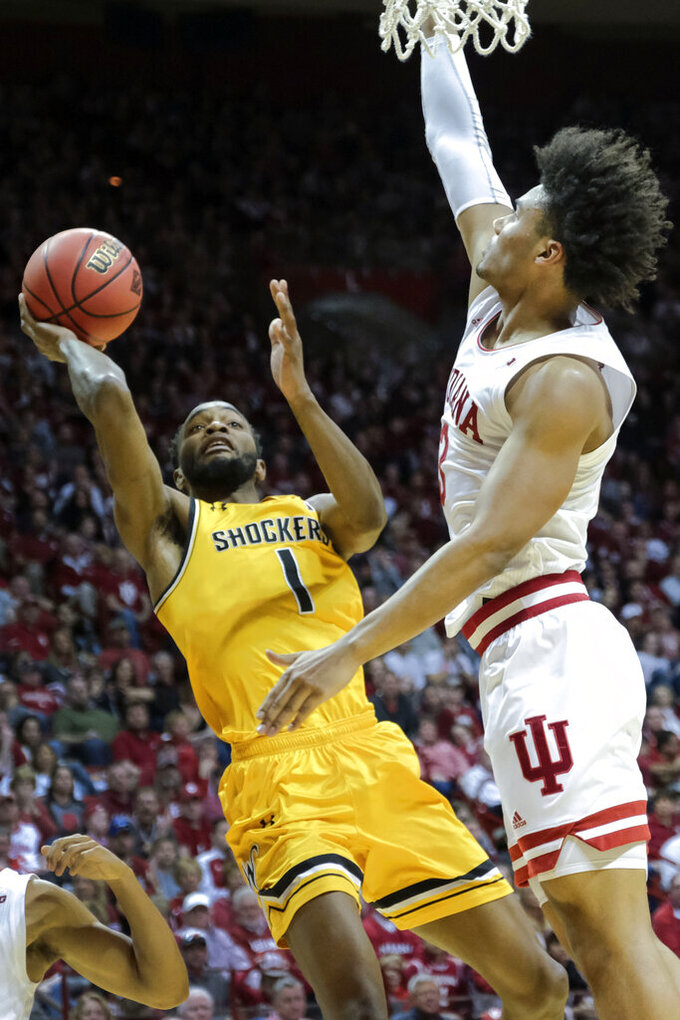 Wichita State forward Markis McDuffie (1) shoots in front of Indiana forward Justin Smith (3) in the first half of an NCAA college basketball game in the third round of the NIT tournament in Bloomington, Ind., Tuesday, March 26, 2019. (AP Photo/AJ Mast)

TCU has a date in Madison Square Garden and a championship it's trying to win.

But first, coach Jamie Dixon had to make a travel stop closer to his heart before he took the Horned Frogs to New York City for an NIT semifinal game against Texas.

The Horned Frogs practiced at West Point, New York, in part to honor Dixon's late sister, Maggie. Maggie Dixon died at age 28 from heart arrhythmia in April 2006. Just weeks before, she led Army to its first women's NCAA Tournament. The Maggie Dixon Classic was played this season on TCU's campus, and Jamie Dixon has found a way to keep his sister's legacy strong in college basketball.

He has his own chance to leave New York a winner, and the No. 1 seed Horned Frogs (23-13) can take the first step by defeating second-seeded Texas (19-16) for the third time this season. The Texas two-sweep was needed for Dixon's program, but a 7-11 mark overall against Big 12 Conference opponents during the regular season kept TCU out of the NCAA Tournament.

"Our guys are going to have to get through this disappointment and get ready to play," Dixon said when the NCAA Tournament bracket was announced. "I'm sure they will. They're competitors. The best way to get through it is to show you deserve it and go do something about it."

Fueled by the snub, the Horned Frogs stormed past Sam Houston State, Nebraska and Creighton to get the shot on Tuesday night at knocking off the Longhorns and playing for a title.

Dixon led the Horned Frogs to the NCAA Tournament last season, so while an NIT bid might seem like a step back, it's still postseason play for a program that has only eight appearances in the tourney. TCU's loss in the first-round last season was its first game as part of March Madness since 1998. TCU cracked the preseason AP Top 25 for the first time in two decades to open this season.

"I understand that we're talking about the NCAA Tournament and to have this kind of disappointment is not normal to Fort Worth or TCU," Dixon said. "But we had talked about being the team that got to the tournament two years in a row."

The winner of the state of Texas side of the bracket takes on the winner of fifth-seeded Wichita State vs. No. 6 Lipscomb in Thursday's championship game.

The Shockers (22-14) had a solid season under coach Gregg Marshall, six years after he led the program to the Final Four. The real one. The Shockers lost just about everybody from a team that won 25 games, including NBA pick Landry Shamet. They have certainly played at the highest level. They've been to seven consecutive NCAA Tournaments, winning at least 30 games four times. That includes a run to the Final Four in 2013 and a perfect regular season and No. 1 seed the following year, along with five Missouri Valley Conference titles and a second-place finish a year ago in their American Athletic Conference debut.

Marshall led the Shockers to the 2011 NIT championship, which kick-started the most successful era in program history. The Shockers made their own sensational run in the NIT, beating the No. 1, 2 and 3 seeds all on the road just to make it to New York.

"We honestly didn't know we'd make the NIT," Marshall said. "We had to really finish strong just to make the NIT. We've gotten better. They continue to work and to listen. We've been playing one-and-done basketball for the better part of the month."

They want to keep the run going against Lipscomb (28-7) and ASUN Conference Player of the Year Garrison Mathews. He has a whopping 2,429 career points and scored 44 points in an NIT quarterfinal win over North Carolina State.

This story has been corrected to show that Lipscomb is in the ASUN Conference, not the Ohio Valley Conference.