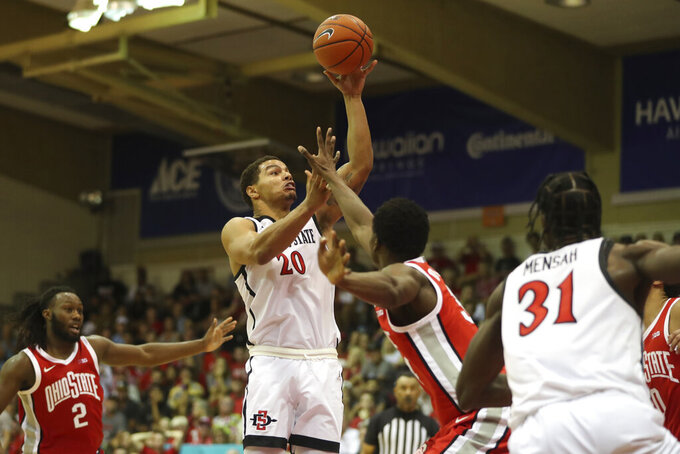 LAHAINA, Hawaii (AP) — Matt Bradley scored 18 points before fouling out in the final minutes and helped No. 17 San Diego State rally from a slow start to beat Ohio State 88-77 Monday night in the first round of the Maui Invitational.

Lamont Butler and Micah Parrish had 15 points apiece and Adam Seiko added 14 for the Aztecs (4-0).

Sean McNeil scored 20 of his 22 points in the second half for Ohio State (3-1), which was playing away from Columbus for the first time this season. Brice Sensabuagh scored 17 and Bruce Thornton 13.

Ohio State threatened to turn the momentum three times in the final minutes but the Aztecs answered each time.

Tanner Holden made a dunk and was fouled by Bradley, which was determined to be flagrant. He made both free throws to pull the Buckeyes to 80-72. Sensabaugh made one of two free throws for the Buckeyes before Parrish drained a 3 to give the Aztecs a double-digit lead.

Bradley fouled out with 2:53 left and Thornton made both free throws to pull the Buckeyes to 83-75

Darrion Trammell of SDSU then made two free throws with 1:49 left

In a crazy sequence with more than 13 minutes left, the Buckeyes closed within four points but then saw SDSU extend the lead back to double digits. Sensabaugh made a 3-pointer and there was a foul away from the play allowing the Buckeyes to keep the ball, and McNeil made a jumper to pull OSU to 51-47.

But the Aztecs came back to score eight points in less than a minute to jump ahead 59-47. Parrish had consecutive 3s and Butler had a steal and fed Aguek Arop for a layup. The Aztecs extended the run to 17-5 on a 3-pointer by Seiko.

Bradley made 4 of 6 3-pointers, including one to start the second half for a 40-26 lead. He scored 10 points in the first half, when the Aztecs missed their first eight shots and fell behind 5-0 before Seiko made a jumper about five minutes in to get SDSU on the board. Bradley began to heat up, including hitting two 3-pointers.

Seiko and Lamont Butler also hit big 3s to help the Aztecs to a 37-26 halftime lead.

San Diego State: This is quite possibly the Aztecs' deepest and most-experienced team and it showed once again. All nine Aztecs who played scored and had at least one rebound.

Ohio State will play the loser of the nightcap between Cincinnati and No. 14 Arizona.

San Diego State will play the winner of the Cincinnati-Arizona game.