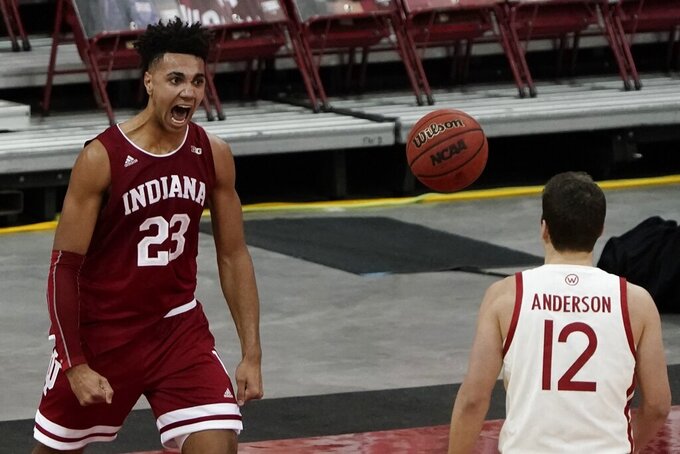 Wisconsin's Trevor Anderson watches as Indiana's Trayce Jackson-Davis reacts after making a shot and being fouled during the second half of an NCAA college basketball game Thursday, Jan. 7, 2021, in Madison, Wis. (AP Photo/Morry Gash) 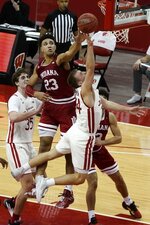 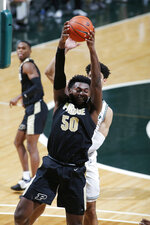 The only sound Stefanovic appreciates more is the silence of 17,000 screaming Indiana fans as he celebrates another victory.

While everyone understands Thursday night’s empty arena will not provide the traditional raucous atmosphere of this highly anticipated game, Stefanovic knows one thing won’t change — the intensity of this rivalry.

“You’re supposed to dislike each other," he said Wednesday. “That’s just how it is and that's how it always will be. Fans or no fans, it doesn’t matter. Both teams really want to get a win, we both need that win. We’re both physical, both tough, we’re both going to get after you. So fans or no fans, the rivalry is still there."

Stefanovic understands why so many people around the state of Indiana are invested in these games.

He grew up in Crown Point, a small city in northeastern Indiana. Purdue was his dream school though he often found himself playing alongside future Hoosiers like high school teammate Grant Gelon and 2018 Indiana All-Stars Damezi Anderson, Romeo Langford and Rob Phinisee. Only Phinisee, who grew up in the shadow of Purdue's campus in West Lafayette, is still on the Hoosiers roster.

But it's not just in-state guys, like Stefanovic, who get it. Outsiders learn the nuances of one of college basketball's fiercest rivalries, too.

Nationally, the Indiana-Purdue matchup may look like its lost some luster.

Things have changed mightily since the must-see television days of the 1980s and 1990s, when the Boilermakers, Hoosiers and their vociferous, iconic coaches routinely battled for Big Ten titles and in-state recruits.

In a season where as many as nine Big Ten teams already have been ranked in The Associated Press' weekly poll, neither the Boilermakers (8-5, 3-3) nor the Hoosiers (8-5, 3-3) have cracked the Top 25.

Still, writing them off with more than half of the conference schedule still to play would be a mistake. Purdue and Indiana trail No. 9 Wisconsin by one game, No. 14 Illinois by 1 1/2 games and No. 5 Iowa by two games. That means Thursday's winner will have the momentum to make a move up the standings.

And in Indiana, this is never just another game.

“I think all coaches would agree playing at home (without fans) is a huge disadvantage," Hoosiers coach Archie Miller said. “We haven’t played a ton of home games, but I think it will be disappointing we won’t have fans for one. In this type of game, I think both teams are focused on themselves and you have to be ready to roll."

For Miller, the Purdue games have been filled with consternation.

He's lost all six matchups since taking the Hoosiers job in 2017 though Indiana's struggles predate his arrival. Indiana has lost 10 of the last 11 to Purdue and the seven-game losing streak is its longest in the series since 1968-72.

Indiana guard Armaan Franklin could miss his third straight game with a sprained ankle, too. Miller called it a game-time decision.

A Purdue win, meanwhile, would give the Boilermakers a chance to tie the school record with a ninth consecutive victory in the March 6 rematch at Mackey Arena. The last time it happened came from 1929-35.

Plus, this season's two contests come with added importance after the football game between the two schools was canceled twice because of a COVID-19 outbreak.

So how can the Hoosiers stir things up? By making some noise Thursday night.

“With Trey (Galloway), Anthony (Leal), Khristian (Lander), all of them, they don’t know what it’s like to lose to (Purdue) and they don’t want to continue that tradition,” Indiana forward Trayce Jackson-Davis said, referring to the Hoosiers' freshmen. “The only way to do that is to beat them."