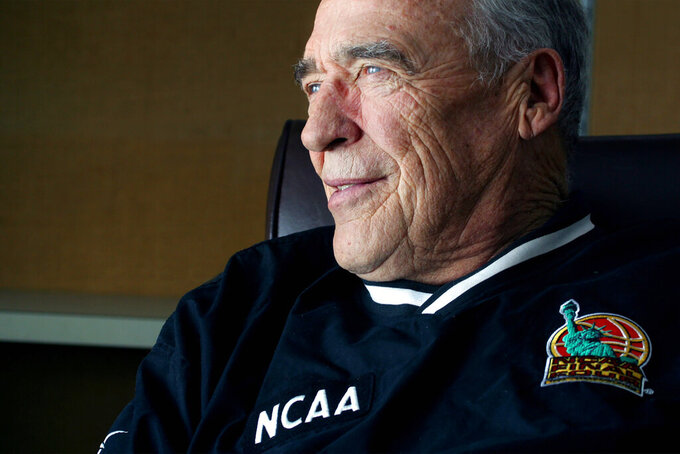 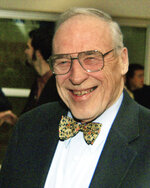 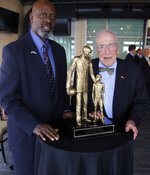 EMMITSBURG, Md. (AP) — Jim Phelan, the bow-tied basketball coach who won 830 games during nearly a half-century at Mount St. Mary's, has died. He was 92.

The athletic department at Mount St. Mary's said Wednesday that Phelan died overnight at his home in Emmitsburg.

Phelan spent his entire 49-season career at Mount St. Mary’s. He took the Mountaineers to 14 NCAA Division II tournaments, including five trips to the Final Four and a national championship in 1962.

A Philadelphia native, Phelan starred on La Salle’s basketball team before coming to the Mount in 1954. He planned to stay only a few seasons as a coach before moving on, but he grew to love the cozy town of Emmitsburg and ended up sticking around.

After moving to Division I, his teams made the NCAA Tournament in 1995 and 1999. He was inducted into the National Collegiate Basketball Hall of Fame in 2008.

“Coach Phelan is Mount St. Mary's basketball,” said Dan Engelstad, the current coach of the Mountaineers. “I found out the news after dropping my daughters at school as I was driving to campus. I thought about how fortunate I am to coach at the place that Coach Phelan built and grateful that he built it on family. I get to share his desk and I get to coach in the gym that he changed lives in — what an honor.”

Phelan shunned several offers from bigger colleges and suffered through the indignity of being rejected for consideration at his alma mater.

“I had been here five or six years, and my name came up for the job,” he said. “But then someone of influence there said: ‘No way he should be considered. He wears that stupid bow tie.’”

Phelan decided to stick with the ties and stay in Emmitsburg. And La Salle missed out on landing one of the finest coaches in the history of the game.

“He taught me how to shoot the ball, he taught me discipline, he taught me about life itself,” former Mount St. Mary's standout Fred Carter said a few days before Phelan won his 700th game in 1993.

Shortly after seeing Carter play in Philadelphia, Phelan talked him into leaving the big city for Emmitsburg. Carter, who later played in the NBA and became coach of the Philadelphia 76ers, was the first Black student to enroll in the small, private Catholic school.

Toward the end of his career, when he was a good 45 years older than the players he coached, Phelan deftly handled the generation gap.

“When the players first get here, they seem to regard me as a dinosaur, a fossil,” Phelan said. “They usually spend the first part of their freshman season relating to the assistant coaches. Then, after a while, they realize that I’m not exactly a senile old grandfather.”

When Phelan retired in 2003, coaches around the country honored him by wearing bow ties. The Northeast Conference has a coach of the year award named after Phelan.

In addition to coaching basketball, Phelan coached the baseball team at Mount St. Mary's from 1955-65 and served as athletic director from 1967-89.

“For 49 seasons, Coach Phelan formed student-athletes who embodied the Mount’s mission statement by having a passion for learning, being ethical leaders and serving God and others,” Mount St. Mary’s President Timothy Trainor said. “Everyone who met Jim loved him, especially his student-athletes and his family. He touched the lives of thousands of Mounties and summer basketball camp attendees.”

A memorial service for Phelan is scheduled for June 24 at Knott Arena, where the Mountaineers play. The court there is named in his honor.