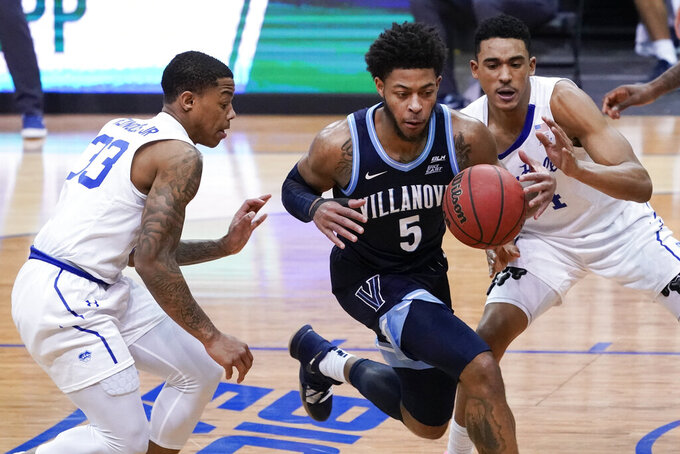 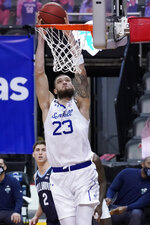 NEWARK, N.J. (AP) — Even when No. 3 Villanova went up by 16 points in the second half, Jay Wright never felt comfortable against Seton Hall.

The two longtime Big East rivals have played nothing but close games lately and the Wildcats coach had a feeling the Pirates had a run in them. It was one of the few things he was wrong about this season.

Jeremiah Robinson-Earl scored 23 points in a foul-plagued 21 minutes and Villanova rolled to ninth straight victory with an unexpectedly easy 80-72 decision over Seton Hall on Saturday.

“I didn’t think of this one as not being one of the close ones because I know how good they are and I know they can always make a run at us,” Wright said. "So the history of this rivalry is such that you just you never, ever feel comfortable, you know? And I definitely felt that way tonight.”

Jermaine Samuels added 17 points and Justin Moore had 16, while Collin Gillespie had 11 points and a career-high 11 assists.

The Wildcats (11-1, 6-0 Big East) built a double-digit lead midway through the first half and were really never threatened in handing Seton Hall (9-8, 6-5) its third straight loss to a ranked opponent.

Robinson-Earl finished 8 of 12 from the field and hit all five of his free throws. He missed 14 minutes in the second half after picking up his third and fourth fouls early, but returned for the final three minutes and scored six points to seal the win.

“He scored 23 points, but he is so good defensively and he’s the centerpiece of our defense,” Wright said. “He can guard any position, but he also communicates out there. He’s always talking. So that’s what we really missed when he was out.”

Shevar Reynolds had 13 points and Jaren Rhoden, Sandro Mamukelashvili and Myles Cale all scored 12 points for Seton Hall. The last five games between the Pirates and Wildcats had been decided by an average of 3.2 points.

The Pirates' previous two losses overall were close. They endured a crushing last-second setback to Villanova on Jan. 19. It was followed by a four-point loss to No. 17 Creighton on Wednesday in a game the Hall blew a 16-point second-half lead.

This one was decided in the opening 13 minutes. With the game tied at 9, the Wildcats went on a 16-3 burst that featured five points apiece by Robinson-Earl and Moore.

“I know we didn’t play good, but the loss the other night was tough,” Willard said of the Creighton game. "I thought we played hard, did some good things, but we had a hard time mentally getting going early in the game. Against a good team like Villanova, they’re just going to keep attacking.”

Villanova: This was a methodical victory by a smart team. Everyone contributed on both ends of the court despite the team playing only its third game this month. A game earlier this week was postponed by COVID issues with the officials.

Seton Hall: The Pirates have played one of the toughest schedules in the country, but have not posted a signature victory that might convince people they belong in the NCAA Tournament.

Villanova hit 10 3-pointers in the game. In its loss to Creighton earlier this week, the Pirates gave up 17 from long range.

“I would call it terrible, and that’s an improvement from horrific the other night," Willard said. "It’s mind-boggling. We’re doing a lot of good things. We’re in position and we’re just having little breakdowns at really bad times with the wrong guys. That kills you against really good teams.”

Villanova: at St. John's on Wednesday.

Seton Hall: at Providence on Wednesday.