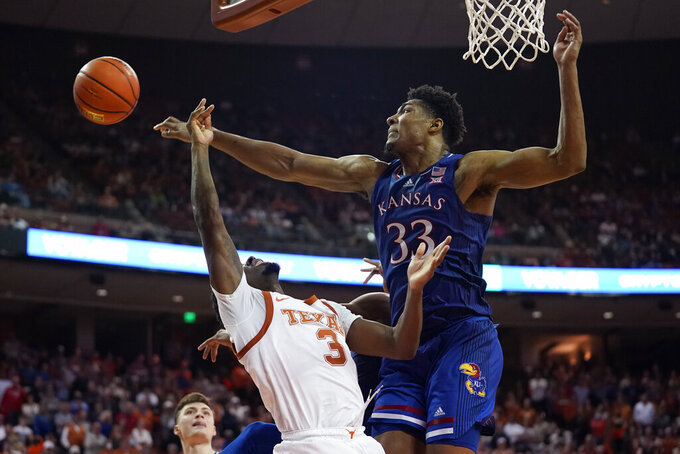 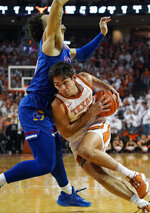 The No. 20 Longhorns tightened up the Big 12 standings Monday night with an intense 79-76 win over No. 8 Kansas as they made the late plays and shots to overcome a blistering second-half shooting effort from the Jayhawks.

The Longhorns earned the biggest win so far for first-year coach Chris Beard, but the coach and players shrugged off the moment as one of many to come.

“It's good for us but it's not the biggest thing in the world," said Allen, who scored 24 points in an impressive all-around performance. “We have higher goals than just beating somebody on our home floor."

Texas outscored Kansas 7-0 in the final minute. The Jayhawks led 76-72 before the Longhorns' Tre Mitchell, who had missed all five of his 3-point attempts, banked one in to get the Longhorns within one.

Kansas then turned it over when Ochai Agbaji’s lob to David McCormack bounced off the front of the rim and Texas snatched the rebound. The Jayhawks then left Allen open just beyond the free-throw line for the go-ahead basket.

“I cut to my spot and I just raised up and shot it,” Allen said. “I like the midrange jumper, so I was happy about it.”

Kansas still had a chance to take the lead but Carr's steal and free throws with 6 seconds left sealed the victory, Texas' third in a row over the Jayhawks. Texas swept Kansas in the regular season last season.

Texas led 40-35 at halftime on a twisting floater from Andrew Jones before a Jayhawks turnover set up Carr's buzzer-beater 3-pointer. Texas had missed its first 10 long range attempts before Carr swished from the right wing.

Kansas struggled in the first half to find the free-flowing offense that can flip a game in a flash. Texas guard Courtney Ramey didn't score a point in the half, but his lockdown defensive effort on Agbaji held the Jayhawks guard to just seven points on just five shots in the half.

But Kansas kept pecking away and a hot shooting start to the second half — the Jayhawks made nine of their first 12 shots — eventually put them ahead on Josef Yesufu's steal and dunk. Kansas shot 64 % in the second half against the No. 1 scoring defense in the country.

“I thought it was going to be a rock fight and (scoring) in the 50s,” Kansas coach Bill Self said.

Kansas: The Jayhawks were sloppy with the ball in the first half against Texas' relentless defense and paid for it. Kansas surrendered 24 points on 15 turnovers in the game. The final turnover from Dejuan Harris came as Kansas still had a chance to shoot for the win before Carr's free throws.

Texas: Physical play by Allen, Mitchell and Bishop let Texas hang with the bigger Jayhawks inside. Allen had nine rebounds and Bishop had 10, including seven offensive boards. Mitchell scored 10 straight points in the first half as the Longhorns rallied from an early 18-11 deficit.

Aside from his lock-down defense on Agbaji, Ramey delivered some huge baskets for Texas in the second half. Kansas led 67-62 when Ramey delivered consecutive layups and converted a 3-point play to keep Kansas from pulling away.

TIP-INS Texas made 20 of 23 free throws to overcome just 3-of-20 shooting from 3-point range ... The Longhorns had 15 offensive rebounds to set up 13 second chance points ... Texas also protected the ball, giving up just six turnovers.

Texas: The Longhorns play at No. 10 Baylor on Saturday.