Arkansas hangs on for 75-71 win over 13th-seeded Vermont 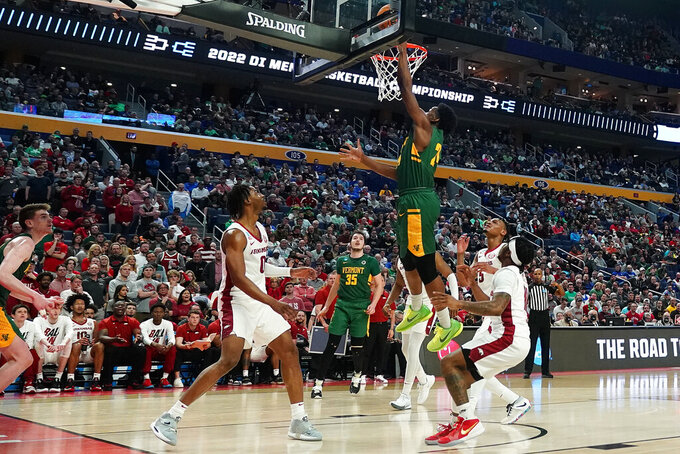 Vermont guard Ben Shungu (24) shoots against Arkansas during the first half of a college basketball game in the first round of the NCAA men's tournament Thursday, March 17, 2022, in Buffalo, N.Y. (AP Photo/Frank Franklin II) 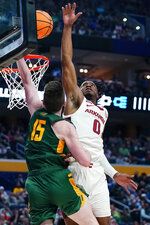 BUFFALO, N.Y. (AP) — Stanley Umude had 21 points, JD Notae scored all 17 of his in the second half, and No. 4 seed Arkansas hung on for a 75-71 victory over 13th-seeded Vermont in the first round of the NCAA Tournament on Thursday night.

Jaylin Williams had 13 points and 10 rebounds for the Razorbacks (26-8), who a year ago reached the Elite Eight before losing to eventual champion Baylor. Arkansas advanced to face the West Region’s No. 12 seed, New Mexico State, which knocked off Connecticut.

Two-time America East player of the year Ryan Davis and Ben Shungu scored 20 points each for the Catamounts (28-6).

Coach Eric Musselman said it’s not unusual for Notae, the team's leading scorer, to score most of his points in the second half, especially in games he picks up two fouls in the first half and sits, as happened against Vermont.

“I just believe the last 10 minutes of the game are so important that I want to have my best players available,” Musselman said. “I told him at halftime, `My man, I’m going to you. We’re running all the sets for you that we hadn’t run the first maybe 31 minutes of the game.‘”

Notae responded by scoring Arkansas' opening basket of the second half, and then bookending the final 20 minutes by sinking two free throws to seal the win with nine seconds remaining. Vermont’s final possession ended with Finn Sullivan missing a 3-point attempt, allowing Arkansas to run out the clock.

“Just got to be more aggressive. I feel like I settled too much in the first half,” Notae said. “Second half, I got downhill a little more, made plays for my teammates.”

Give credit to backup Davonte Davis, who scored 10 of his 14 points in the first half mostly playing in place of Notae.

After trading the lead seven times overall and six times through the opening 10:13 of the second half, Arkansas never relinquished the lead after Umude hit two free throws to put the Razorbacks ahead 52-51 with 9:34 remaining.

Arkansas’ largest lead was 67-58 when Notae completed a hard drive into the paint with 4:26 remaining. But the game eventually came down to free throws.

“Disappointing with our season ending, but I couldn’t be more proud of my team,” Vermont coach John Becker said. “We wish we could have shot free throws better. We wish we could have rebounded a little bit better at the end, but these guys left it all out on the court against a really, really good Arkansas team.”

The Mountaineers, who won three games in the America East Tournament by a combined margin of a whopping 110 points, came up against a far more defensive-minded opponent in the Razorbacks.

Arkansas limited its opponents to 64.6 points per outing and shooting 38.7% from the field as it entered the tournament winning 15 of 18 games.

Trailing 73-71, the Catamounts appeared to have life when Isaiah Powell and Finn Sullivan surrounded Notae on an inbounds pass and appeared to force a turnover with the ball bouncing out of bounds with 9 seconds left. Officials, however, reversed the call by awarding the ball to Arkansas.

“You obviously want it to go your way. It was overturned, and that was it,” Shungu said.

Arkansas coach Eric Musselman made himself at home in Buffalo by wearing Bills, Sabres and Triple-A Bisons shirts this past week. The former NBA coach’s fascination with Buffalo began with the Marv Levy-coached Bills, who lost four straight Super Bowls in the early 1990s.

It was during the pandemic when Musselman said he began contacting teams — including the Bills — to send their clothing, which he wore during practices. He decided to pack the clothes upon learning the Razorbacks were heading to Buffalo.

Vermont heads home after entering the tournament winning 22 of 23 and eight straight since a 75-74 overtime loss at Hartford on Feb. 14. The Catamounts’ tournament record dropped to 2-8.

Arkansas overcame Notae missing all four field-goal attempts and two free-throw attempts in the first half. Notae entered leading the team in scoring at 18.4 points per game.