Beard builds transfer-heavy lineup for debut at No. 5 Texas 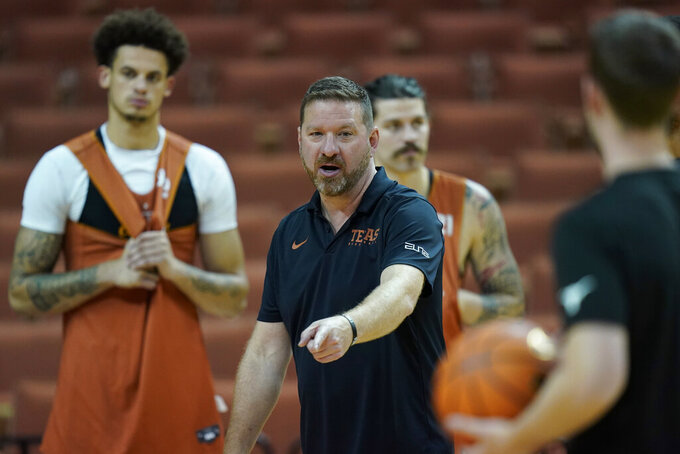 AUSTIN, Texas (AP) — When Chris Beard left Texas Tech for Texas, one of the coach's first moves was to plunge into the transfer portal and leave the door wide open.

Soon, players were pouring into Austin.

Beard starts his first season with the fifth-ranked Longhorns with a roster loaded with transfers who collectively bring more than 750 games and nearly 8,000 points and 3,000 rebounds to their new program.

This was no rebuilding year with a new coach. This was a guy going out and grabbing an arsenal to try to take the Big 12 title right away. Add those transfers to the four veteran players who return, including Andrew Jones, an elite scorer, and Big 12 coaches picked Texas among the league favorites.

“I think we'll be one of, if not the most, experienced teams in college basketball,” Beard said. “That was by design this first year. We think we can be more than relevant early ... I'm talking about putting together a team this first year that can be part of the fight.”

The Big 12 coaches selected Carr at the leagues preseason newcomer of the year. He ranked third in the Big Ten in scoring last season with 19.4 points per game to go with 4.9 assists.

Beard said he had “about four screens” constantly watching the transfer portal and he and his assistant pounced when players went in. Texas helped recruit itself, Beard said.

"“That’s why I took the job,” Beard said. “The brand is real. There was some confidence coming in that we could put a (talented) team together.”

Beard led Texas Tech for five seasons, leading the Red Raiders to the Elite Eight in 2018 and the NCAA Tournament championship game in 2019, when he was named The Associated Press Coach of the Year. He jumped at the chance to coach at his alma mater when Shaka Smart left the Longhorns for Marquette after six seasons and no NCAA Tournament wins in Austin.

Beard also had a word of caution for his new players hearing how good they look in burnt orange.

“It’s rat poison," said said, “until we get out there and back it up."

Tyson initially signed with Beard at Texas Tech in December 2020 but never played there and followed him to Austin. Tyson was a consensus top 40 recruit nationally out of John Paul II high school in Plano, Texas.

Texas has plenty of time to build chemistry among all the newcomers. Texas opens Nov. 9 against Houston Baptist. After a trip to face last season's national runner-up and preseason No. 1 Gonzaga on Nov. 13, Texas has only two more major conference matchups against Seton Hall and Stanford before the Jan. 1 start of Big 12 play at home against West Virginia.